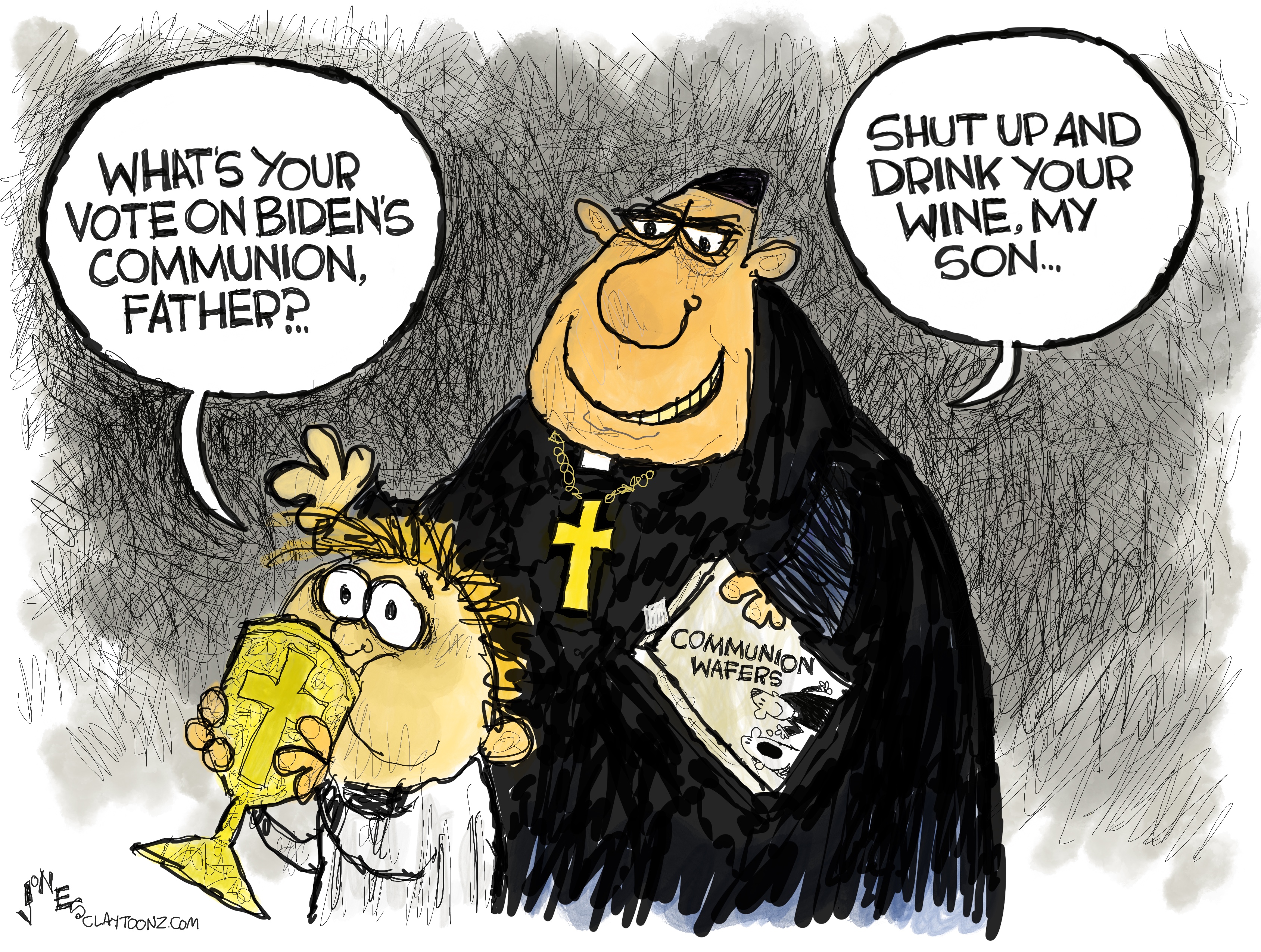 On Friday, U.S. Catholics advanced a measure to deny communion to politicians who support abortion rights.

In case you’re not a Catholic, a really bad Catholic, or just someone who doesn’t know much about what other religions do, communion is a ceremony of the breaking and eating of bread which symbolizes Christ’s body and drinking wine to symbolize his blood. When you actually think about it, it’s kinda weird. Eating flesh and drinking blood? Even the Church of Satan doesn’t do that. But then again, Christianity does believe a zombie Jesus rose from the grave.

Anyway, The U.S. Conference of Catholic Bishops moved forward this measure with 73 percent of votes in favor from their membership. While they say this isn’t about one guy, it is. It’s about President Joe Biden, the nation’s second Catholic president. While a president (sic) such as Donald Trump is a member of a religious faith, he wasn’t the first president to use it just as a political prop. Joe Biden, like Jimmy Carter, is deeply religious. He actually believes in what he says and is a practicing Catholic. Unlike Trump, he actually goes to church.

Now, the Catholics want to punish one of their own by denying him communion. President Biden, not wanting to get into a war with the Church, said it’s a “personal thing.” But, this move will fail. The Catholics in the capital say they will not deny communion to the president of the United States of America. Seriously, if the president wants a cracker, you give him a cracker.

Besides, his dog just died. What sort of assholes want to deny him his religious beliefs the same day his dog dies? Catholic assholes, that’s who. All dogs go to Heaven.

Archbishop Salvatore Cordileone of San Francisco, the home diocese of House Speaker Nancy Pelosi, who is a Catholic Democrat, said bishops would not be taken seriously if they did not create the communion document. He said, “Our credibility is on the line. The eyes of the whole country are on us right now.”

Really? Your credibility is on the line? Then why didn’t you denounce former Attorney General William Barr and deny him communion for believing in the death penalty? Oh, that’s right. The Catholic Church is against the death penalty. They were also against the Trump administration’s hardline stance in immigration and deportations, going so far to call them racist. But, where are the denouncements of pro-death Republican Catholics?

This is also an organization that hid sexual abuse by priests of young children for decades. Not years, not months…decades. And they’re still hiding it.

If anything, this reinforces the argument that churches in this country need to pay taxes. Fundamentalists literally campaigned for Donald Trump, with many believing he was sent by God (and Trump even retweeted that he was the “second coming”), and casts Democrats as “demoncrats.” Now, the Catholic Church wants to play politics and go after the president and other Democrats, while ignoring Republican Catholics who support the death penalty and baby jails?

Congressman Ted Lieu, who is also Catholic, pointed out that the Catholic Church is hypocritical. And while a majority of Bishops want to punish Biden for his stance on abortion, the majority of American Catholics are pro-choice. Even Pope Francis has come out against this move.

Aren’t you supposed to let sinners into your church? Even if Biden isn’t a good Catholic, shouldn’t you still want him, the President of the United States, in your house to worship? Isn’t denying him communion an attempt to ostracize him from your faith?

And about abortion: Being pro-choice is not being pro-abortion, just like being pro-life isn’t actually pro-life. How can you claim you’re pro-life while supporting the death penalty? Oh, yeah. Hypocrites.

This is why I’m not religious. I was born Catholic and partly raised in that faith as well as Baptist. Now, I’m a non-practicing agnostic. I say I’m agnostic because full-fledged atheists have made a religion out of atheism when I thought half the point of it was not having meetings and getting to sleep late on Sundays. Also, atheists love trying to convert people to atheism. I have no interest in converting people.

I respect your faith but I don’t have a lot of respect for organized religion. If you want your religious beliefs respected, maybe you should start by respecting others’ religious beliefs. Leave President Biden alone. Don’t mess with his communion. What would Jesus do?

Now, time for a pop quiz: If you truly believe Donald Trump, Mr.-Pussy-Grabber-Two-Corinthians, who had five kids with three different women, three divorces (I can see the future on this shit), and over 25 accusations of sexual assault, was sent by God….Quick! Tell me what church he belongs to.

Creative note: I was afraid this might be too subtle, but Laura, one of my copy editors, told me it was as subtle as a “pie in the face.”

Notes on my book, Tales From The Trumpster Fire: I have two copies of my book in stock, which I’m selling for $45.00 each, signed. Also, I have copies of my first book from 1997, Knee-Deep in Mississippi available for $20.00.