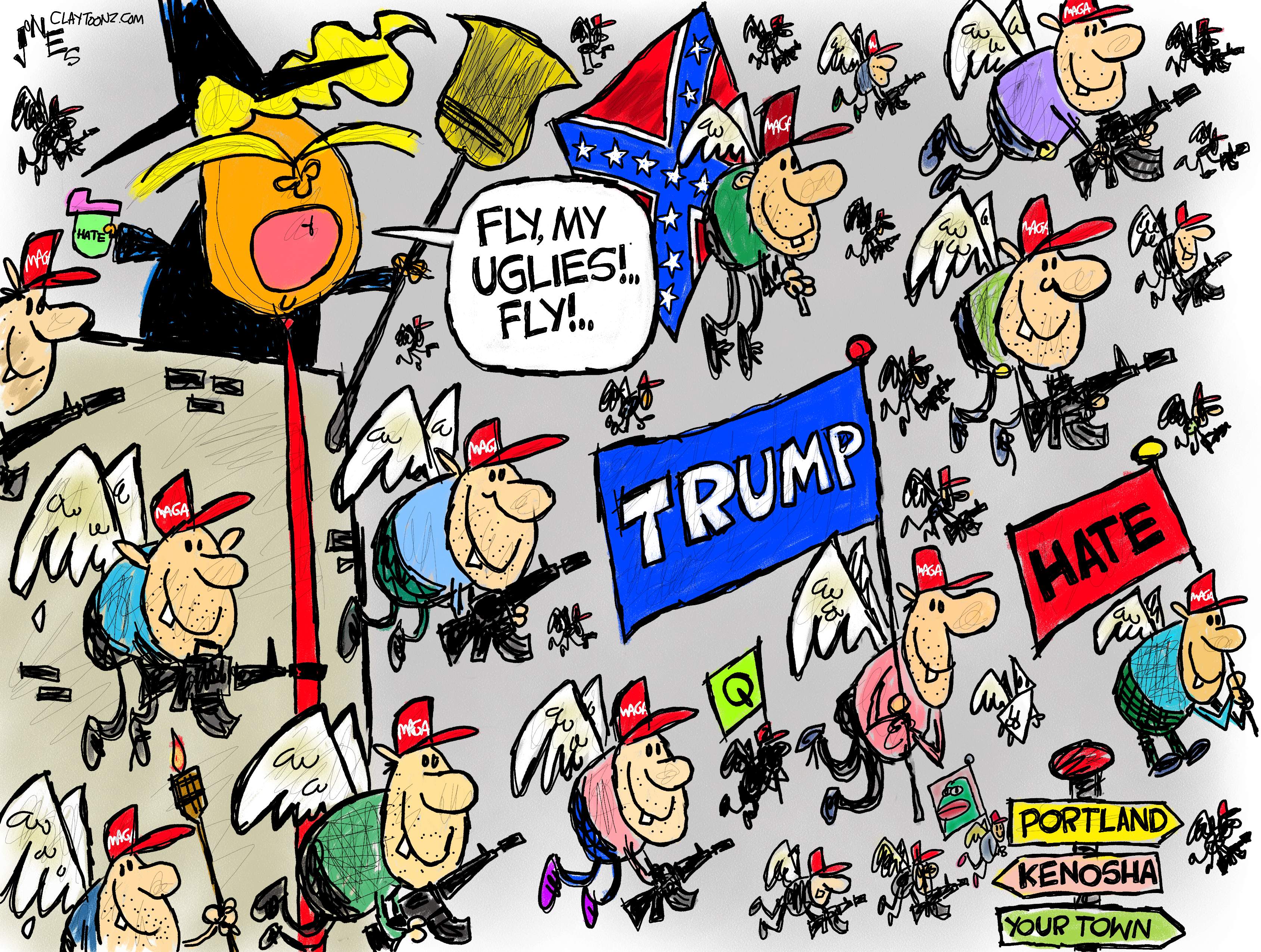 Full Disclosure. I drew a “fly, my pretties” cartoon last April. I was concerned it may be too soon for a repeat but one of my amazing proofers, Laura, told me, “April was forever ago and this is good.” Honestly, I went with this because I liked the phrase, “Fly, my uglies” too much.

While it’s horrible that a person, a Trump supporter, was killed in Portland, it was Donald Trump who sent him there. A caravan of Trump supporters in pickup trucks assembled in the suburbs of Portland, Oregon, on Saturday night. Then, they took to the city to shoot paint balls at Black Lives Matter protesters. There has been no condemnation of this by Trump or Republicans. Don’t expect liberals to start calling the murderer in Portland a hero or start a GoFundMe campaign for his legal defense.

Joe Biden has disavowed violence. Yesterday, he criticized it on both sides.

Biden said, “I condemn this violence unequivocally. I condemn violence of every kind by anyone, whether on the left or the right. And I challenge Donald Trump to do the same. It does not matter if you find the political views of your opponents abhorrent, any loss of life is a tragedy. Today there is another family grieving in America, and Jill and I offer our deepest condolences.” Donald Trump has not met that challenge, instead tweeting, “Law and order” and “MAGA” multiple times. Donald Trump continues to tweet calling for Biden to disavow violence, which he has, while not doing so himself.

Violence is violence. There shouldn’t be left-wing or right-wing violence. Donald Trump sees violence and he decides which is on his side and which will help his reelection. Donald Trump is a horrible and vile human being.

In his 2016 acceptance speech, Donald Trump said, “a government that fails to defend the lives of its own citizens is a government unworthy to lead.” But again, Donald Trump doesn’t believe cities are in his country, or at the very least, they’re not his base.

Portland Mayor Ted Wheeler is catching heat for criticizing Donald Trump for inciting the violence. Many think he needs to be working with Trump. But when cities and states reject Trump’s offer of federal help, what they are rejecting are Donald Trump’s goons.

But Wheeler was right in calling Trump out for what he is. We can’t coddle this orange troll any longer. Wheeler is being criticized for stating the truth.

The Portland Mayor said, “Do you seriously wonder, Mr. President, why this is the first time in decades that America has seen this level of violence? It’s you who have created the hate and the division.”

Even before he was done speaking, Trump was trolling him on Twitter.

Joe Biden said, “Trump may believe tweeting about law and order makes him strong, but his failure to call on his supporters to stop seeking conflict shows just how weak he is.” He also said, “He may think that war in our streets is good for his reelection chances, but that is not presidential leadership or even basic human compassion.”

Donald Trump is a weak little man. In fact, he’s a baby who needs a sippy cup. Donald Trump will allow America to burn for his own self interest and what makes that worse is he has supporters who refuse to see that obvious fact.

Donald Trump is the most divisive figure in American history and Wheeler is correct for calling him out on it. Donald Trump, the worst president in American history, will destroy this country for his own selfish needs. If he wins, his destruction will carry on. If he loses, expect him to incite his flying uglies even further.

Donald Trump is destroying our country.

Note: The “Flying Uglies” would be kick-ass name for a punk band.