Note: I already posted all these pictures on Faceook so my apologies if you’ve already seen them.

I am in New York City, in case you didn’t already know that. Early this evening, around 7:30 P.M. (I remember making a note in my head that it was an hour after Trump’s stupid Rose Garden press statement), I went out to get something to eat and maybe find a protest. Never got anything to eat. One block from my hotel, I ran into this. 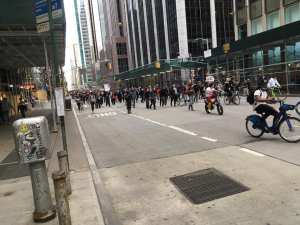 This was on 6th Avenue near Rockefeller Center.

The crowd seemed to be in the thousands. At this stage, the police were behind them. 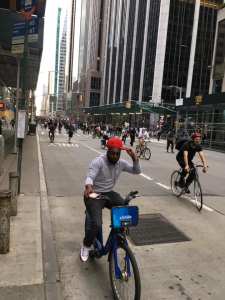 This was one of the first photos I took. This young man screamed after he passed me asking if I videotaped him. I said it was just a picture and he seemed cool with it. After that, I asked nearly everyone for permission before I took their pictures. Nobody said no. There were hundreds of people taking photos and filming. I was asked multiple times if I was a cop. 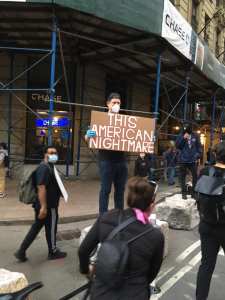 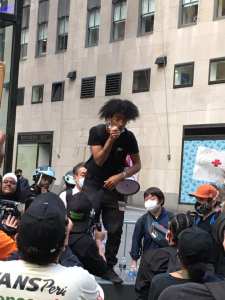 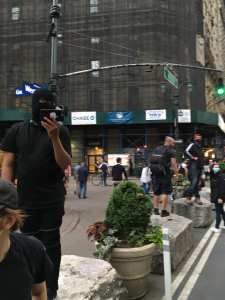 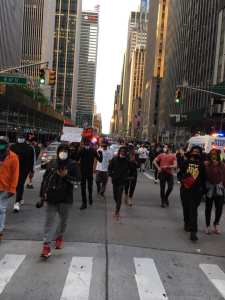 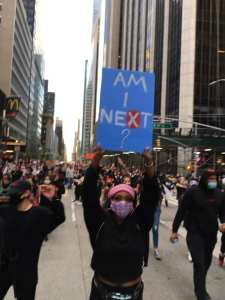 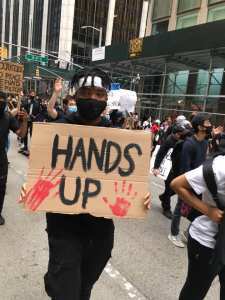 Up to this point, it was all pretty lovely. Every person I met was friendly. Other than being asked if I was a cop (I was probably the oldest person participating), everyone was nice to me. Two young black ladies thanked me for marching with them. One of them fist-bumped my elbow. 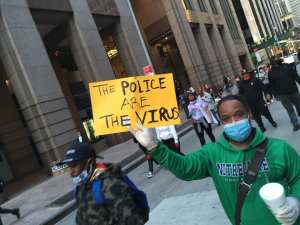 I had a nice conversation with this young man, who asked me if I was a cop. He told me his name which I’m not going to publish. Soon after this, the march turned and went down a different street which it kept doing to frustrate the police. Then it got dark. Then it got scary.

The police formed a line trying to direct the crowd where they wanted them to go. The crowd wasn’t pleased with it. This black female officer kept her poise as marchers shouted at her for her “betrayal.”

This guy did NOT seem to like me. Before, the police were marching  behind the crowd or on the sidewalks next to them. Then, the batons and shields came out and the crowd hadn’t done anything to provoke other than chant and scream at cops. 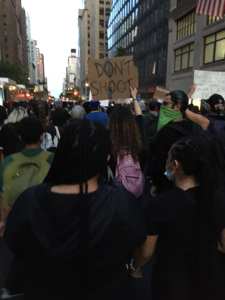 There were jamming the crowd up here, making it tighter. At one point, a large number of protesters turned around and ran. That was the first time I was afraid. I couldn’t see what was happening but others told me the police freaked them out briefly. They stopped running and went back to marching. Around this time, I heard some loud booms (versus quiet booms). I thought maybe it was Cloverfield and I was way too far from the Brooklyn Bridge. Wait. That didn’t work out in the movie. 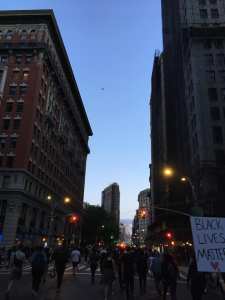 That helicopter followed us all the way. At this point, and after walking for 30 blocks, I decided I had enough photos and experience from the event that I could go back to my hotel and find food along the way. It was time to goodbye to the marchers. Or so I thought. And, I never found food.

I walked for a while enjoying the cool weather, watching where the helicopter was hovering, smelling marijuana throughout my journey, and all seemed peaceful. Then I ran into this. The Yankees store had been looted. Before I took the pic, there were caps and jerseys all over the ground. When I showed up, three young men were leaving from inside the store and dropped merchandise. The people who were walking along with me picked them all up. One young lady was directing her boyfriend which jerseys to get. He got a T-Shirt with some player’s name on it and she said, “No, not that guy.” Picky looters.

I didn’t see any more damage for two or three more blocks. All I saw were hangers from the Yankees store. Then I got to Best Buy and the looters were still inside. I was not going to take their pictures because I didn’t want to get beat up. As one young man rushed inside, after all the other looters had exited, his friends started screaming for him to get out because the NYPD was on the scene. Then, there was a stampede and I ran inside a doorway so I wouldn’t get trampled. That was the scariest part of the night. I went another block and they directed me and a few others to go down a side street. Even as we were about 20 feet away, the police were still screaming at us. I was slightly afraid here.

This is on the corner of 6th and 51st, half a block from my hotel. The cops wouldn’t let me go down to my hotel. The next intersection was blocked too. I thought maybe I could explain to the cops that I only wanted to get back to my room before the 11:00 PM curfew. It was 10:30 at this point…and no go. All I got were more screaming cops. And that was a lot of cops. 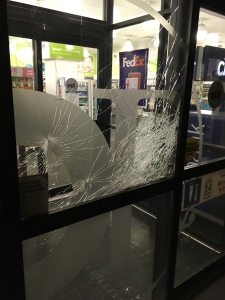 This is right next to my hotel. It didn’t look like anyone had gotten in. I’m really hoping the sandwich place on the other side of my hotel wasn’t hit.

And here’s a little video taken in front of the looted Best Buy. That was a lot of cops.

I finally got back to my hotel with nothing to eat except cheese balls. Leave it to me to come to New York City during a pandemic, riots, and when you can’t find anything to eat in Manhatten after 10:00 P.M.

Perhaps the best gift I got for my birthday is that I didn’t die.

On another note: Earlier in the day near Times Square, I saw three guys opening a manhole and going down. I told them to watch out for C.H.U.D.s. They looked at me like I was crazy and they had never heard of C.H.U.D.s before. How do you go down into the sewers of New York City without having heard of C.H.U.D.s?