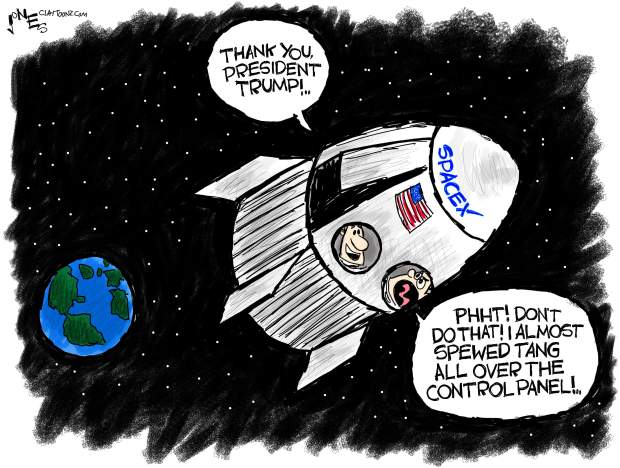 You may want to sit down for this as it will come as quite a shock. Donald Trump is taking full credit for Saturday’s NASA and SpaceX launch of astronauts from U.S. soil. Actually, the only shock here is he’s not taking credit for the U.S. landing a man on the moon in 1969…yet.

After the launch at Kennedy Space Center, Trump launched into some bullshit speechifying. He said, “There was grass growing through the cracks of your concrete runways — not a pretty sight, not a pretty sight at all.” He is literally blaming previous presidents for not cutting the grass.

He continued. “With this launch, the decades of lost years and little action are officially over. Past leaders put the United States at the mercy of foreign nations to send our astronauts into orbit — not anymore. Today we once again proudly launch American astronauts on American rockets — the best in the world — from right here on American soil.”

There was no way in hell Mike Pence was going to miss out on the opportunity for some heavy ass-kissing and gaslighting. The nation’s poster boy for teacher’s pet said, “Today is the culmination of three and a half years of renewed leadership in space.” Every time these sycophants talk about Trump and praise him, the word “leadership” is used. Maybe that word gets such heavy use because leadership from this administration is a void deeper than space.

Unfortunately, Pence continued and said the launch was “a tribute to the vision and leadership of a president who, from the very first days of this administration, was determined to revive NASA and American leadership in human space exploration.” Fuck. “Leadership” again. Pence even got it in the same sentence twice. He probably snores the word waking up Karen sleeping in the other room.

Just like with the economy, stock market, and jobs, Donald Trump takes credit for stuff that started long before his orange ass started making stains in the White House.

If you’re a Trump supporter, you’re gonna wanna sit down for this. This launch isn’t from any vision Donald Trump had because we sent astronauts into space, not Nazis with hamberders. This is the culmination of years of work that began from efforts in the George W. Bush administration and carried through by the Barack Obama administration.

NASA Administrator Jim Bridenstine said, “This is a program that demonstrates the success when you have continuity of purpose going from one administration to the next.” The dude must not have received the sycophant-leadership memo. I’m sure Pence has a spare copy somewhere he can loan him.

In 2006, the Bush administration started a program to get commercial companies to begin delivering cargo to the International Space Station. The idea was to save taxpayer money and give incentives to private companies to develop spacecraft. That’s vision. In 2012, the first shipment from a private company, SpaceX, was delivered to the International Space Station. It took six years. But I guess Trump is so awesome with leadership that it would only take three.

The program to send human beings back into space from U.S. soil was started in 2010 under President Obama. In case you’re a Republican, that was ten years ago. These were not “lost years of little action.”

Literally, SpaceX and NASA have been working together on both these projects for well over a decade yet somehow, we should only thank Donald Trump who came into office in 2017.

In 1962, President John F. Kennedy said, “We choose to go to the Moon in this decade and do the other things, not because they are easy, but because they are hard.” Donald Trump doesn’t do hard. His solution to the coronavirus is to ignore it, lie about it, and hope it just “disappears.” His response to riots in over 100 American cities is to try to create more riots, criticize Joe Biden for being in his basement, then as protesters approach the White House, to hide in the basement. Seriously. He hid in the White House basement while tweeting about “vicious dogs” and “ominous weapons.”

President Kennedy was a leader with a vision. He challenged the nation to put a man on the moon in 1962. The nation achieved that goal in 1969 under the presidency of Richard Nixon. Landing a man on the moon would not have happened in 1969 if we waited for Nixon. Trust me. We wouldn’t have put two men into space from U.S. soil last Saturday if we had waited for Donald Trump.

The accomplishments that have Donald Trump’s name on them are the coronavirus pandemic, the over 100,000 dead, the 40 million lost jobs, and race riots in over 100 cities. That’s Donald Trump’s legacy. Instead of standing like a centaur with a ducktail watching a rocket launch, he should go out on the White House balcony and see the shitshow he’s created. It’s in his yard and he’d have a great view.

For me, this isn’t just that I don’t want Donald Trump to take credit where it’s not deserved. It’s much serious and scarier than that. This is fascist propaganda. This kind of gaslighting and ignoring the past is what one would expect from North Korea, not an American president.

Creative note: I’m in New York City. I got this idea yesterday while walking past Trump Tower.