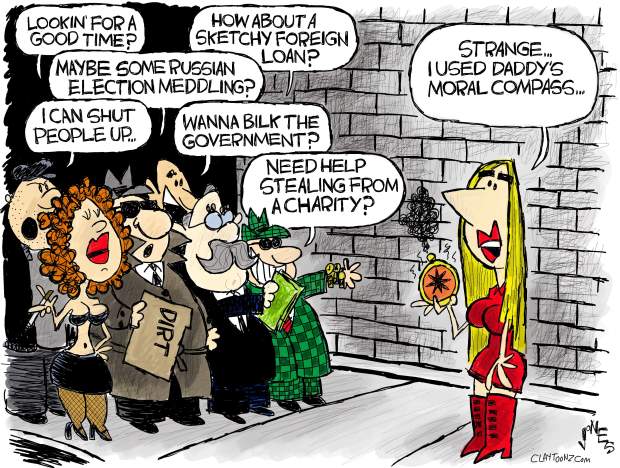 Nobody’s perfect but each of us has at least one person we respect and look up to. For me, one of those people is my older brother, Jimmy.

Jimmy’s nine years older than me and was the only older male who was a constant figure in my life when I was a kid. He took me in when I was a teenager and gave me a home, even though he couldn’t afford it. Jimmy never told me how to act or treat people. He never stood on a soapbox and gave me lectures. But, he set examples that I followed, even if he didn’t know it. Every time my parents couldn’t be there for me or let me down, Jimmy was there, even if he was living in another state. The biggest thing I retain from him is the way he treated other people. He wasn’t a person who passed judgement on others, which of course, is something I do a lot. But, I still try to emulate my big brother, even if he’s a big dork with lots of bad jokes.

The people who set examples for me in my career are the ones who gave me my start. The Howell family, John, Rupert, and Rita instilled in me the ethics and morals of journalism, mostly by example.

I would never say I got my moral compass from my parents. They weren’t evil people by any means, I respect them for being my parents, and I know they loved me. But, as I grew older, I questioned their lack of honesty, loyalty, and integrity. I didn’t meet my father until I was 21, and I rarely even heard from him. All that was his choice which rules him out as a person for me to get morals from. I can be honest with myself when it comes to my mother and father. They gave me lots of examples of what not to do. But, I understand that most people get their morals from their parents.

When asked at a fundraiser in Jackson Hole, Wyoming, to name the personality traits she inherited from her parents, Ivanka Trump said that her mother gave her an example of how to be a powerful, successful woman (they both married rich douchebags). And her father?

Trust-fund Barbie said Donald Trump passed onto her his “moral compass.” I hope you weren’t taking a sip of anything when you read that.

Donald Trump, the guy who steals from charities to purchase oil paintings of himself, who cheated on all three of his wives, who asked Russia to help him win the presidential election, who paid hush money to porn stars and playmates so they wouldn’t tell anyone of their affairs, who cheated contractors out of payment, who kept illegal workers on the payroll while he screamed about illegal immigration, who’s made baseless accusations against opponents and critics, who tweets childish insults at anyone who questions him, who claims the media is lying when they tell the truth and that they’re the “enemy of the American people,” who uses his businesses to profit from the presidency, who borrows money he never pays back, who’s told over 12,000 lies since he became president, who has destroyed careers to protect himself, and is a Nazi-defending racist, is the person Ivanka has chosen to get her morals from.

The entire Republican Party has shed all morals, ethics, and integrity to support Donald Trump. Granted, people like Mitch McConnell never had any to start with, but people like the pious Christian Mike Pence (who’s traded in his Christian beliefs to be chief sycophant to the pornstar president), to Lindsey Graham (who once called Trump a racist), to Paul Ryan (who also called Trump a racist) used to be people who used to carry at least a little dignity and respect for themselves. In pretending Donald Trump is something he’s not, these Republicans have sold their souls to worship in a cult…a very stupid, hateful cult.

Anyone who says they got their morals from Donald Trump does not understand morals. Ivanka and her two idiot brothers probably confuse morals with molars. Ivanka talks about morals while her husband is conducting secret chats with Saudi royals that benefits his family’s businesses and affects U.S. foreign policy. Ivanka has demonstrated her own morals by criticizing an accused pedophile then shutting up after her daddy endorsed him. She’s displayed her morals by claiming she’s in the White House to advance women issues while staying silent about sexual assault accusations against Brett Kavanaugh and her own father.

One thing the Trump family has proven is that billionaires can’t buy morals any more than they can buy Greenland.

It’s that “moral compass,” that’s landed the Barbie Princess in some corrupt neighborhoods. But, honestly…she likes those neighborhoods. She was born in it, raised in it, and married into it. She followed it all the way to Washington to participate in the family corruption and to look pretty in the windows of Buckingham Palace. Corruption is all Ivanka knows.

Ivanka needs to realize that she can’t inherit her father’s moral compass when he’s never had one.