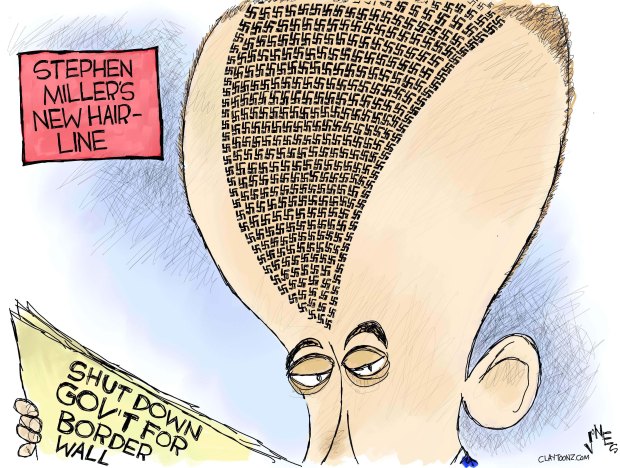 I did Nazi that coming. White House hate czar Stephen Miller popped into Face the Nation on Sunday to bloviate about the dangers of immigrants while sporting something on his head that looked like a recalled Chia Pet. Miller should stop taking hair advice from the president and raiding his Adderall.

Miller spent the bulk of his time on CBS promising that Trump would shut down the government if he doesn’t get funding for his racist, xenophobic border wall while pretending that stuff on his head came from his scalp and not a can.

Miller argued that refusing to fund the border wall was the same thing as advocating for illegal immigration and said, “Democrats have a simple choice between fighting for America’s working class and promoting illegal immigration.” I’d argue that milking $5 billion out of the budget for a useless wall that can be defeated by ladders does more harm to America’s working class than immigrants. Miller would probably enjoy kicking over cartons of water left by humanitarians for immigrants, except the desert sun would melt his faux follicles.

What makes less sense than Miller’s new hairline is threatening to shut down the government and having those guarding the border going unpaid. Can we stop the dogmatic lie that those against the wall are in favor of an unprotected border?

The wall is a ridiculous argument but it’s loved by those who love simple solutions and talking points. “Build the wall” is a fun chant for sycophants who form their opinions from internet memes. There’s no thinking required.

The wall is impossible. We can’t build a wall to cover our entire border when it would have to go over private property, mountains, and rivers. If we can’t protect our entire border then how are we going to protect the entire wall from people going over or under it? We’re talking about something that will cost between $20 to $70 billion dollars that can be conquered by Mexican ladders.

On top of all that, the wall is hateful. If the wall is ever actually constructed, it will be a dark spot on our nation’s history alongside slavery and the internment of Japanese Americans. If the wall is built, someday a more enlightened United States will tear it down.

But the wall will never be built. Stephen Miller has a better chance of needing a comb before that wall’s ever constructed.