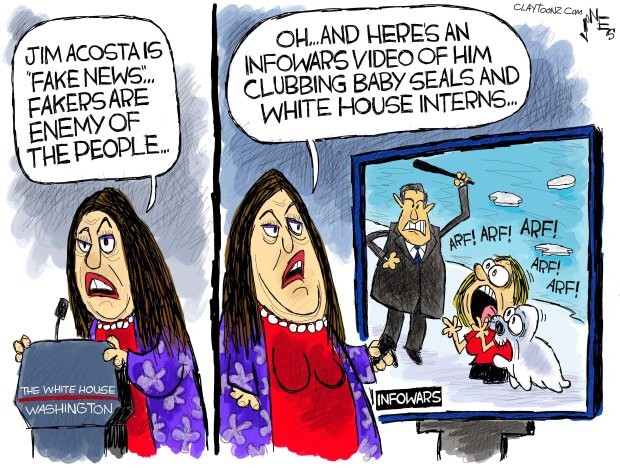 If you’re a Donald Trump supporter, you don’t have any credibility on any political or social issue. Being a Trump supporter is like a snake eating its own tail. How so? I’ll explain.

The Trump reasoning is; if you’re dishonest and lying to the American people, then you’re their enemy. Nobody lies more to the American people than Donald Trump. That’s not hyperbole. He employs people to lie to the American people. Sarah Huckabee Sanders sent out a manipulated video from Infowars. Kellyanne Conway calls Trump lies “alternative facts.” Rudy Giuliani says, “Truth isn’t truth.” So, if you buy Trump’s argument that people who lie to us are the enemy, then Trump is the enemy.

So, you either have to believe that Donald Trump never lies, which is like defying gravity, or you believe his argument on fake news…at any rate, you’re that snake eating its tail. You are eating your own ass.

You can’t be one of those Trump people who say “I wish he didn’t tweet so much, but I like what’s done with the economy.” Bull shit. That just proves you’re a liar too. This is Obama’s economy, which he created out of the recession the last Republican president made. You can’t argue, “but Hillary’s dishonest.” Nope. Again, you’re a liar. You can’t argue about her server because Trump is doing the same thing. You can’t argue about the Clinton Foundation because Trump engages in “pay for play” and he literally steals from charity. And, if you start with “I like what he’s done for the military” or “he’s making us respectable again,” someone should slap you in the lying mouth.

You have no credibility. You’re a liar. You’re definitely not someone to be in business with, because you’re a liar and dishonest, and you’re probably a very shitty friend. The only people you can hang out with and talk to are other shitheads. You suck. You ate your own ass.

This is especially egregious if you’re in the news business. Facts are supposed to be important to you. Not just Trump’s talking points. You can’t say Jim Acosta and CNN are “fake news” without telling us why they’re fake news. Can you point out the lies they’re telling or is all you got is the cry of “fake news?” The truth should be important to all of us. Unfortunately, half the nation doesn’t care.

At some point, you have to bring reason back into your life. When he tells you he didn’t know someone but it’s later revealed his penis was inside her, you have to accept he’s lying. If you don’t leave now, he’s going to start beating you and you’re going to hang in there hoping he’ll change or claim it was your fault for making him angry. You shouldn’t have left a wet towel on the floor.

But, then again. If you’re a Trump supporter, you probably didn’t understand any this. Facts, irony, subtlety, hypocrisy, analogies, and metaphors to you are like math is to me. You put the what where? I have a calculator, but what’s going to help you when you refuse to use the calculator (that metaphor is; stop reading Infowars and listening to Trump and start watching CNN).