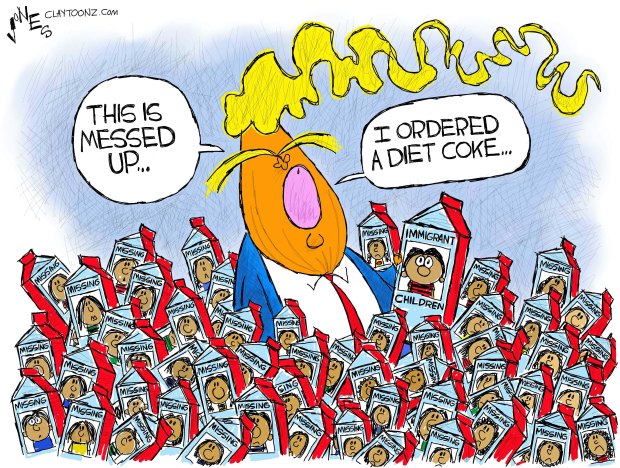 The United States government has been separating immigrant children from their parents in Trump’s New World Order of Chaos and Uncaring. Just in case that’s not heartless enough, they’ve also lost track of nearly 1,500 children who crossed the border alone (that is, unaccompanied by adults).

Christian conservatives are outraged. They’re demanding answers, justice, compassion, and they’re about to storm the White House and Congress until this situation is explained and rectified.

The Department of Health and Human Services place unaccompanied minors with sponsors and from there; they throw their arms in the air and say, “not our problem anymore.”

From The Washington Post, “From October to December 2017, HHS called 7,635 children the agency had placed with sponsors, and found 6,075 of the children were still living with their sponsors, 28 had run away, five had been deported and 52 were living with someone else. The rest was missing.” HHS argues that they’re not their responsibility after being placed with sponsors.”

It’s not just about legal responsibility, but humanity and compassion. Senator Rob Portman of Ohio pointed out those federal officials handed eight children over to human traffickers who put them to work on an egg farm in Ohio. If immigrant children could actually lay eggs, there’d probably be a lot more handed over for trafficking.

Earlier in the month, Attorney General Jeff Sessions said the Justice Department will begin prosecuting everyone who crosses the southern border illegally, even if they’re seeking asylum. So, if you’re entering the United States illegally, take my advice and do it on an airplane and do it while being white. Most people who enter this nation illegally don’t enter through our border with Mexico. Most enter legally, through the air, and overstay their visas.

Other facts: Only about three percent of immigrants here illegally have been convicted of felonies or serious misdemeanors. Most have been here over a decade. More than 30% own homes. They don’t collect welfare. They pay taxes. The majority of people here who have overstayed their visas are from Canada.

Trump’s daughter and adviser (which is a ridiculous sentence I have to write), Ivanka, posted a pic on social media snuggling her son. Awwww. Critics quickly criticized her attempt at posing as the perfect family while there are children being ripped apart from their parents. But, in Ivanka’s defense, she’s rich and white. Plus, if it makes you feel better, in her pursuit of children issues, she was just awarded several new trademarks in China where little tiny fingers will now be making her designer handbags. I knew you’d feel better.

The new normal is being heartless, uncompassionate, uncaring, and just not giving a rat’s ass unless it’s you or one of your rich cohorts. And if you’re a middle-class or poor white person who is really enjoying the treatment of people with a darker skin tone than yours, don’t celebrate too much. Because Trump doesn’t really care about you either.

Thank you for your support. Reader contributions, small and large, really do help and are appreciated in a time of dwindling revenue for political cartoonists. You will also be supporting free speech and the First Amendment, and independent journalism while those in power are doing all they can to suppress it. You can also support by purchasing a signed print for $40.00. Just look at the right of this page and click the PayPal button, or you can email and make other arrangements. Thank you!