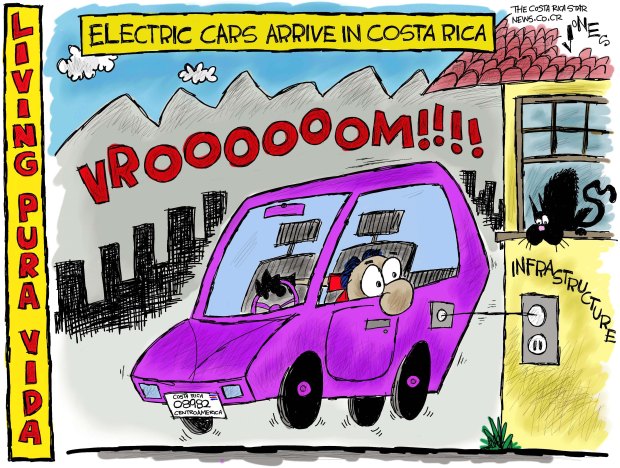 Here is last week’s cartoon for The Costa Rica Star. Electric cars are coming to Costa Rica. The Central-American nation is one of the world’s friendliest to the environment, so it’s no surprise they want more electric cars on their streets. There are fewer than 100 electrics on the streets now, but they say that more than half of the nation’s cars will be electric in ten years.

How serious is the nation? They’ve set up a station where consumers can charge their cars for free. The first is a prototype and out of the way for most people, but it presents how serious they are. Eventually, these stations will be hotels, airports, resorts, etc.

I’m kinda enticed by the idea of a car that doesn’t use gas, never needs an oil change because there’s no oil, no radiator, muffler, or the problems with emissions.

Creative note: I took yesterday off, watched the newest Pirates of the Caribbean movie and “The Big Sick,” and ate ice cream. New cartoon coming Monday morning. I go through withdrawal too.