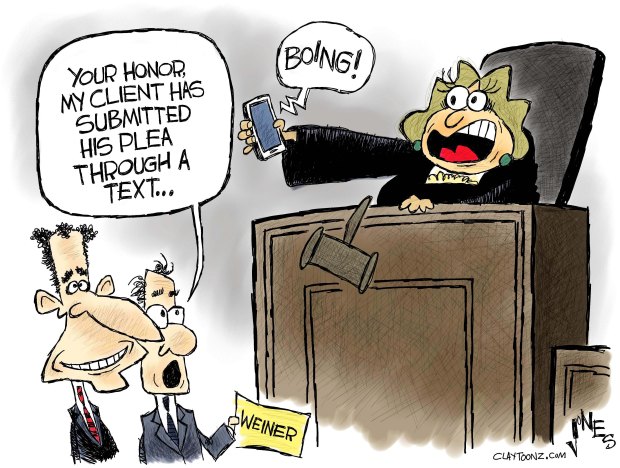 I don’t care if two consenting adults text pictures of their private parts to each other. It’s probably not a good idea if you’re married unless you’re sending photos of your junk to your wife, which will probably bore her. I also believe you have the right to share these sort of photos with people who want to receive them, though the trappings of society are really discouraging it as they can show up all over the internet, even if you’re not famous. It takes a real low-life scum of a person to hack and spread nude photos of celebrities on the internet that were intended to remain private. It’s just as terrible to distribute pics of your ex on a crummy website. These sort of shares have ruined lives, literally.

One big no-no, and it’s even illegal (like some of the examples above), is to send dirty photos back and forth with a minor if you’re an adult, like Anthony Weiner.

The former U.S. representative from New York City had a very promising political career. He brought it down by sexting. He accidentally tweeted a pic of his junk that was intended for a text. Not content with ruining his Congressional career, he did it again and ruined any chance he had of becoming mayor of NYC. Then he did it again. I’ve lost count how many times he was busted sending pictures of stuff to women. And then he sent them to a minor.

Weiner’s wife, Huma Abedin, couldn’t tolerate his behavior, and the embarrassment, and finally divorced him. Anthony even had a “hand” in taking down the presidential campaign of Hillary Clinton, as the FBI was investigating his sexting with a minor when they found unrelated documents from Hillary Clinton on his computer. James Comey, the then-director of the FBI, told the public they were re-opening the case into Clinton’s server days before the election. Of course none of the Clinton documents turned up any evidence against her. Weiner’s wiener very well may have destroyed our nation. A dick literally put Donald Trump into the White House.

Last Friday Weiner pleaded guilty in court to committing a felony. He cried while he admitted that he knew was “as morally wrong as it was unlawful.” What was morally wrong, and unlawful, was his sexting a 15-year-old girl in North Carolina. Weiner is 52.

Weiner will have to register as a sex offender where he works and lives and he may face prison time. Transferring obscene material to a minor carries a sentence of up to 10 years in prison. That’s a place where a lot of people may be willing to see Mr. Weiner’s wiener. He’ll probably get to see a lot of theirs too though he may not see them coming if he drops the soap.

During his plea, Weiner said, “I’ve compulsively sought attention from women who contacted me on social media, and I engaged with many of them in both sexual and nonsexual conversation.” He also told the judge “I accept full responsibility for my conduct,” and “I have a sickness, but I do not have an excuse.”

I read a few posts on social media from conservatives upset with him saying he has a sickness. The only description they want to give Weiner is that he’s a pervert.

I don’t have a problem with describing him as a “pervert,” but I do believe he does have a sickness. Here’s a man with a promising career, a beautiful and intelligent wife, a child, and after being caught he’s given more than one opportunity to stop his behavior. He didn’t even change his methods. He kept doing it. That is a sickness.

It is similar to one addicted to drugs or alcohol being fully aware they’re killing themselves but they can’t stop. He does need treatment and I hope he gets it. Of course, I’m a bleeding-heart liberal and I have empathy for others, so what do I know?

Creative notes: When I was doing my four-cartoon marathon Friday I made posts about it on social media. I got a lot of comments from readers about how Trump was keeping me busy, though not a single one of those cartoons was on him. I took yesterday off and went to bed at a normal hour last night (which is weird for me) and started working kinda early today. It was nice to continue to subjects that aren’t Donald Trump.

Believe it or not, I get bored with Trump. I was hitting a wall last week. I’d be real happy going a week with silence from him though I don’t think that’s ever going to happen as long as he’s president.