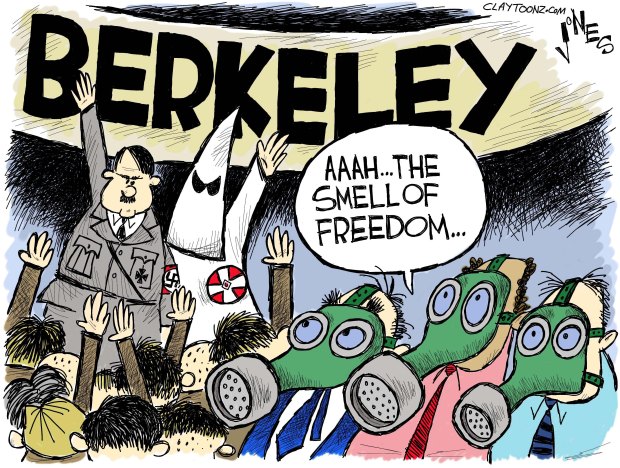 Many people say you lose a political argument when you make a comparison to Hitler or Nazis. The exception to this is when you’re talking about actual Nazis. You are allowed to compare fascists with fascists.

And I know it’s not entirely fair to compare people like Donald Trump to Adolph Hitler. For comparison’s sake, Hitler actually wrote his own book without a ghostwriter.

When it comes to Trump and his Trumpanzees I don’t want to go overboard with the comparisons to Hitler, Mussolini, Stalin, Nixon, Palpatine, Klansmen, Dr. Evil, Sergeant Schultz,  Oompa Loompas, etc.

The First Amendment guarantees our freedom of speech. Hell, I make my living from it. I believe that even horrible and atrocious viewpoints have the same rights I do. You have to allow the Westboro crazies to assemble and wave signs reading “God hates fags,” but you don’t have to let them in your house.

So while universities like Berkeley are bastions for opposing viewpoints their students and the public have the freedom to say they don’t want to provide the platform for a speaker with racist ideas.

Milo Yiannopoulos is an editor for Breitbart and he is a racist and a bully. He’s started a scholarship program open only to white male students (because white guys never get breaks). He received a lifetime ban from Twitter for bullying actress Leslie Jones for her role in the Ghostbusters remake. There were a lot of reasons not to like that movie other than a black chick being in it. Seeing that this guy is a racist troglodyte and expresses horrible views, why would you want him in your house? Have you ever tried to Scotchgard an entire university?

When Milo speaks at a campus he brings white supremacists. The white supremacists bring recruiters. They encourage and promote horrible ideas to be inflicted upon minorities. I can understand why people may not want that element hanging around funking up the place.

Students protested. Then a bunch of bad people showed up in masks and started to trash businesses and started fires. If there’s any further proof that these vandals weren’t part of the liberal protesters, they trashed a Starbucks. Liberals would never trash a coffee house. Especially one that financially supports liberal causes and that conservatives are currently boycotting. So while it’s safe to drink a mocha in an environment without someone dropping an N-bomb, a flaming garbage can may come flying through the window.

UC Berkeley eventually cancelled Milo’s speech out of safety concerns, but he still led a rally on the campus for his racist supporters.

Conservatives love to tout how liberals prevent them from expressing their ideas. Really? You want to tag yourself with the racist ideas of Yiannopoulos and claim that’s standard conservatism? You want to claim him as one of you? OK then. He’s one of you guys. You can have him.

By the way, while you’re complaining about violence at liberal protests you’re conveniently forgetting there have been 172 documented hate crimes on college campuses since Donald Trump’s election.