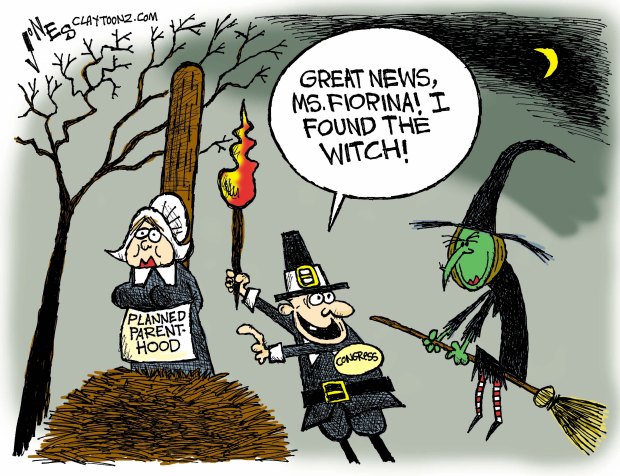 I don’t really like to depict women as witches. But what else am I supposed to do when there’s a witch hunt? Besides, conservatives love to depict Hillary Clinton as a witch so let them enjoy these apples.

The anti abortion group, the Center for Medical Progress (HA!) is connected to Operation Rescue which is affiliated with people who have committed violence against doctors and abortion clinics. You know, affiliated with terrorists. Yet, Republicans want to follow their lead.

The videos are fake.

Carly Fiorina is a liar.

At Tuesday’s Congressional hearing, the republicans even had to pull out graphs with bogus information supplied by an anti-abortion group (and claimed they got it from Planned Parenthood’s books).

Now tell me, who really needs to be investigated?

If you’re going to shut the government down can you at least do it over something factual? It doesn’t matter how many times a Republicans says it’s true (they’re chopping up babies, selling body parts, breaking the law), it doesn’t make it true.