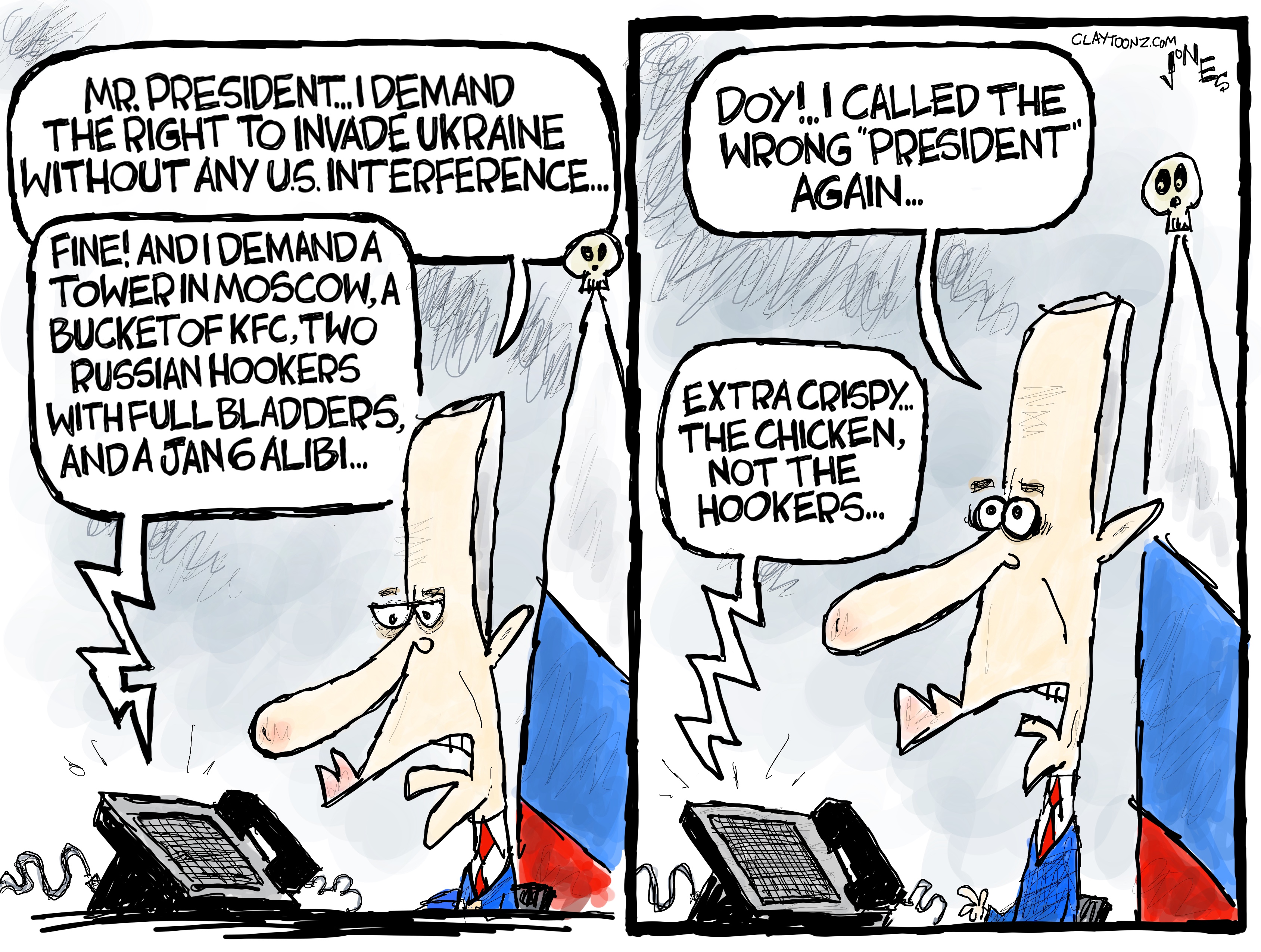 Russian President Vladimir Putin requested a phone call with President Joe Biden, which was held yesterday. This was the second time the two presidents talked to each other in December. So, what’d Putin want? Putin wants Ukraine and for the U.S. to stay out of the way and not hit Russia with sanctions.

Putin may not physically take Ukraine, but he wants the nation under his influence. In the past, Ukraine had a president who was a Putin puppet, Victor Yanukovych. That’s the guy Trump’s 2016 campaign manager, Paul Manafort, worked for (who was later indicted by the Justice Department and later pardoned by Trump). Yanukovych was ousted in a revolution in 2014. the next month, Russia invaded and annexed Crimea. Today, Yanukovych is in exile in Russia while Ukraine’s new president is anti-Russia, pro-democratic, and a friend to the west. We give military aid to Ukraine which Trump used to extort the democratically-elected president of Ukraine, Volodymyr Zelinsky, to help him in his election against Joe Biden. Trump’s first impeachment was over this extortion attempt.

Putin wants the United States and NATO to ignore Ukraine. Putin has not requested but demanded security agreements that include a guarantee Ukraine will never be accepted as a member of NATO and eastward expansion by the alliance stop. Of course, Biden won’t accept any of this because he’s not a corrupt Putin puppet like the last guy.

Putin warned Biden during the call that any new sanctions against Russia over the Ukraine crisis could lead to “a complete rupture of relations” between Moscow and Washington that their descendants would come to regret.

Is this one of childhood threats like, “I’ll slap you so hard, your grandkids will feel it?”

An aide to Putin said the Russian president told Biden that sanctions would be a mistake, “which our descendants will later appreciate as a huge one” and, “Many such mistakes have already been made over the past 30 years. Therefore, it is advisable not to make such mistakes in this situation.”

Putin has already amassed around 175,000 troops on the Russian border with Ukraine and last week, he test-fired hypersonic missiles. While we don’t want to send U.S. troops to fight in Ukraine, Putin really doesn’t want a fight with America’s military.

Part of the deal with being a part of NATO is that the rest of NATO defends you from all attacks. This is the main reason Putin doesn’t want Ukraine to be a part of NATO as he likes having the option of invading it someday.

During Trump’s run for the presidency in 2016, he praised Putin and compared him favorably over President Obama. He defended Putin’s murdering of his critics. Trump said Putin was “smart” to invade Crimea. During the campaign, Russians were invited to Trump Tower to dish dirt on Hillary Clinton. Trump would read Wikileaks’ published Russian hacks of the Clinton campaign to his racist rally-goers. As president-elect, Trump’s idiot son-in-law, Jared Kushner, tried to establish a backchannel for communications with Russia. Jared flunked his application for a security clearance three times for lying about his contacts with Russia (Trump, as president (sic), eventually overruled the FBI and gave Jared his little clearance). Trump’s national security adviser, Michael Flynn, told Russia (in secret talks he later lied about that forced him out of office within a month and later got him indicted for lying to the FBI) not to retaliate to Obama’s sanctions for their election meddling, as they’d reverse them as soon as they assumed office.

Shortly after entering office, Trump hosted Russia’s ambassador to the U.S. in the Oval Office, prevented the U.S. press from attending, and allowed Russia’s press to record the meeting. During this meeting, Trump told the Russians he had solved the American investigation into their meddling and his collusion by firing FBI Director Jim Comey after he refused to give Trump his loyalty, stop the investigation of Michael Flynn, and issue a public statement that the Moscow pee-pee incident never happened. Trump always argued he would never have to resort to paying Russian hookers to pee on him because there are plenty of people who’d pee on him for free.

During another world summit, Trump had an impromptu chat with Putin using only the Russian translator, with no other American official around.

During the 2016 presidential campaign, Donald Trump was actively trying to secure a deal to build a Trump Tower in Moscow. According to reports, Donald Trump promised to give Putin the penthouse in the tower. If this is true, it was a bribe. Bribing a foreign official is illegal in the United States.

After Putin rewrote history and claimed the Soviet Union invaded Afghanistan in 1979 only because Afghanistan invaded them first, Donald Trump repeated the lie.

While in office, Trump questioned the need for NATO while constantly criticizing it. During the 2016 campaign, he spoke of the U.S. withdrawing from the alliance. According to The New York Times, in 2019, he talked privately about leaving NATO if he was reelected. There was also talk of pulling all U.S. troops out of South Korea clearing a path for Kim Jong Un to take the entire Korean peninsula.

Trump loves him some fascists. Putin is basically president for life in Russia, or at least for as long as he wants. Democracy in that nation is a ruse as Putin has a habit of imprisoning, or poisoning, or both, his political opponents. Donald Trump wants to be America’s Putin and be president for life. In case you don’t recall, Donald Trump attempted to murder Joe Biden by giving him covid during their first debate. This explains the format requested by the Trump Campaign where the candidates got to lick each others’ faces.

Donald Trump has argued he should have three presidential terms. He’s praised China’s President Xi Jinping for being president for life. He defended Turkey’s President Recep Erdogan for being president for life. And you can believe Putin also wants Trump to be “president” of the U.S. again. While Trump was in office, he was Putin’s American Yanukovych. After Putin won a sham reelection, and Trump was advised not to congratulate Putin on winning a sham election, Trump called Putin and congratulated him on winning a sham election.

What I wonder is, do they still talk? Is there a plan for another Trump insurrection? Is Trump seeking Russian assistance, either financially or from another social media gaslighting campaign? White nationalists Trump supporters love Vladimir Putin and Russia. They also love fascism.

I’m glad Joe Biden is president because he’s a Democrat. President Obama didn’t buy Putin’s bullshit either. But Putin is good at duping Republicans. George W. Bush said he looked into Putin’s eyes and saw his soul when he doesn’t have a soul.

But looking into Putin’s eyes is a lot better than what Donald Trump did, which was crawling up Vladimir Putin’s ass.

Music note: Today, I jammed to Nirvana while creators this cartoon. Specifically, I listened to the albums Bleach and Incesticide.