Obviously, this was drawn before the verdict. I kinda wish I had drawn it. I did draw a cartoon of Kyle crying on the witness stand, but it didn’t have a comparison to Brett Kavanaugh or crocodile tears. Those were two things I knew other cartoonists were going to do.

This was for the CNN newsletter. I had actually done a cartoon about six months ago with Republicans burning Liz Cheney at the stake with one of them against it saying, “Have you seen today’s gas prices?” I forgot about that and my proofer Laura found it. I’m not worried about it but if I had remembered, I probably wouldn’t have done this cartoon. Remember a cartoon six months ago? I can’t even what I ate this morning.

I didn’t go with this cartoon but I like the point in it. The last time we had extremely high gas prices was in 2008 during Bush’s last year. I remember the economy being so bad that there were a lot of things to blame Bush for. Gas prices will go down again, and President Biden won’t have much to do with it. Gas prices aren’t partisan. They hit presidents of both parties…and every leader worldwide. 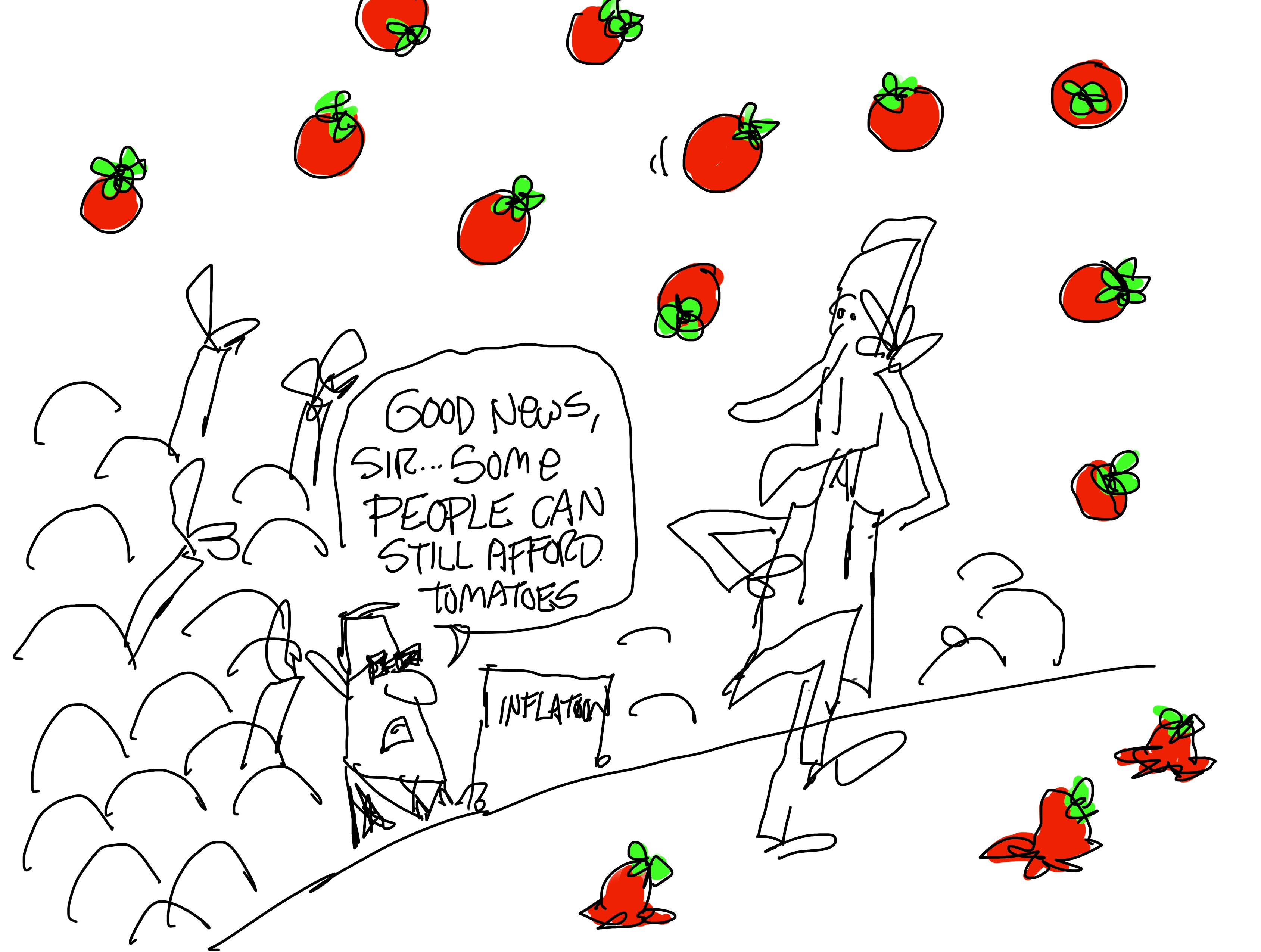 This one became a real cartoon. I wanted to do something about inflation. Anytime I draw a cartoon somewhat critical of Biden, it doesn’t do well on social media. At least not with my audience. And the right always forgets I did it, claiming I need to hit a Democrat while never excoriating a conservative cartoonist to hit Trump. And in this cartoon, I’m not blaming President Biden for inflation. I’m just having fun with the current situation because him being blamed is the truth…even though the blame isn’t based on the truth. 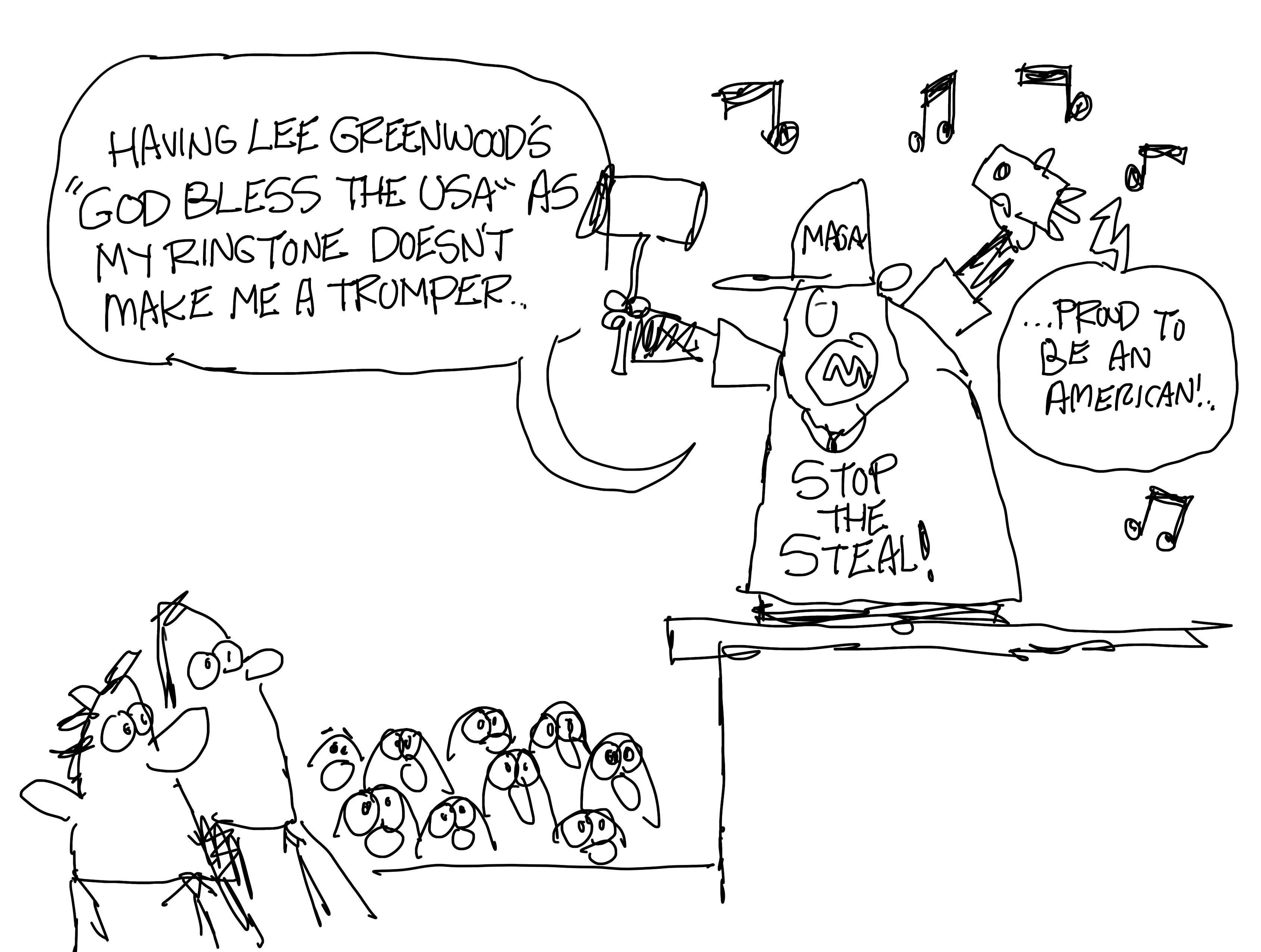 The only thing wrong with this cartoon, other than it’s not really good, is that only the hyper-partisan are aware the Asian-joke-cracking racist judge of the Rittenhouse trial has Lee Greenwood’s god-awful “God Bless the USA” song as his ringtone. The song was used at every Trump Rally since Trump rallies began. And why did the judge even take his phone inside the courtroom? He wants everyone else to respect the process but Judge Jackass gets to bring his phone into the room? Is he playing Pokemon Go on it, or was he just virtue signaling?

Was the judge telling us he loves Trump or just loves crap music? I should write a song about America, freedom, bald eagles, Chevy trucks, baseball, and apple pie, and if anyone doesn’t like it, say they hate America.

I didn’t like this one so much. Also, it had a short shelf life. However, I really do want to draw a pelican. Keep your eyes open for that.

I felt I had neglected the infrastructure (like Trump did for four years), so I knew I needed something on it. I thought this was good enough. I like making points that Republicans won’t get. I also like drawing cartoons the Lets-Go-Brandon crowd won’t understand.

This one started out with just Climate Change and Critical Race Theory. Then I knew I needed to include the fictional War on Christmas. This one became a real cartoon.

Tell me what your favorites are.