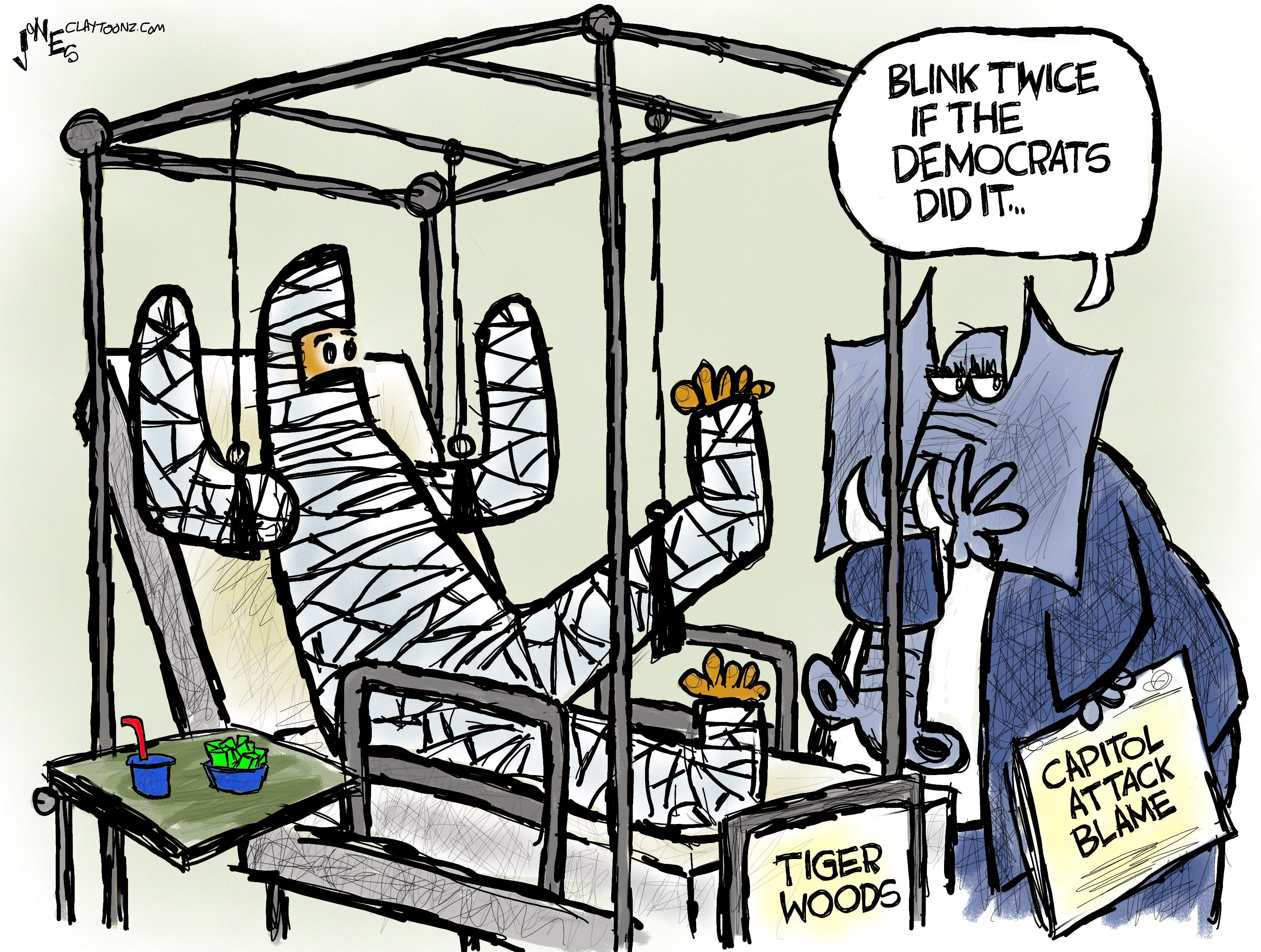 The attack on the United States Capitol building was instigated by months of a Big Lie that Donald Trump won the election and it was stolen from him. It was largely built around right-wing terrorists who coordinated with each other how to seize the Capitol. Before the event, Donald Trump called these supporters to be in Washington, D.C. on January 6. Senators Josh Hawley, Ron Johnson, Ted Cruz, and several others helped push the Big Lie. The day of the attack, when Congress was certifying the election which is a task mandated by the United States Constitution, Josh Hawley gave the terrorists a big wave of his fist which was either a show of support or to show he wanted to whack them off. Either way, he wanted to pleasure terrorists.

Ted Cruz, along with Hawley, did all they could to slow down the certification process, using the Big Lie in doing so. Now that they told that Big Lie, they’re on to new ones…like blame Democrats for the terrorist attack.

During the attack, why was there a delay in a response from the National Guard? We still don’t have an answer to this. It was ridiculous that the response was so slow, but we have one fact. Donald Trump didn’t rush to get the National Guard on the scene. He was too busy calling senators and House Minority Leader Kevin McCarthy planning how to stop the certification of the election. Another fact: This was a coup attempt. We did NOT have a peaceful transfer of power between administrations. Donald Trump still has not conceded he lost despite the fact…let me clear my throat…HE FUCKING LOST!!!

“Would you agree that this attack involved White supremacists and extremist groups?” That’s the question asked by Senator Amy Klobuchar. All four witnesses said, “Yes.” Senator Ron Johnson tried to downplay the white supremacist angle. Why, why, why the fuck why is anyone who is not a racist trying to protect white supremacists? Ron Johnson didn’t just try to protect white supremacists, he used conspiracy theories during a Congressional hearing. He claimed the Trump supporters were in a “festive” atmosphere and that there were too many of them who were fat, bloated, handicapped, old, decrepit, and just too out of shape to be involved in a terrorist attack. Plus, they’re all patriots who love Trump and their country. The attack was by people disguised as Trump supporters. In fact, the fake Trump supporters planned the entire thing. Why didn’t Ron Johnson use the “they’re too stupid to plan this” defense? That has a bit of logic to it.

Monday, Fox News’ host and Pinocchio understudy Tucker Carlson claimed on his show that white supremacists had nothing to do with the attack. I guess they were all home picking roses or something. Maybe they were praying and building churches. Tucker Carlson is a liar and he’s lying to protect racists. Why, Tucker, why? Why must Tucker be a fucker?

Josh Hawley, the guy who might want to stroke off white nationalist terrorists, said that Speaker Pelosi’s choice to investigate the matter (not him masturbating terrorists, but the entire attack), Retired Lt. Gen. Russel Honoré, shouldn’t be involved in the investigation for asking if some Capitol Police officers were complicit in the attack. Hawley said, “This person has no business leading any security review related to events of January 6.” Really? Hawley has no business investigating the attack, sitting on a hearing, or even being a United States Senator. Aren’t there some white supremacist terrorists back in Missouri who need a reach-around?

Hawley, who helped an insurrection and was the first Senator to become a coup’s cheerleader, said that Honoré’s comments were “disrespectful” and “really quite shocking”.

There are 2,000 officers in the Capitol Police and most fought the terrorists, but there were a few who opened the doors and took selfies with them, which is almost as bad as Representative Lauren Boebert tweeting out leaders’ locations during the attack and a Senator wanting to jack off insurrectionists.

During the opening statements of the hearing, Ted Cruz was busy scrolling through his phone, probably searching through CancunCruz hashtags. Sorry, Ted. That shit has a longer shelf life than #BernieMittens, you treasonous constituent-abandoning poodle-neglecting sack of shit.

Ted Cruz pretending he cares about white supremacists trying to overthrow our government and disenfranchise our presidential election is about as believable as Ted Cruz being concerned about Texans, or his poodle, freezing while he was taking his daughters to Cancun. By the way, what is there for children to do in Cancun? For the record, I’m against doing body shots with nine-year-olds.

Ted Cruz was all, “Oh it was terrible…how can we make sure it never happens again?” Answer: Get rid of Senators who help incite terrorists. At this point, even Cruz’s poodle wants a new daddy.

Ted Cruz, Ron Johnson, and Josh Hawley should be stripped of their committee assignments just like House Qnut Marjorie Taylor Greene. They could all use that time to fundraise for their racist PACs…or go to Cancun. Members of Congress have no business sitting on a committee asking about terrorists attacks they enabled. They should be the ones answering questions. Missouri and Texas, I’m not so sure about, but Wisconsin, I know you can do better and you get your shot next year.

As for Tiger Woods, I was really sorry to hear about his car wreck yesterday and I was worried about him. But it sounds like we have good news this morning. Tiger, stop driving fast and stop palling around with Donald Trump. Tiger allowed Donald Trump to use him for a photo-op when Trump awarded him the Presidential Medal of Freedom. Tiger, when it comes to Trump medals, you’re in the same company as Rush Limbaugh. Not good. Karma is mean. Don’t accept medals from people who incite white supremacist terrorist attacks.

Notes on my book, Tales From The Trumpster Fire: I have NINE copies of my book in stock, which I’m selling for $45.00 each, signed. Also, I have copies of my first book from 1997, Knee-Deep in Mississippi available for $20.00.