Last week for CNN, I was focused on White House chief-of-staff Mick Mulvaney’s quid pro quo confession. Here the roughs from that session with my editors.

This is the one we went with. My editor for the week (it rotates), Jane, suggested I throw in “get over it” to the text in the second panel which was a very good idea. This cartoon turned out to be very popular.

I always throw in something on a different subject. This one was awesome in my head and didn’t work at all on paper. I don’t think I even sent it to my editors.

I don’t think I sent this one either. I got the idea after we had decided to go with a Rudy cartoon so I drew this for my newspaper clients. The next morning, I was told they had changed their minds and I had to think of something else. I think if I had shown CNN this one, they would have chosen it. 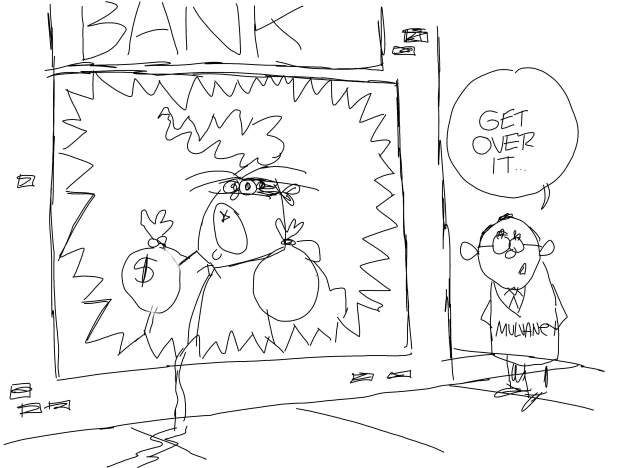 I thought this was just kinda OK.

My editor liked this one and approved it. Then, I suggested a different way to do it.

This was it. My editor liked it and said we’d go with it. I told her that I could change “Kool-Aid” for “turf,” as most people may not be familiar with that pop-culture reference. She said she was glad I was “bringing it back.” I told her if I was using it, then it’s probably not coming back. Ultimately though, they decided we had done enough with Rudy and wanted something else. I really didn’t know what I was going to do and was at the point where I thought I would never have another decent idea ever again…and then I thought of the idea at the top of this blog. I was happy with it.

Let me know which idea is your favorite. Did we pick the right one?