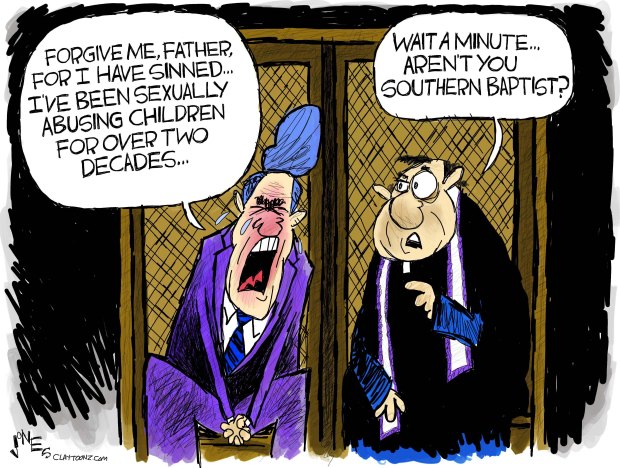 Since 1998, about 380 Southern Baptist leaders and volunteers have been accused of sexual misconduct, according to a massive investigation by two Texas newspapers.

The Houston Chronicle and San Antonio Express News discovered that over 700 victims have been abused, with many encouraged to seek abortion and forgive their abusers. So, when a church tells someone to get an abortion, does the church then tell them to ask God for forgiveness for the abortion? I’m not sure how this works with religious hypocrisy.

This isn’t just a Texas thing as the newspapers researched federal and state court databases, prison records and official documents from more than 20 states and by searching sex offender registries nationwide.

The newspapers found 380 credibly accused officials in Southern Baptist churches, including pastors, deacons, Sunday school teachers and volunteers. they verified that about 220 had been convicted of sex crimes or received deferred prosecutions in plea deals. Of those 220, 90 remain in prison and 100 are registered sex offenders.

Over the past two decades or so, the Catholic Church has been embroiled in controversy over widespread sexual abuse of its members, especially children.

In 2014, The SBC passed a non-binding resolution on child sexual abuse. It said, “We remind all Southern Baptists of their legal and moral responsibility to report any accusations of child abuse to authorities in addition to implementing any appropriate church discipline or internal restoration processes. We likewise call upon all Southern Baptists to cooperate fully with law enforcement officials in exposing and bringing to justice all perpetrators, sexual or otherwise, who criminally harm children placed in our trust.”

For years, people have blamed the abuse in the Catholic Church on the policy of celibate priests. Southern Baptists don’t have that excuse as their leaders are often married with families.

I was mostly raised as a Southern Baptist. I never felt comfortable with any religion but especially theirs. I always found it hypocritical. Southern Baptists need to clean up their own house before passing judgement on mine or anyone else’s.