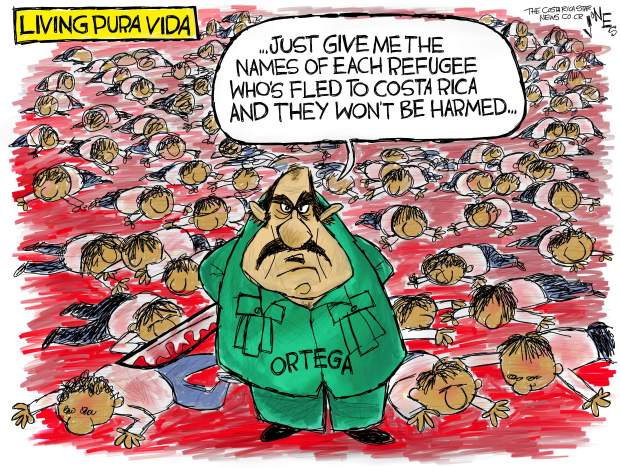 What is it with strongman-type leaders, dictators, and dictator wannabes that they feel they can force their will on people who don’t have to bend to their demands?

Daniel Ortega, the president of Nicaragua whose wife is vice president, is demanding Costa Rica to supply him with the names of each of the over 20,000 Nicaraguan refugees currently in that nation. He wants “a list of people seeking asylum,” to point out who committed crimes during protests and should face justice.

Ortega promises they won’t be harmed, and he’s only looking for the lawbreakers. Yeah, sure. You really don’t want someone of the likes of Ortega to define lawbreaking.

During his press conference with Donald Trump in Helsinki, Russia’s Vladimir Putin told members of the American press not to “disregard these issues and don’t think about this anymore again,” when asked if he had anything on to hold over Trump. The U.S. press doesn’t take orders from U.S. politicians, less enough one from Russia.

Donald Trump is demanding that The New York Times provide him with the name of the anonymous writer of the op-ed from his staff, accusing him of being incompetent. He’s floating the idea of the Justice Department going after the free press to find out sources, without identifying any laws that were broken other than it was “treason” to criticize him.

Ortega, Putin, Erdogan, and Trump aren’t interested in what’s best for their people, only their self-interest. The world would be a better place without any of them.

The U.S. will not be turning over any clerics to Turkey, the American press isn’t going to take journalism advice from Putin, and The New York Times will never give names to Trump (not sure about the Justice Department thing). And, Costa Rica is not going to any names to Ortega. That would go against international law.

When authoritarians start asking for names, that’s when they need to be told to sit and spin.