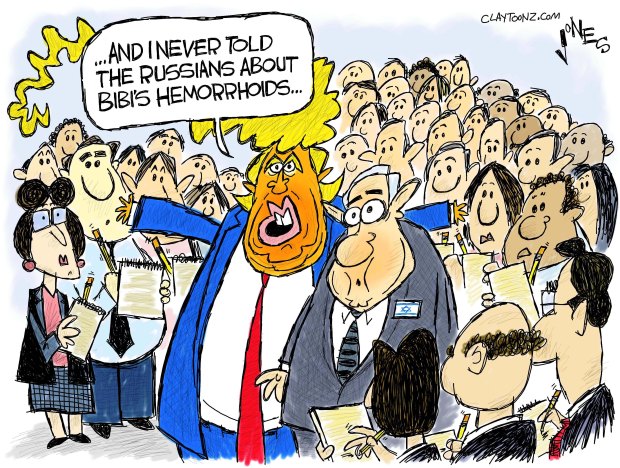 I want to play poker with Donald Trump. The man does not have a poker face. He has a Cheeto face, but not a poker face. If you ask him if he wants to call your raise he’d tell you that he doesn’t have a full house.

There’s been a lot of talk in the news how Russian spies can hoodwink Americans to become moles without their ever knowing it. I would be very skeptical of that if we weren’t talking about the sort of people Trump hires, and even Trump himself (who has hired a lawyer to defend him from impeachment and charges of colluding with Russians…who has worked for Russians). Have you seen an interview with Carter Page? That guy couldn’t pick a number between one and three. The Russian spies even described Page as an idiot while they were attempting to recruit him, which is what made him a juicy target.

When news broke that Trump gave highly classified information to the Russians there was speculation that the intel was provided to the United States from Israel. There was concern the Russians could figure that out, and even who the agents are gathering the intelligence. It was never reported that Trump told them it came from Israel.

So naturally while in Israel Trump told the entire world that the intel came from the Israelis. He wasn’t even asked when he told the press that he never mentioned Israel to the Russians. Israeli prime minister Benjamin “Bibi” Netanyahu has found himself in the same position as Republicans. He has to smile and support a man to get what he wants while trying to ignore the fact that the man is an idiot.

While on his tour of the Middle East and Europe, foreign leaders and diplomats have been coached to flatter Trump. They’re to compare him favorably to Obama and compliment him on his electoral victory. The man is a pushover.

Donald Trump isn’t just simple-minded enough to manipulate, for our friends and foes alike. He’s not just dangerously insecure and intellectually ill-equipped to do his job. He can’t keep his mouth shut. Along with those high negatives, Trump puts his ego over national security.

Donald Trump is a national security risk and it’s time for America to fold this hand and move on. He’s a pain in the ass. Just ask Bibi.