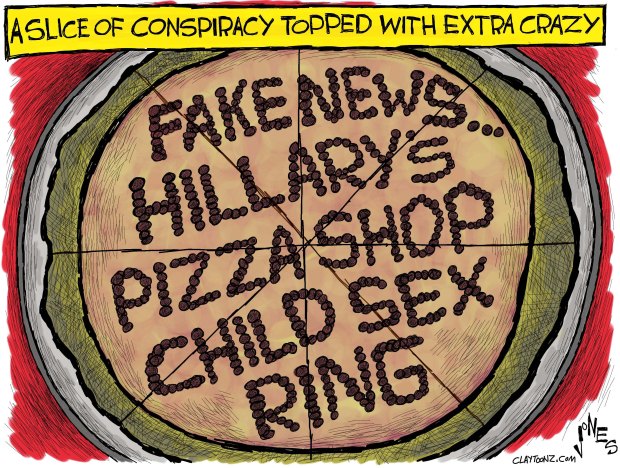 Too little too late, major news organizations started to report on fake news AFTER it helped elect an orange nimrod president of the United States. Now we have a nominee to Secretary of Housing and Urban Development that needs to be told that “HUD” is an acronym.

Fake news is very dangerous. It’s gone beyond the danger of placing Donald Trump (with the help of Wikileaks, the FBI, the Klan) in the Oval Office. Now innocent bystanders are being harassed and actually shot at.

Comet Ping Pong is a very popular pizza restaurant in Washington, D.C. A few months ago Wikileaks released an email from John Podesta between him and the owner of Comet about holding a fundraiser for Hillary Clinton. From there conservative wing nuts started discussing the connection between Comet and the Democratic Party, and then it went to Reddit, Facebook, Twitter, and then the fake news sites created a fake story that Hillary Clinton and John Podesta were kidnapping children and running a child-sex ring out of the Comet Ping Pong.

Another factor is that the owner used to be in a relationship with David Brock, a former conservative who turned liberal and now runs Media Matters which goes after conservative news stories. Their relationship ended five years ago but some want to punish him for his association with Brock. I hope nobody tries to punish me for who I dated over five years. Wasn’t dating them then punishment enough?

The owner and his staff have received intimidating, bullying, and threatening phone calls, emails, tweets, and weird visitors (do they draw political cartoons?). The conservative bullies even swiped photos the staffer’s children from their personal Facebook pages and started posting them. These are horrible people.

You would think that you don’t have to be the most skeptical person in the world to be suspicious of a story about a presidential candidate running a child sex ring out of a pizza parlor. At the very least a normal person would check into it and discover it’s total crapola within about twelve seconds. Conservatives don’t verify. Instead they spread the story around until a crazed lunatic drives from North Carolina to Washington with a gun and starts shooting at Comet Ping Pong, which actually happened.

They believe Obama was born in Kenya. That the pope endorsed Donald Trump, Hillary Clinton has Alzheimer’s, a Texas town was quarantined over Ebola, and that an FBI agent and his wife were involved in a murder/suicide from investigating Hillary Clinton. In case you haven’t caught on yet, those stories are all fake. The FBI story may have been the most popular as it was shared over 500,000 times on Facebook. Your dad probably shared it. It made its creators over $8,000 from ad revenue.

The people who create fake news do it to make money from ad revenue. They tried it with stories to outrage liberals but they weren’t very successful, as liberals tend to look stuff up. Also, liberals are a bit more educated and can detect B.S. when they smell it. Conservatives roll around in it.

The bizarre thing to me is that many conservatives in the media roll around in it. I personally know several conservative political cartoonists who are STILL spreading fake news and believe theories debunked long ago. When they’re called out on it they demand that you prove them wrong, as they’re really good at spreading fake news but can’t be bothered with verifying it for themselves. After the proof is shown to them (or the lack of proof their story is true), they start the deflection game. These people can’t disagree with a candidate’s position and argue against that. They have to create stories that they’re pimps and murderers. The barometer they use in determining if a story is true is that they want it to be true. Even Trump’s people are saying facts don’t exist anymore.

The pizza story has been debunked. It’s stupid that a stupid story like that even has to be debunked. This is like the need to debunk the Weekly World News or professional wrestling (there’s gonna be a lot of references to professional wrestling for the next four years). It doesn’t need to be debunked. Yet while I was researching for this I followed a few of the hashtags on Twitter regarding this story and there’s still people spreading it. They’re claiming the major news outlets are lying over it and that nobody ever attacked Comet Ping Pong. Stupid people don’t know they’re stupid, even after you tell them.

This isn’t just the backwoods-hillbilly element of the Republican Party. Donald Trump’s pick to be his national security adviser, retired general Michael Flynn, Tweeted out allegations accusing Clinton of sex crimes with children. His son and chief of staff, Junior, has been an active participant in “pizzagate.” This is the “best” that Trump is giving us. These guys are going to be his advisers but they can’t detect fake news…or bother to verify it. You’d think a presidential adviser would be able to sniff out the bull in a Clinton big pimpin’ story.

Conservatives often argue they’re the intelligent ones but evidence and their actions makes it really hard to press that argument. And that’s not fake.

Hey, do you want people to stop accusing you of being stupid? It’s easy. Stop being stupid.

Did you like this cartoon? Want to help a cartoonist make a living? Look to the right of this page and make a donation through Paypal. I need to buy pens, paper, sandwiches, etc.. The starving cartoonist it. If you’ve donated in the past, THANK YOU!!!