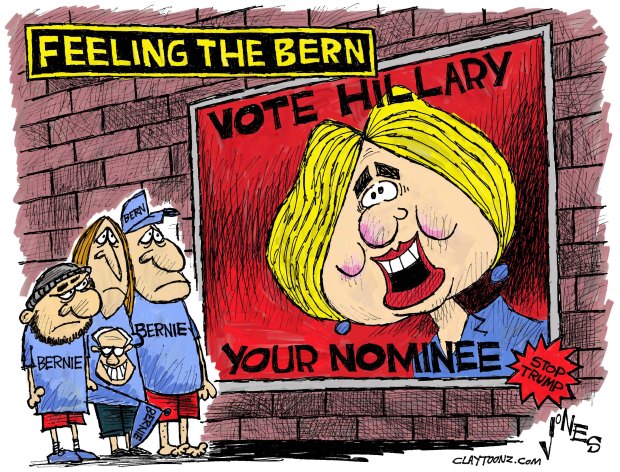 A lot of Bernie Sanders’ supporters are feeling a bit burned today. It’s over. Those who don’t feel burned are the ones in denial. They can take consolation that the burn they feel today is nothing compared to what Republicans are going to experience in November.

Bernie Sanders started off as a fringe candidate. I like to remind people when one of my predictions comes true, like predicting Bernie wouldn’t get the nomination (which was not a bold forecast). I’ll also point out that I was wrong at the start of Bernie’s “fringe” campaign. I drew a cartoon of Hillary’s campaign with her “Scooby Van” flush with cash, and Bernie’s campaign living in a “van by the river,” focusing on how he wouldn’t be able to raise money. Despite that cartoon being widely read at the time, and even making USA Today, talk about being wrong.

Bernie proved a lot of people wrong. Bernie Sanders set new records, and changed the landscape on fundraising. He avoided super pacs and corporate funding, with the bulk of his campaign’s support coming from individual donors. Sanders states every day that the average contribution is $27.00. That is impressive.

Sanders is changing the focus of his campaign on the issues he supports being included in the Democratic Party’s platform. Those issues range from a $15.00 minimum wage, free college, and ending corporate campaign funding. The Democratic Party would be wise to include each of those issues in the platform. To be honest, if Hillary Clinton adopts his core issues she would have a better chance of implementing them than a President Sanders. Really.

Bernie is still campaigning. He’ll see his campaign all the way through California. Hillary’s campaign would be smart not to begrudge him that.

Sanders may pretend he’s still vying for the nomination, but it’s over. There is no possible path for that to happen unless a fake GOP conspiracy about Hillary actually comes true.

I am really glad Bernie Sanders ran for president. I share his views on pay, equality, race, campaign finance, and education. I’d like to see those advanced. If they poll well enough, then Hillary Clinton will push them too. That is the biggest thing about Clinton I’m not a fan of.

OK, Sanders supporters. Let me have it. You’re running out of opportunities.