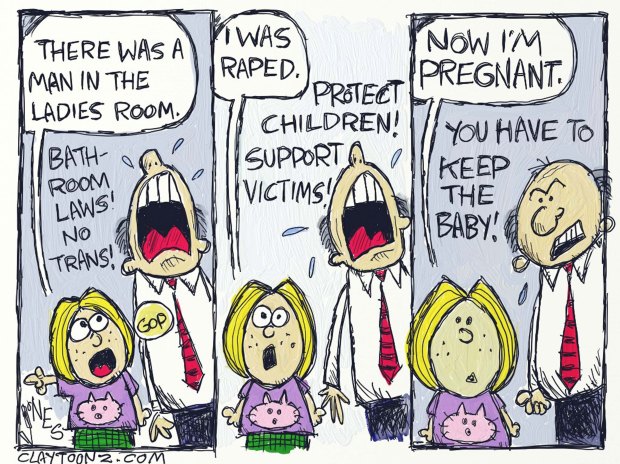 This is a bonus cartoon. That means I didn’t put as much work or time into the artwork. I had the idea and figured the majority of my newspaper clients would recoil at the sight of it. So I drew it on my tablet while I was out with some friends. That means it was drawn with a stylus. No paper and no ink. I think drawing on my tablets makes me a bit more creative and allows me to get weirder than I usually am, if you can imagine that.

I love that conservatives bring up one or two examples of a man invading a unisex restroom. They use that as their reason that the new law in North Carolina is valid. Republicans just love being bullies. The thing is, their examples don’t bring up transgenders.

Here’s a little sense for you. If a child is in a public restroom, wouldn’t their parent be with them? If you’re in a restroom and someone makes you uncomfortable, wouldn’t you leave the restroom? Normal people do not hang out in a public restroom. You do your business and you leave. A normal person is not there to make friends, which is something a Republican would attempt in an airport restroom.

I also love that they are so worried about the potential of someone being raped while after that woman is raped, they don’t give two flips about her. They would rather spend the time trying to redefine rape or telling the victim they should be forced to see out a pregnancy their rapists put them through. What charming fellows they are.

Basically, Republicans are assholes. If vaginas had bullets, they would want to set them free.