The first response that Nikki Haley, governor of South Carolina, should have had after the massacre at Emanuel AME Church should have been to call for removing the Confederate Battle flag from the grounds of the state capitol. Haley and several GOP candidates for president spent a few days defending the flag or trying to avoid the issue.

On Monday Haley called for the flag to come down. Several Republicans have followed suit and in Mississippi a Republican in the legislature is calling for that state to remove the emblem from their state flag.
As Haley called for bringing the flag down she talked about understanding how many view the flag with pride, as a symbol of heritage and history. Of course she had to say that. That’s South Carolina. They once threw out a Republican governor for calling for the removal of the flag.
Will removing the flag stop racists from being racists? No but will stop governments from aligning themselves with racist movements, thus appearing to endorse them.
With the flag on top of the state capitol and then on the grounds, South Carolina was giving the finger to every black citizen of their state. They say there’s two ways to look at the flag and they were only respecting the one. The one that offended. For decades they ignored that the state house also belonged to the minority population in the state. That’s some serious racism.
A lot of people use the tired defense of the flag that it’s history, heritage, honoring those who fought for the South. I’m going to try to put this in a way those defenders can understand: It doesn’t matter what you think.
Why doesn’t it matter what you think? Because you are using lies and reinterpretations of history to base your argument.
The flag didn’t have anything to do with South Carolina (or Mississippi, or Georgia) during the Civil War. The present one on the grounds of the state capitol was the battle flag for the Army Of Tennessee. The one that was on their dome was the battle flag for the Army Of Northern Virginia.
It was adopted by the Ku Klux Klan when it formed in Tennessee. In 1862 the flag was put on top of the Capitol dome in South Carolina to rebel against the Civil Rights movement and desegregation. Nice.
Here’s another factoid for you: The Civil War was fought by the South to preserve slavery. South Carolina was the first state to attack the north (Southerners love to talk about northern aggression. That’s like saying Poland was aggressive to Nazis). South Carolina was the first to secede and in their statement of secession there is heavy mention that the reasoning was because the north elected a president “hostile” to slavery. The war was about slavery. End of discussion.
That flag is not your heritage unless you had a relative in the Army of Northern Virginia or Army Of Tennessee. Hang it in your yard or fly it from your mobile home. That’s fine. Do what you want on your private property. The only other way the flag is your heritage is if your ancestors were members of the KKK.
The Confederacy had a very short life. For Southerners wanting to be proud of their heritage why do they only cling to four years of it? The Nazis and the Swastika flew over Germany much longer and you don’t see that nation clinging to that as their heritage.
The Confederate flag represents hate, segregation and hate. Unless you’re for those, put the flag away.
The other thing is, why are you proud of being a traitor?
I’d like to congratulate the GOP on joining the 21st century, some what. Where ya’ been?
Here’s the rough. 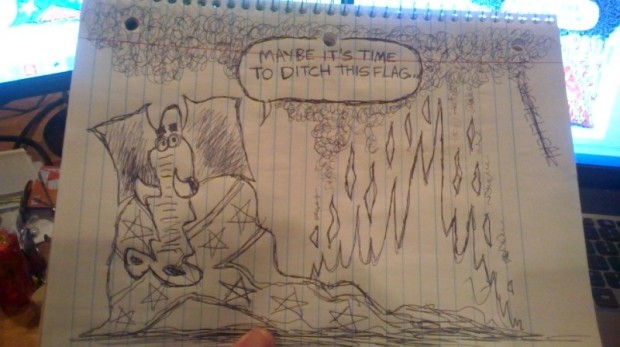