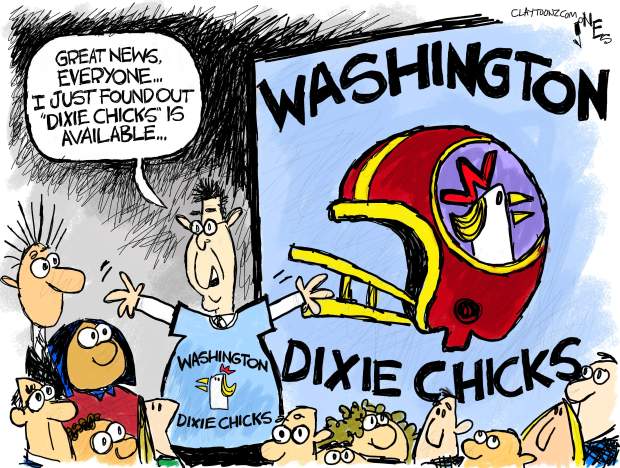 You’re getting this bonus cartoon today just because I thought of this and wanted to have fun with it.

With the news today the Washington Redskins will finally change their racist name after 87 years and after owner Daniel Snyder vowing to “never” change the name, there’s been a lot of outrage from white people. It’s always white people who tell us something racist doesn’t offend minorities.

After protesters took to the streets demanding change after the murder of George Floyd in Minneapolis by corrupt murdering cops, there’s been a lot of awakening in this nation. NASCAR banned the hate flag. Music groups are changing their names. And now, the Washington Redskins are removing their racist moniker.

Conservatives all received a talking point of calling this “cancel culture.” It pisses them off like political correctness. But here’s the thing, kids. Political correctness comes down to not being an asshole. Cancel culture comes down to not being racist. Trump supporters HATE being told they should stop being racist assholes.

On those notes, The Dixie Chicks will now just be “The Chicks.” They caught hell back in 2003 for criticizing George W. Bush after we invaded Iraq. The Chicks have a wide audience but a huge percentage of it is country. Country music lovers aren’t known for their wokeness. The Chicks angered their fan base and were personally pilloried publicly (say that three times fast). But, they never backed down like the Goya president will soon (I’m calling it, kids). Now, The Chicks have removed “Dixie.” I think they’re going to be OK.

Lady Antebellum took “Antebellum” out of their name and decided to go simply with “Lady A.” The name “Lady A” must stand for “Lady Assholes” because they’re now in a fight with a black female performer who has been going by “Lady A” for years. And her first name actually starts with an A. The Antebellum group got a copyright/trademark on the name, so they own it legally. But, it’s an asshole thing to do. They should give it to the black woman, the original Lady A (did they not research before announcing their new name?) who’s been marketing it for years. What the hell, Lady Antebellum? You need that name now (see what I did there?)? These are white people, dropping their name in the spirit of wokeness, then demanding reparations for it from a black person. Seriously.

As for the Skins, I joked on social media today they should go by the “Washington Honkeys” for the next 87 years. The post has received a lot of name suggestions and I have to say, my favorite so far is the “Capital Crackers.” I wanna see helmets with saltines on them.

I’m looking forward to being disappointed with the Washington football team’s new name. My personal fave, other than the “Crackers,” is “Redtails.” What do you think?