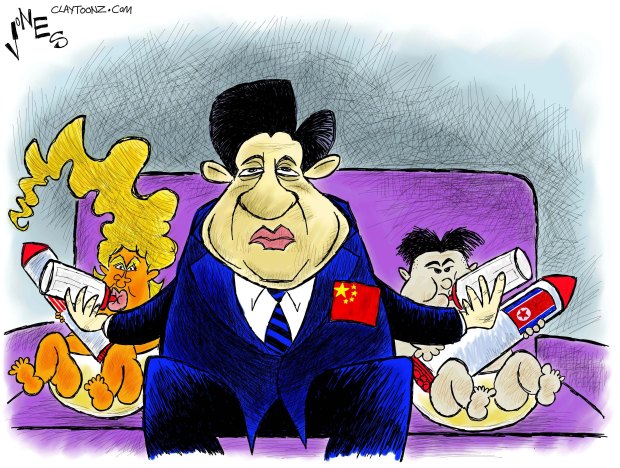 Several world leaders have already had the displeasure of meeting with Donald Trump. I feel especially bad for China’s president, Xi Jinping, as that poor bastard has to meet with Trump and Kim Jong Un of North Korea.

For years the world has been afraid of an ill-tempered, irrational, immature tyrant with ridiculous hair who has nuclear weapons. Now there are two of them.

While conservatives, liberals, and member of the press alike are waving their pom-poms cheering Trump’s missile strike against Syria, it should truly scare the living hell out of all of us.

Trump chooses to be motivated by pictures of dead babies, and emotionless toward others. If he can be moved to enact the U.S. military by pictures on CNN (or in his case, Fox News), my god, what will he do if something bad gets exposed in North Korea? If Kim attacks a Kentucky Fried Chicken we’re going to war.

Creating a few potholes in a runway in Syria will only move Assad to kill more of his own people. He won’t attack the United States. Kim Jong Un kills his own people just because it’s Tuesday. The North Koreans have cultivated an environment where families turn on each other for survival. Kim will not kill his own people to send us a message as we already got that message. He’s usually content with exploding nukes in his own nation and shooting missiles into the Sea of Japan. If Trump bombs one of his runways then Kim will want to make a bolder statement.

The only way to get to North Korea is through China, literally and figuratively. We need diplomacy to make that journey. Unfortunately our diplomatic measures are led by Donald Trump.

That’s truly worth crying about.