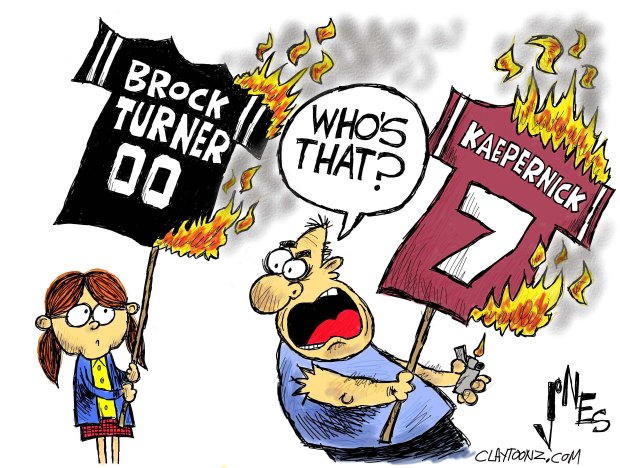 People need to put a little more focus into their outrage.

Former Stanford student and convicted rapist Brock Turner was just released from jail three months into a six-month sentence. Many critics of his lean sentencing point out there are African-Americans serving much harsher sentences for lesser offenses that are non-violent, like drug possession.

Meanwhile, a lot of people are still engaging in full rage hissy fits over Colin Kaepernick refusing to stand for the national anthem because he doesn’t like the way this country treats black people. Donald Trump tells us on a daily basis this country isn’t great and so-called patriots want to give him our nuclear codes. A black athlete tell us it isn’t great and everyone loses their minds.

I am much less bothered by an athlete engaging in a silent and peaceful protest than I am with white privilege slapping a white rich kid on the wrist after he rapes a young woman.

If you’ve engaged in social media or in a conversation expressing outrage over Kaepernick but have remained silent on Brock Turner, then you have proven Kaepernick has a point.

Maybe you should sit down.