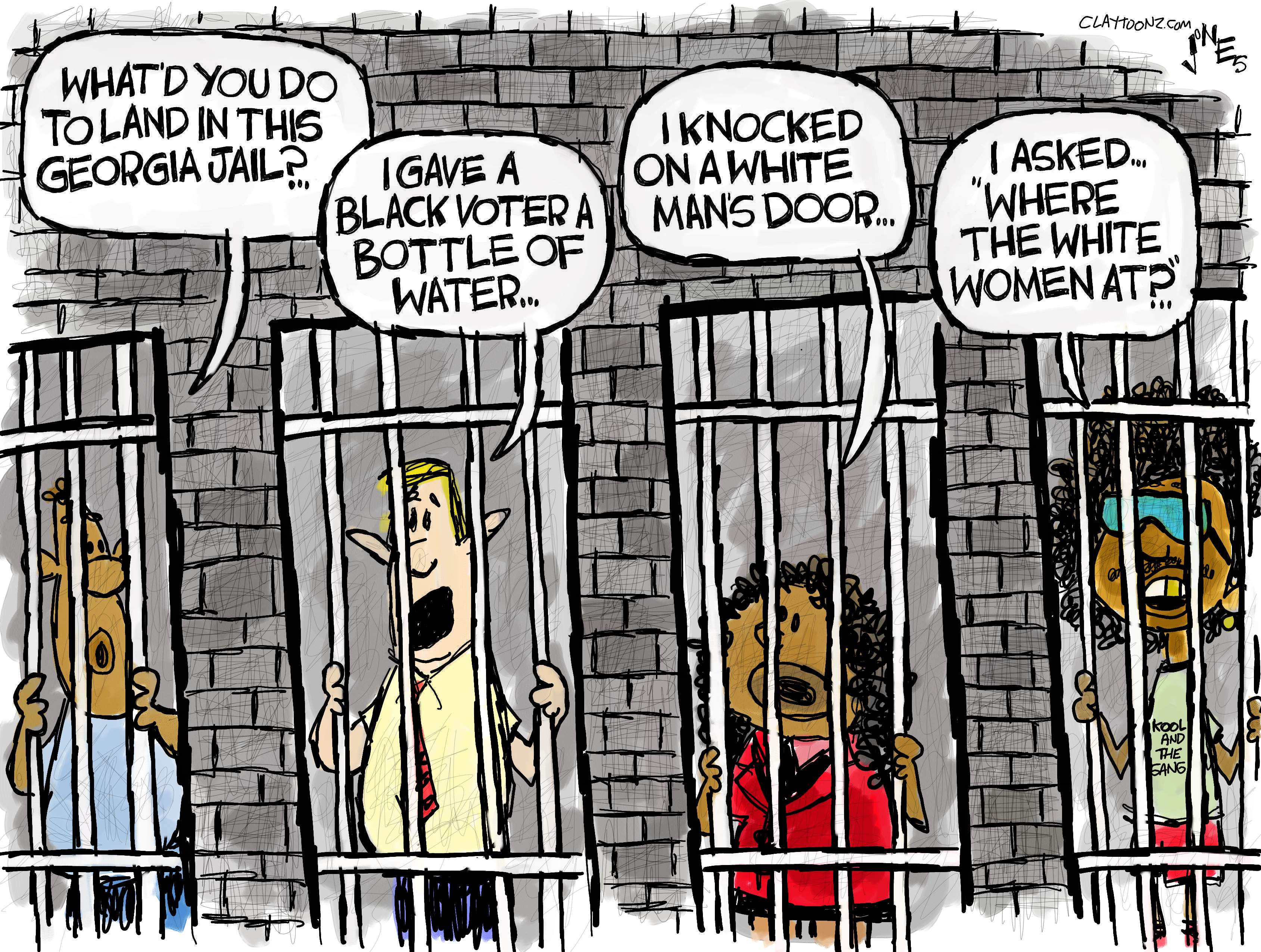 While Georgia governor Brian Kemp was signing a bill into law making it harder for voters to vote (including a provision that criminalizes giving water to voters in line), surrounded by a bunch of white men underneath a painting of a plantation, a black women was outside the door being arrested for knocking on it.

Representative Park Cannon was knocking on the door when Georgia State Troopers arrested and frog marched her from the building. Cannon is a Democrat who represents a district in east Atlanta, and she was protesting with several other Democrats. She was told to move away from the door she had knocked on several times. After being told to move away, she knocked on it again.

What the State Troopers did was ridiculous and racist. Park Cannon did what the late Georgia congressman and civil rights icon John Lewis would describe as “good trouble.” Fortunately for her, the cops didn’t crack her head open like they did to Lewis.

Cannon asked while being grabbed by the cops, “Why am I under arrest? There is no reason for me to be arrested. I am a legislator!” The cops did not answer her, probably because they hadn’t decided what to charge her with yet. That’s a southern police tradition. Arrest black people and decide the charges later.

They finally came up with obstruction of law enforcement and disrupting a session of the Georgia General Assembly, which amounts to two felonies. Plus, those two charges sound a lot better than “knocking while black,” which was she was actually arrested for.

The entire incident was caught on video and show Representative Cannon wasn’t threatening anyone and wasn’t much of a disruption either. I get phone calls about my car’s warranty that are more disruptive than what Cannon did. I wish someone would frog march those fuckers.

Senator Raphael Warnock visited Cannon in jail, which makes me want to know how long they kept her in jail. Warnock compared it to the Trump terrorists who invaded another capitol building, the U.S. Capitol, that wounded at least 140 cops and left one dead. He said, “I want to know what makes her actions so dangerous, and the actions of those who were trying to undermine an actual election so benign in the minds of some politicians.”

Racist Republicans in Georgia and across the nation know they’re losing the ability to win elections. That’s probably because they’re racist. Instead of washing away their racism and promoting policies that are at least not harkening back to the Jim Crow era, they’re doubling down.

Racist Republicans are doing everything they can to make voting while black illegal. And if you’re black and you have something to say about it, they’ll make that illegal too. If you don’t believe me, ask Representative Cannon, who was literally arrested for knocking while black.

In 1955, Emmett Till was murdered in the deep south for supposedly whistling at a white woman. Since Cannon was only arrested, congrats to Georgia whites for all the progress they’ve made.

Creative note: Yes, I use quotes from Blazing Saddles all the time, especially this one. Also, geeky techy note: I forgot to add a layer before coloring this cartoon but that worked out. In my art program, water color, which I used, doesn’t smear the ink. Others like acrylic do. And in case you don’t already know, all my cartoons are created entirely on a digital platform. There is no actual ink or paper.