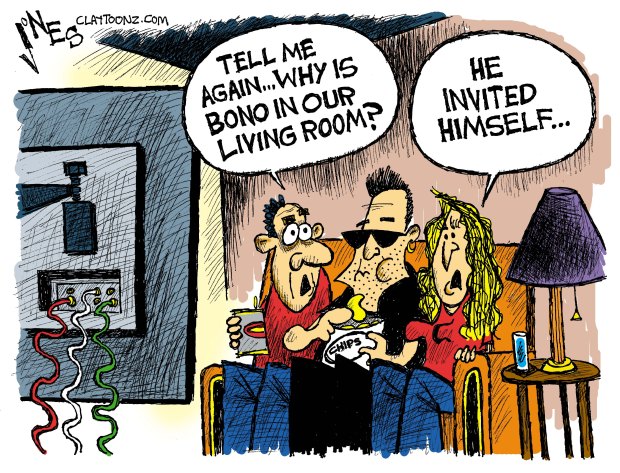 Six days ago the rock band U2 released their new album, Songs Of Innocence, and in a partnership with Apple, dumped the apple on over 500 million iTunes accounts.

Another way to look at it is “how freaking presumptuous are you, U2?”

Several months ago I was at a restaurant and someone who worked at a very popular tattoo parlor in town put a bumper sticker for their establishment on my car.  They felt their place was so cool I should have been grateful for the free gift on my rear window.  Never mind the fact I didn’t ask for it.  Yeah, I could just scratch it off, but I wasn’t looking for a new chore of scratching their advertisement off my car.

That’s kinda the same way with this U2 and Apple spam dump.  If you don’t want it then you can simple hide it from your iTunes account (apparently it can’t be deleted) and if you’re not careful you might hit some sort of order thingy in the process and end up buying songs you don’t want.  I don’t know how it technically works as I don’t have an iTunes account.  I still manually place CDs into a CD player….all while dragging my knuckles.

It’s a shame U2 has to be such pretentious pricks.  They assume everyone wants their album.  They used to be a rebel sort of band.  Now they’re totally corporate and spamming all of civilization with music that I’m pretty sure is going to suck as they haven’t released a good song since the early 90’s.

Did I mention they’re pretentious?  On their last tour they hit the road with a huge stage monstrosity they dubbed “the claw.”  They used three of these 167 feet tall monsters (so they could set up in other cities while playing) and it took 120 trucks to cart it around.  They stated at the end of the 210 dates tour that they would donate each of the three Claws to different cities to become permanent structures because who doesn’t want a U2 memorial in their city?

OK, so they’re not as bad as Hitler.  They’re just making music I don’t like and forcing it on people.  As a musician I find the band’s destroying the economic structure for newer bands more troubling.  U2 doesn’t have to sell albums, CDs or downloads anymore (obviously).  They make most of their money touring.  A new band needs every cent and exposure they can get.  Who’s going to buy music if it’s given away?  A new band you have never heard of can’t afford to give it away.

Bono is a very charitable individual.  I’ll give him that.  His band made great music a long time ago.  They present themselves as working toward what’s best for everyone.  In this case they’re only doing what’s best for U2 while it destroys potential music careers for others.