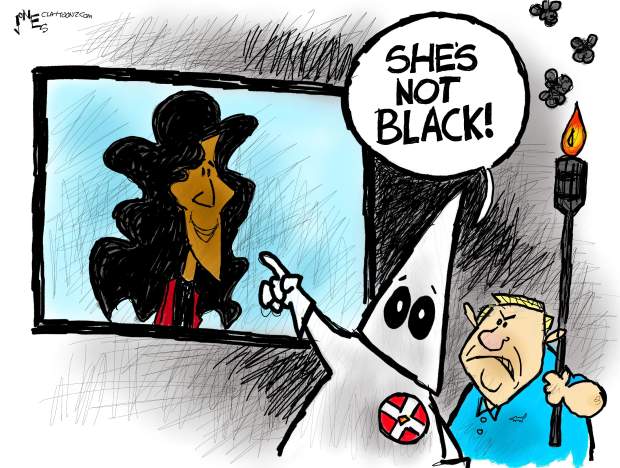 Let’s get one thing straight. The entire birtherism campaign was totally and absolutely racist.

To question the legitimacy of the first black president’s birthplace without any grounds or evidence in doing so, was racist. It was, is, and forever will be. Add to it, the questioning of sincerity of religion, then you’re going full-on troglodyte.

Donald Trump is a troglodyte and he built his political career on hate and appealing to white racists. He’s still doing it. Now, Mr. White Power tweeter is questioning her race and legitimacy…just like Mr. Two Corinthians and Grab Them By The Pussy, is questioning Joe Biden’s faith. I mean, Joe Biden has never had to teargas people to go to church.

Donald Trump likes to do that thing where it’s not him making a claim, but pointing the claim from others, thus saying, “I’m not saying it,” but giving the “many people are saying” bullshit. It’s his way to promote and endorse wild conspiracy bullshit…when it’s not actually his own. These are what we call tactful endorsements.

In June, 2019, Donald Trump Jr. sent out a tweet claiming California Senator and, at that time, presidential candidate Kamala Harris wasn’t black. It’s funny he didn’t question the race of any of the other candidates, just the lone black female. Someone must have convinced him it was racist because he removed it very quickly, but not quick enough.

Now, as Republicans struggle to find a line of attack against Harris, going from she’s too liberal, too conservative, too mean, too ambitious, too “nasty,” they’re now returning to the “she’s not black” and questioning if she’s qualified to serve in the presidency.

If you are not born in the United States, then you are not qualified to be president. There are technicalities that seem to fly, like being born on U.S. property in a foreign nation, like John McCain (nobody questioned his legitimacy), or even to at least one U.S. born parent, like Ted Cruz (born in Canada to a U.S. mom and a Cuban fucknut father). In case you’re a Republican, those rules apply to the vice presidency, too, as that person may become president.

Kamala Harris was born in Oakland, California. Now, Oakland may appear to be some third-world nation at times or even another planet, but it’s in the U.S. of fucking A. Kamala Harris was born in the United States. Were her parents citizens at that time? In case you’re a Republican, it doesn’t fucking matter. She was born in America. She’s more American than Ted Cruz. Less oozing reptilian too.

The other line of attack is that she’s not “African-American” because her father is from Jamaica. Jamaica is not in Africa, but where do you think the majority of Jamaicans are descended from? And the other line of attack is, she’s not black because she’s from Jamaica and her mom is from India. In case you’re a Republican, India is in Asia. Asia is a continent, just like Africa (No, Africa is not a nation). Kamala Harris is black and Asian.

If she’s not black, then why was she part of the busing program when she was a child? Hmm?

I would like to explain why she’s not black, in the minds of Republicans, because her dad is from Jamaica, so you can understand it better, but I don’t understand it. I think you gotta be very white and racist to get this one. I don’t get it. Maybe someone should explain it to me. Can anyone translate fucknut?

Is she literally black? Maybe she’s more of a latte with some cream in the same way I am like a big bag of Wonder bread with a bad attitude. But she’s black. If she identifies as black, she’s black. Is she African-American? If she identifies that way, yes. Is she technically? Yes. Is it racist that racist motherfuckers forced us to talk about this. Hell fucking yes. Who the fuck cares? I’m more concerned about her position on baby jails and emolument violations.

What’s the issue if she’s not black? That she’s not and claims she is? She’s supposed to be dishonest? She was trying to get a leg up in racist America by claiming she’s black? Have you looked at all the things Donald Trump has claimed he is but he’s not? Great businessman, patriot, Christian, family man, great negotiator, claims he knows more than anyone else about anything. The guy isn’t even a good golfer and after bragging about it on a debate stage, he probably has a teeny tiny, non-functioning…

Donald Trump doesn’t know shit. Yesterday, the racist-in-chief said, “I just heard it today that she doesn’t meet the requirements and by the way the lawyer that wrote that piece is a very highly qualified, very talented lawyer.”

He’s probably just as qualified of a lawyer as Dr. Demon Sperm is qualified as a doctor.

He continued, “I have no idea if that’s right. I would have assumed the Democrats would have checked that out before she gets chosen to run for vice-president. But that’s a very serious, you’re saying that, they’re saying that she doesn’t qualify because she wasn’t born in this country.”

Let me parse through that word salad: You think he’d get an “idea” before blathering off like he did. You would think he wouldn’t LIE that she wasn’t born in this country and he would have checked into it before making the claim. Finally, you would think the President (sic) of the United Freaking States of America would know the freaking requirements to become president. Jesus freaking shit this guy is racist and stupid. This guy isn’t even qualified to be a racist golf club president in The Villages.

Seriously? Being born in this country is a requirement to become president but a mental capacity test isn’t?

Kamala Harris was born in the United States of America. She’s over 35 years old. She’s been a resident of this country for at least 14 years. End of story. She’s qualified.

Even if she was stupid, sexist, racist, and instead of being black, was a giant orange shitball, she’d still be qualified.