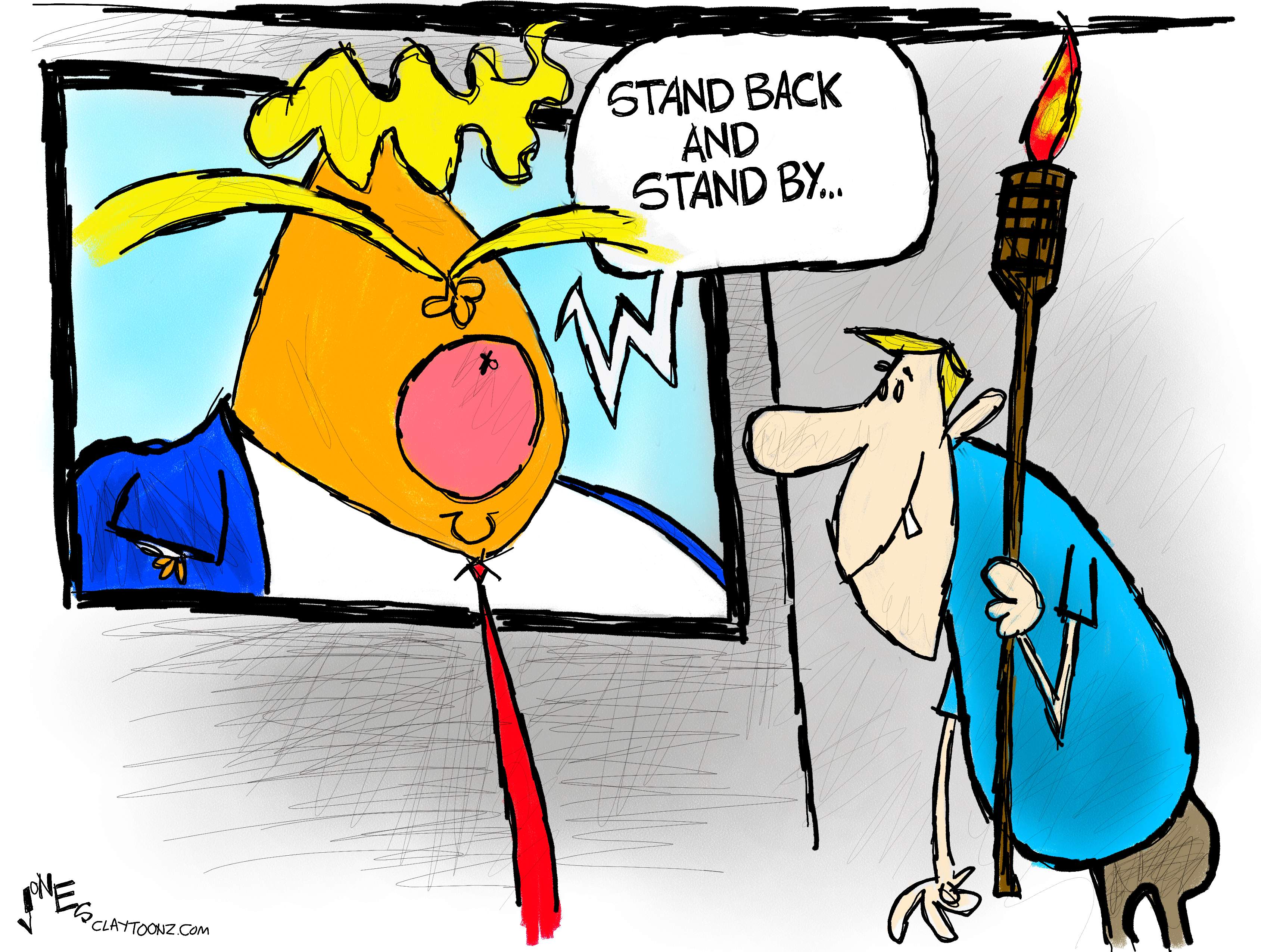 In case you missed last night’s debate, I’ll sum it up for you.

Will you shut up?

Donald Trump’s lies weren’t just lies but wild made up bullshit, like ballots were found in a river with his name on them.

He cried about the wrong people moving into the white suburbs. He said sensitivity training on racism was “reverse racism” that affects “specific types of people.” He called for his goons to stalk voting precincts on election day (which is illegal). When Beau Biden, a veteran, was brought up, Donald Trump refused to offer condolences to his father, but said he didn’t know him, and went into another of his many attacks on his other son, Hunter Biden.

Donald Trump even attacked Hunter Biden for having a drug problem. As with all things with Trump, he usually embodies what he attacks. So, he may want to lay off attacking a man because his son had a drug problem. Just saying…sniff.

But the biggest thing he did, just like when he defended Nazis in Charlottesville, last night, he supported a white supremacist group.

When Joe Biden brought up that white hate groups commit more violent acts than fictional groups like Antifa, Trump said it wasn’t true. When it was pointed out that Christopher Wray, his FBI Director had made that statement, Trump still said it wasn’t true. And when challenged to condemn Proud Boys, a white hate group, and their violence, he said he would but then turned around and told them to “stand back and stand by.”

Stand by? Stand by for what?

Keep in mind, Donald Trump continued to claim the election would be a fraud and refused to say he’d accept the results. Is this what Proud Boys is to stand by for?

Guess what. They are. Proud Boys didn’t just tweet that they’re “standing by,” but they even made a logo out of it. Proud Boys are celebrating and saying this is “Trump’s America.” They’re standing by for violence because the president (sic) of the United States told them to. We may have reached our ugliest moment of the Trump presidency.

What Trump did last night wasn’t a dog whistle. It was a shout-out. He called for the racists to help him.

Mark Hamill tweeted the debate was “the worst thing I’ve ever seen, and I was in the Star Wars Holiday Special.” A lot of viewers blamed Fox News’ Chris Wallace, who moderated, but I don’t. It was hard to reign in. It was out of control. Chris Wallace couldn’t have done a damn to control that.

A lot of people said the microphones should be turned off for each person when the other is talking. I don’t think that would work with a lunatic like Donald Trump. Chris Wallace didn’t need to turn off Trump’s mic. Chris Wallace needed a cattle prod.

A post-debate poll showed 60% of viewers believed Biden won with 28% giving it to Trump. That 28% are Nazis. Only an imbecilic white supremacist would think what Trump did was good. But Biden didn’t so much win as much as Donald Trump lost.

Biden had his moments, such as telling Trump to shut up, calling him a clown, and calling him a racist. But for the most part, he was thrown off. But who wouldn’t have been? Have you ever had a train of thought, and while trying to deliver it, someone is barking at you? If you stop to respond to the barking clown, you lose where you were. It’s not Biden’s fault. It’s the fault of the barking clown.

Donald Trump’s campaign said he didn’t prepare much, but that’s a lie. He knew his talking points and he knew them well. I was slightly impressed he contained so much vile. You could tell he spent hours preparing. But, he prepared with a person like Rudy Giuliani. His strategy was to throw Biden off…by barking at him. For some dumb reason, the Trump campaign thought this was a great idea.

Donald Trump came off as a barking racist clown. He didn’t come off like someone you wanted as president. Even the Trump sycophants on CNN like Rick Santorum admitted it was bad.

There was immediate talk this was the last debate and there are expectations the next two will be canceled (with the Pence/Harris debate remaining). Some say Biden should refuse to be on a stage with the orange madman but I expect the Trump Campaign to cancel.

My concern was that Biden would hurt his lead in the debate. All Biden had to do was not do any damage. He didn’t do much which means he won. This 90 minutes of free air time only hurt Donald Trump…who was already hurting. Why would his campaign want to inflict more damage unto itself? Does the Trump Campaign believe they can control Trump to act like a human being at the next debate…or do they think the racist barking is good?

The best representative of the Trump campaign is also their worst.

I’m hoping there are no more debates between Trump and Biden. What we saw last night wasn’t good for anyone and it was an embarrassment for our nation. I’ve already received apologies from foreign friends this morning. I’m getting a lot of, “I’m so sorry for your country.” I heard from a person from Venezuela, “Hey…that happened to us too.”

Hopefully, what last night’s mockery of a debate did to help the nation is show we can’t have four more years of this. Hopefully, last night’s embarrassment rids us of the racist barking orange lunatic.

Last night also reminded us, it’s going to get worse before it gets better.