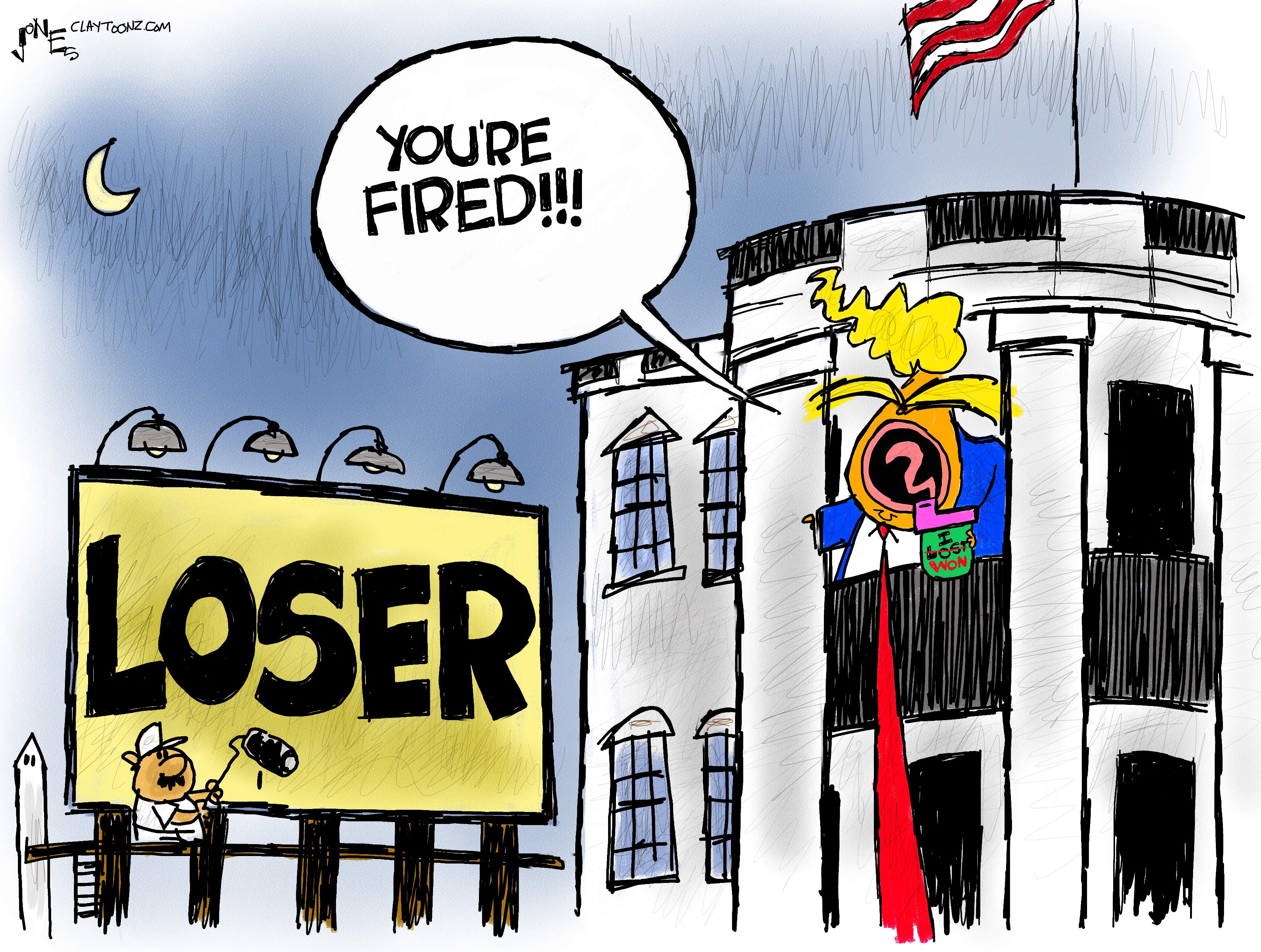 Donald Trump’s catch phrase from his fake reality show was “you’re fired.” He loves to present himself as a heavy-handed boss in total control with absolute authority. He fears nothing. In reality, he sends goons and henchmen to do his firing…when he’s not firing people over Twitter. Why does he do it this way? Because he’s a coward.

Donald Trump is more of an assortment of terrible personality traits than he is a human being. He’s racist, narcissistic, sexist, selfish, corrupt, stupid, clueless, immature, and a coward. He’s also ugly with a combover and orange goop on his face and wants to date his daughter. Find all that on a Hallmark card.

He didn’t fire James Comey to his face. In fact, he made sure Comey was out of town when he was fired. The same went for Rex Tillerson, who was on a plane…and according to some reports, on a toilet. He had one person fired because he testified against him…then had the witnesses’ brother fired because he looked like him. And since the election, Donald Trump has gone on a firing spree.

Donald Trump claimed he’d hire the “best people.” Actually, his administration has probably set a record for the number of former officials who have spoken out against it. And when he fires someone, their replacement is usually worse. Much worse. Was Mike Pompeo an improvement over Rex Tillerson? Who could have imagined Donald Trump could find a worse Attorney General, William Barr, than Jeff Sessions? You have to give it to Donald Trump. He’s really good at finding the worst possible people to put in the absolute worst places.

The people Donald Trump has fired since the election haven’t been dismissed because they’re not good at their jobs. No, they’ve been fired because they aren’t deemed sycophantic enough. To work for Donald Trump, you don’t have to actually be good at your job. You either have to be a total sycophant like Mike Pence, or his daughter. Tell me she has a clue about anything that’s going on.

Since the election, Donald Trump has fired 12 people. There will be more. On that list are Department of Homeland Security officials Bryan Ware and Valerie Boyd. He fired Defense Department’s chief of staff, Jen Stewart on November 10. Also on November 10 were the Pentagon’s undersecretary of defense Joseph Kernan, a retired Navy SEAL, and the Pentagon’s top policy official James Anderson, who both officially resigned but we know they were forced out.

He fired Secretary of Defense, Mark Esper, who publicly disagreed with Trump’s teargassing protesters for a photo-op. Three other Pentagon firings occurred shortly after.

Also “not fired” was The head of the Department of Justice’s election crime branch Richard Pilger, who quit in protest over William Barr using the agency to enable Donald Trump’s conspiracy theories regarding election fraud.

Trump fired Lisa Gordon-Hagerty, the administrator of the National Nuclear Security Administration; Bonne Glick, the deputy administrator of the U.S. agency for International Development; and Neil Chatterjee, the chairman of the Federal Energy Regulatory Commission. They were all nerds.

Speaking of nerds, Trump fired Michael Kuperberg, the scientist who oversees climate change for the U.S. Global Change Research Program and will be replaced with a science skeptic.

This week, he fired Chris Krebs, the director of the Department of Homeland Security’s Cybersecurity and Infrastructure Security Agency after his agency released a statement refuting Trump’s claims of widespread voter fraud. In fact, the statement said this election was the “most secure in our nation’s history.” Trump fired him along with a response to the “most secure” statement, saying, “was not!”.

Mark Esper says his replacement will be a “real yes man, and then God help us. Fortunately, the “yes man” will only be on the job until January.

Trump isn’t just firing people who hurt his feelings or don’t support his crackpot bullshit, but people who may stand in the way of him stealing this election from the American public.

We knew before Donald Trump was placed in power in 2016 that he’s a horrible person and unfit for the office. But everything he’s done since the election, putting himself before the nation and willing to destroy to seek revenge, is another confirmation that he doesn’t belong. Trump’s actions are reassurances America made the right choice in selecting Joe Biden over him. America, you were right to fire Donald Trump. Good job.

Donald Trump lost the election. He’s a one-term president (sic). He’s a loser. And there’s no amount of firings that will change any of that. Right now, he’s firing people because he got fired.

A lot of American Venezuelans voted for Donald Trump because they don’t want America to become like Venezuela, you know…where the leader refused to step down and recognize a fair election.

Sorry for the short blog. I woke to a surprise assignment today. 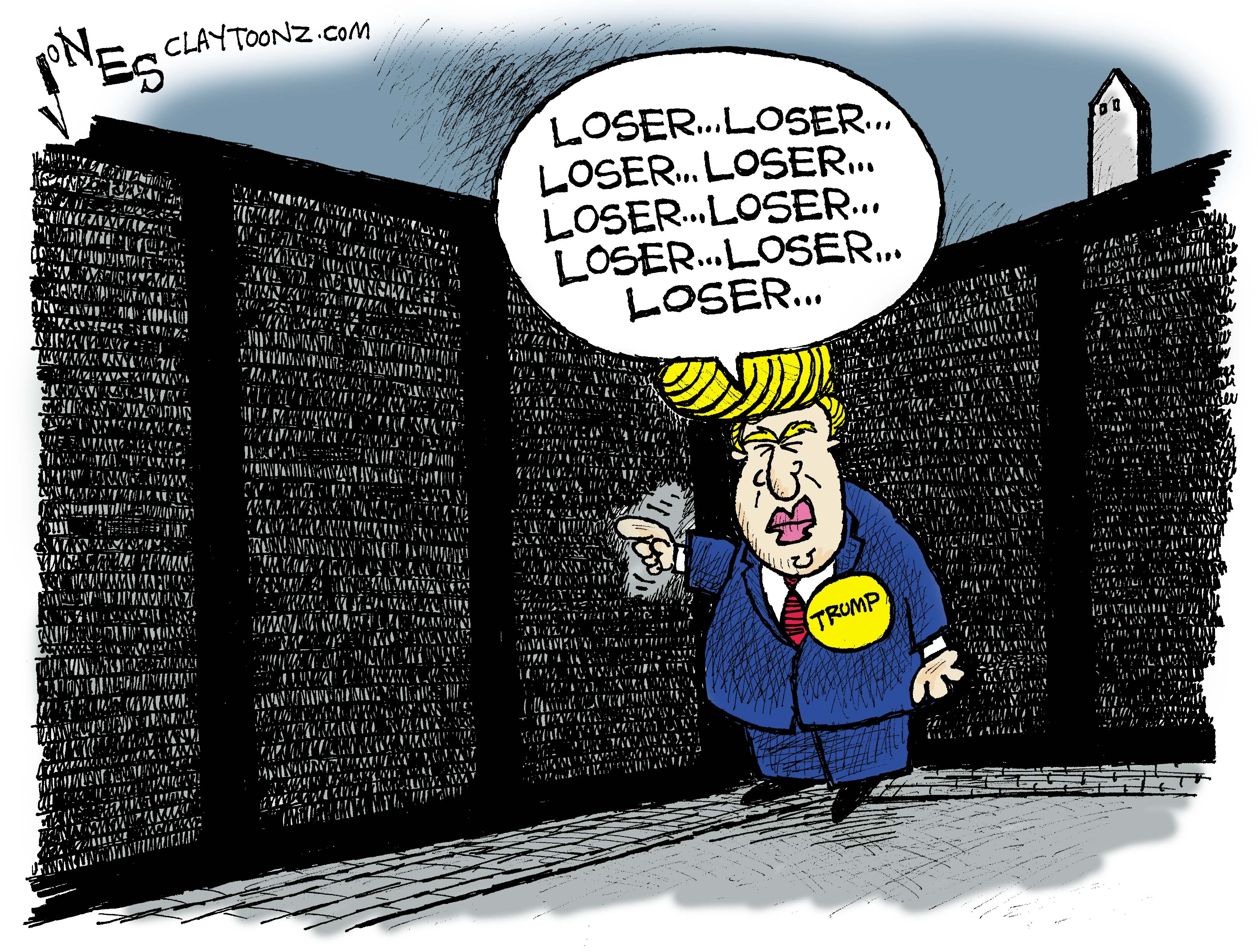 I’ve wondered if GOP primary voters would just lose interest in Donald Trump or if he would finally say something they can’t tolerate.

They can tolerate him questioning whether the first African-American president is qualified to be president by saying he’s not an American.

They not only tolerate him calling Hispanics “rapists”, they put him on top in the polls. Do you know who else made a large segment of his nation’s population into scapegoats? Hitler. Saying Hispanic immigrants are mostly made up of killers and rapists is extremely racist and xenophobic, yet Republicans excuse the guy, say he’s not being racist and he’s just guilty of being politically incorrect. A lot of Republicans don’t get subtlety. A racist would actually have to burn a cross while wearing a sheet and shout the N-word before they can acknowledge it’s racist (and most of them will look the other way).

But now Donald Trump has finally done it. He’s been on a roll of calling people losers lately. The guy really needs a thesaurus. On Saturday he said Senator John McCain is a loser because he was a prisoner of war in Vietnam. He also says he likes people who weren’t captured. This is something I don’t expect Republican voters to tolerate (since they’re all Patriots).

You don’t have to believe the war in Vietnam was a crisis the United States should have been involved in to realize that those who fought in it are heroes and patriots. To call someone a loser for defending his country is a repulsive act. It’s especially galling when the man doing the insults received four deferments and one medical release which saved him from the draft.

My father served in Vietnam. He was wounded. He carried shrapnel in his body for the rest of his life. While my father was dodging bullets in South East Asia, Donald Trump was dodging the draft to live another day to call those who served losers. If my father was still alive, death threats from Mexican drug lords would be the least of The Donald’s worries.

Nobody, including Trump, has expected him to win the nomination (OK. There are some seriously clueless and stupid people out there). The biggest mystery was how he would get knocked out. Now the only questions remaining are what day next week will he quit and what reasoning will he give?

I’m gonna go with Tuesday and Trump will say he’s quitting to save America by creating a new beauty pageant.