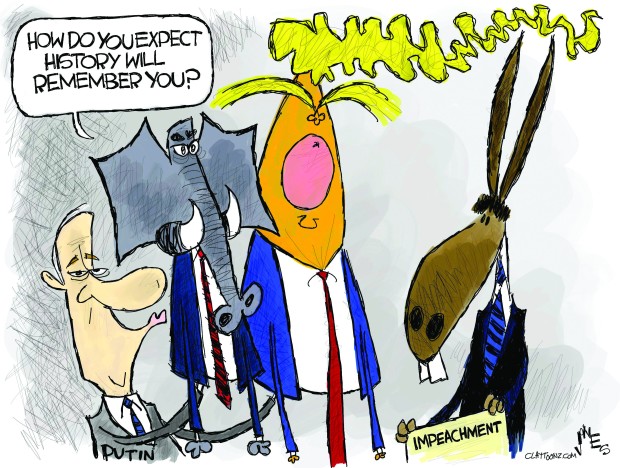 Republicans, including Donald Trump, claimed history won’t be kind to Democrats for the way they’ve treated Trump. In case you haven’t noticed, Republicans suck at history. Hell, they suck with their own history.

Here’s what we know: Vladimir Putin and Russia helped Donald Trump win the election. Russia meddled. Donald Trump knew Russia was helping him. His campaign even invited Russians into his campaign headquarters. Did they ever call the FBI? Nope. Instead, they scream about the FBI’s surveillance on suspected Russian spies and they never say anything about the suspects. His campaign tried to establish a back-channel with Moscow. Donald Trump has never voiced any opposition to Putin meddling in the 2016 election. History will remember all of this.

Republicans know Russia meddled. Instead of attacking Russia, they’re attacking the FBI, Democrats, and helping Vladimir Putin spread a conspiracy theory he created that Ukraine meddled in our election. It was reported this morning Trump’s “evidence” that Ukraine meddled in our election, according to a White House aide, is because “Putin told me.” History will remember this.

During a news conference this week in Moscow, Putin said stuff echoed by Moscow Mitch McConnell and other Republicans.

Vladimir Putin said the impeachment charges against Trump are “completely made up.” Putin also said, “The Democratic Party, which lost the elections, is now trying to revise this history through the means that they have at their disposal, first by accusing Trump of collusion with Russia. But then it turned out there was no collusion. It could not form the basis for impeachment, and now there is this made-up pressure on Ukraine,” said the guy who invaded, stole Crimea from, and created conspiracy theories about Ukraine.

Putin also said, “It’s unlikely they will want to remove their party member from office based on what are, in my opinion, completely fabricated reasons.” Putin’s argument was echoed repeatedly by Republicans on Wednesday before the vote to impeach Donald Trump. History will remember Republicans were in lockstep with a Russian tyrant who attacked their country.

Republicans point out the vote was totally partisan while missing the fact that every single member of one party voting the same is in itself partisan. History will remember this. As more facts come out about Trump’s corruption and probably encouraging more nations to help his campaign, history will remember the entire Republican Party became a cult and put idol worship before their nation.

History will remember Putin predicted exactly what the Republican Senate would do. Mitch McConnell, Lindsey Graham, and Ted Cruz proclaim loudly that they are not impartial witnesses and will conduct a sham trial, then saying it’s “comical” Nancy Pelosi is holding off sending them the impeachment for them to conduct their sham trial. History will remember that.

History will remember the president of the United States, who is currently pushing back on a wide-ranging piece of legislation meant to deter and punish Putin’s aggression and his interference in the 2016 election and has called for Russia to be readmitted to the G8, is Putin’s puppet. History will also record that the entirety of the Republican congress is Putin’s puppet.

What’s up to Republicans in the United States Senate is if history will record that every single one of them was also Putin’s Puppet.

This week’s cartoon for The Independent in St. George, Utah.

The church is currently threatening to excommunicate members who are gay. I was wondering how well they’ll look in history for this decision. Considering they didn’t allow black members into the priesthood until 1978, and something they resisted heavily before then, it seems to me they don’t learn from history. It’s like they’re saying “yeah, we were wrong that one time and though this is the exact same thing it’s not the exact same thing.” Good luck with that.

Here’s the rough. You’ll notice I made a few changes upon editors’ advice. 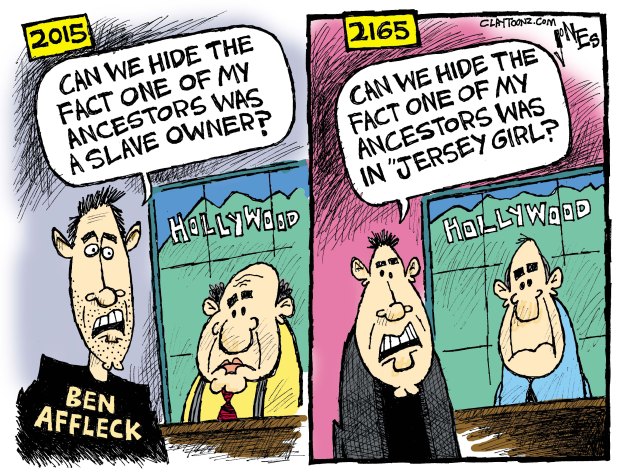 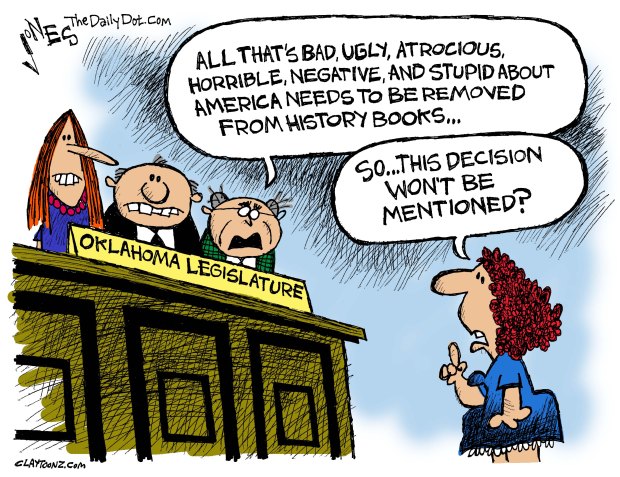 I actually drew this last weekend for The Daily Dot. I will be drawing another one tonight or tomorrow.