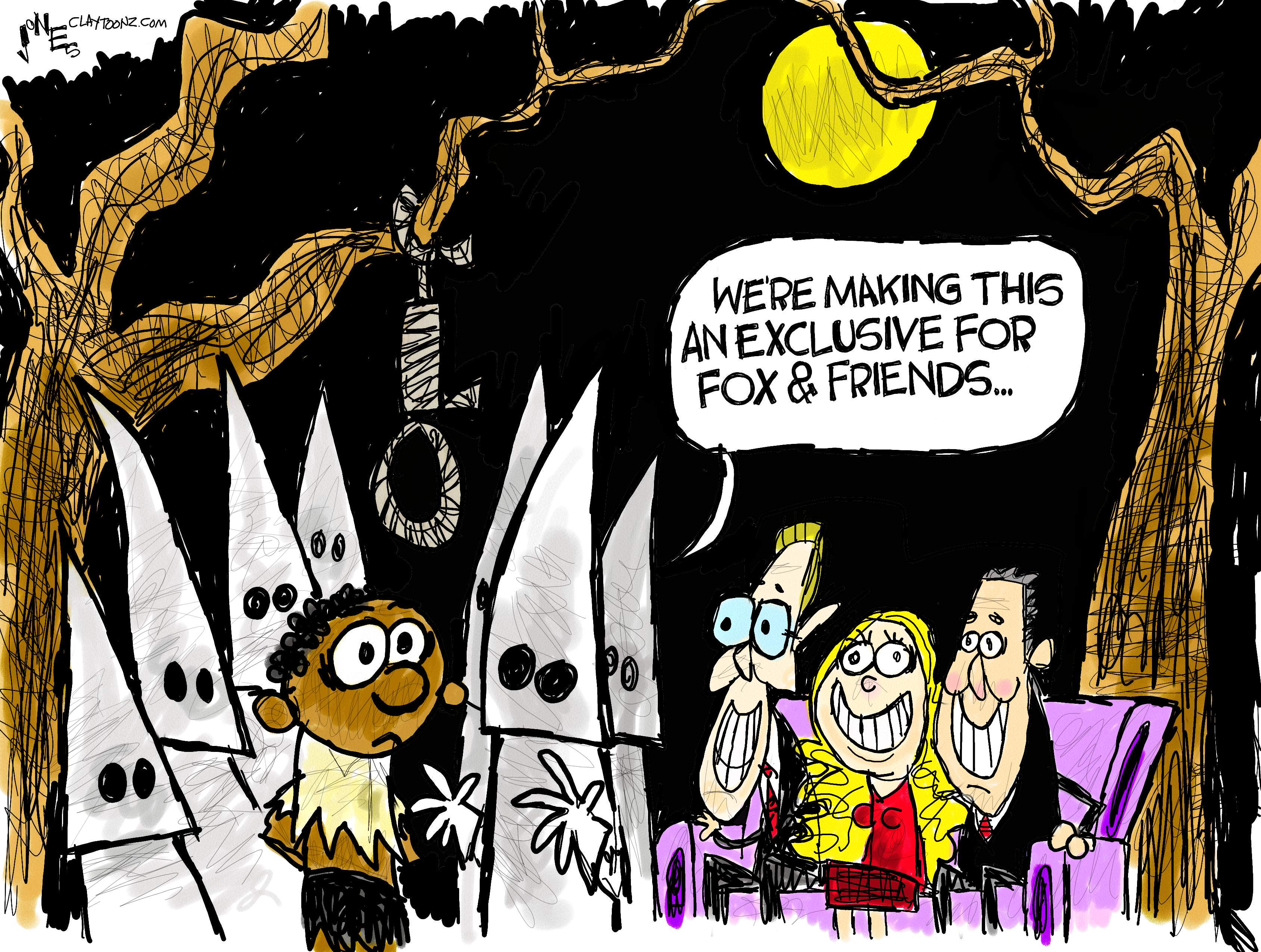 How much longer before we see a live execution on Fox & Friends? Now that South Carolina is going to start executing people by firing squad, any day now. South Carolina’s excuse is that it’s harder to get the chemicals for lethal injections and since this is Murica, there will never be a supply problem with bullets. Here’s another solution: Stop killing people.

Fox & Friends did get an exclusive today. Florida’s dipshit racist buttface governor, Ron DeSantis signed a new law, making it harder for blacks to vote, live on the air on Fox & Friends…and excluded all other news outlets from viewing the signing.

Since this was official state business, what right did he have in barring access from a free press? Take note, he also did this just days after World Press Freedom Day.

But the thing is, kids, this isn’t a new law that’s better for Florida or voting rights. If it was, he wouldn’t have made signing such a partisan bill on a political photo-op on Donald Trump’s favorite hater TV show. Now, when he signs the bill making it legal to run over black protesters in your car and murdering them, will he do that live from Mar-a-Lago?

Here’s my wish: The nine-ton Chinese rocket falling from space this weekend lands on Mar-a-Lago.

DeSantis had previously bragged that Florida’s presidential election was a model for the rest of the country. So why is he signing a bill based on bogus Trump bullshit? Donald Trump is not president (sic) anymore. Can we stop having laws designed to kiss his ass?

Since I don’t watch Fox, I can’t be sure…but how much do you want to bet that none of the goons on Fox & Friends stood up for their “journalism” colleagues at other outlets and questioned why they were the only ones present? The odds are better on the Chinese Rocket crashing into Mar-a-Lago.

Why can’t we have the Chinese rocket crashing into Mar-a-Lago while Ron DeSantis is kissing Trump’s ass live on Fox & Friends? Shit like that never happening is what’s keeping me very agnostic. 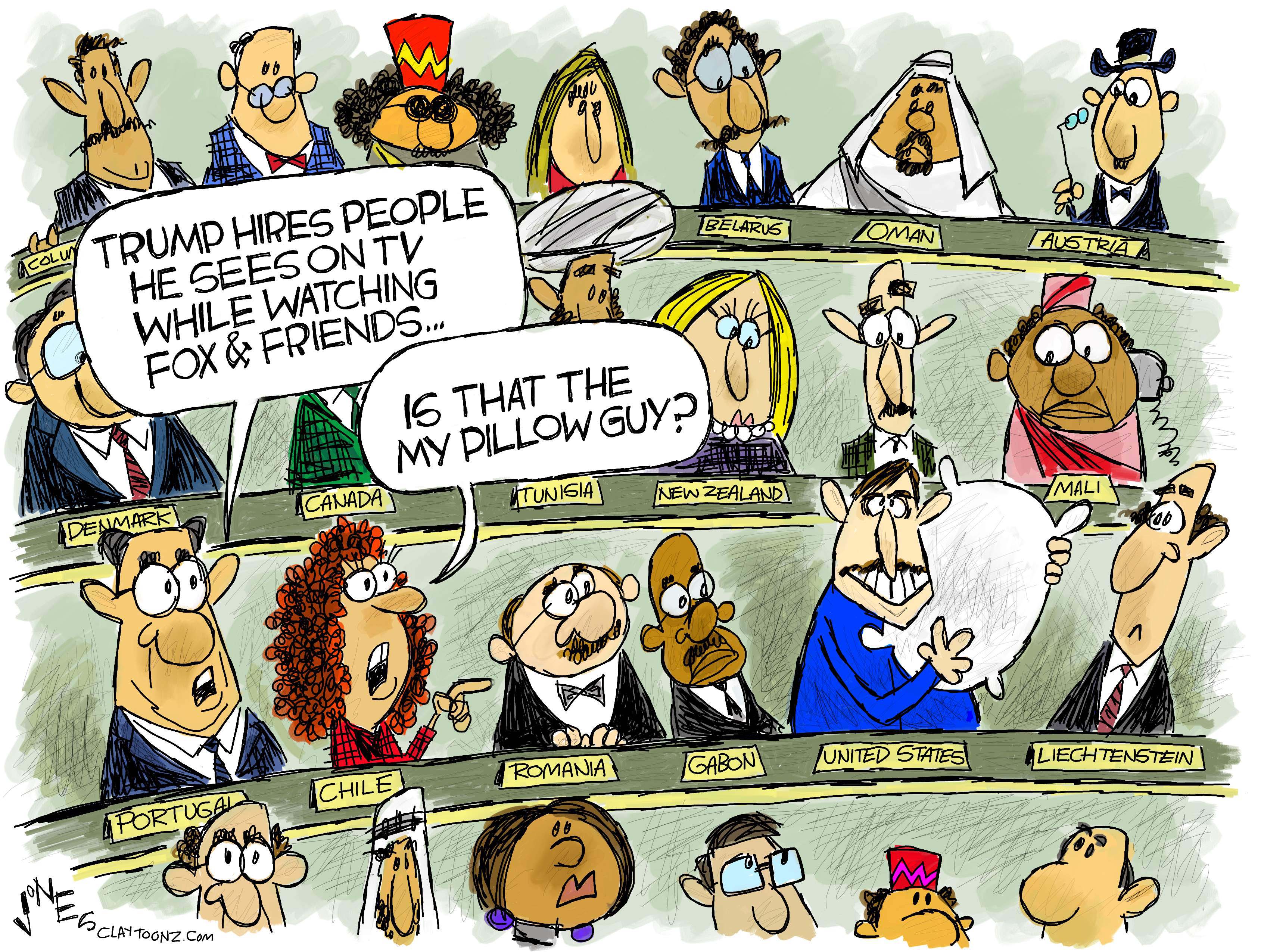 Trump watches a lot of TV, specifically Fox & Friends. Morning schedules at the White House list the time block occupied by Trump’s favorite TV sycophants as “Executive Time.” Nothing else is scheduled in the mornings so Trump can watch his friends, and that’s probably not a terrible thing.

In addition to Bolton, he hired conspiracy theorist Joseph diGenova from Trump TV for his legal team before backtracking (sometimes you should actually meet the people first).  He’ll stray and hire from other networks too. Interim Attorney General Mathew Whitaker was an occasional guest on CNN bashing Robert Mueller, and Larry Kudlow was a CNBC contributor before becoming director of the National Economic Council.

Going on Fox News is like auditioning for a job in the Trump administration. Sean Hannity would probably be under consideration to replace John Kelly as Chief of Staff if he wasn’t already Trump’s top political adviser.

Now, Trump is moving Heather Nauert from her position as spokesperson for the State Department to replace Nikki Haley as ambassador to the United Nations. Guess where Heather Nauert worked before Trump hired her? I’m only asking because if you read this blog then you probably don’t watch a lot of Fox News.

Nauert impressed Trump at the State Department, especially that time she used D-Day as an example of our warm relationship with Germany. I’m not kidding. But, why should Trump’s hires have any actual experience with the jobs he’s putting them in when he doesn’t have any himself? Quite frankly, he might as well have picked the My Pillow guy.

The My Pillow guy is Mike Lindell. Like Trump, he’s a pitchman. He built his company on infomercials which is pretty much what Trump’s time at the White House has been. Trump’s spokesgoons have hawked Trump products, the state department website has advertised his crap, and every weekend gives free promotion to a Trump resort.

Another thing Lindell has in common with Trump, other than creeping me out on TV, is that his products don’t meet his promises.

I’ll give Lindell credit for overcoming a serious drug problem to create a company that makes American products, even if it’s a shitty one (Amazon reviewers describe it as lumpy, crunchy-sounding, and as a bag full of chopped-up foam). Good for him. But, you can’t claim it treats fibromyalgia, restless leg syndrome, sleep apnea, cerebral palsy, and acid reflux, among others. About the only thing he didn’t promise was a four-hour erection. The company had to pay around a million dollars after being sued by several counties in California. The Better Business Bureau also lowered the company’s ratings from an A+ to an F because of their buy one, get one free offer. The pillows are fifty bucks, but if you buy two for $100 then you’re getting that second for free. Does that make sense? Just sell the pillows for fifty bucks, dude and stop screwing with sleep-kicky old people who watch Fox.

Lindell is also a big Trump supporter and has gotten to hang out with him at Mar-a-Lago. Does Cheeto dust wash off the pillow? He also likes Laura Ingraham, whose only reason for not using My Pillow is because she sleeps upside down.  When advertisers were dropping her show after she made disparaging remarks toward school-shooting survivor David Hogg, My Pillow increased their advertising on her show by 62 percent. Basically, what you’re buying are hate pillows.

Trump told us he would hire the best and brightest. Later, he claims his former employees are stupid or weak, like Michael Cohen, Rex Tillerson, Jeff Sessions, and Omarosa. Later, he’ll say that he hired them out of sympathy. I don’t recall that on the campaign trail. You would think Attorney General would be too important for a sympathy job, but Trump treats it the same as letting that kid cut the White House grass. Did I see that kid on Fox & Friends?

The My Pillow Guy and his crunchy/lumpy pillow would fit right into this administration of grifters. Just beware of how Trump talks about his former hires.

Side note: I just hope you appreciate all the My Pillow ads I’m going to get now. And, if you see them on this site, sorry about that. It’s the algorithms. Don’t email me bitching about it. 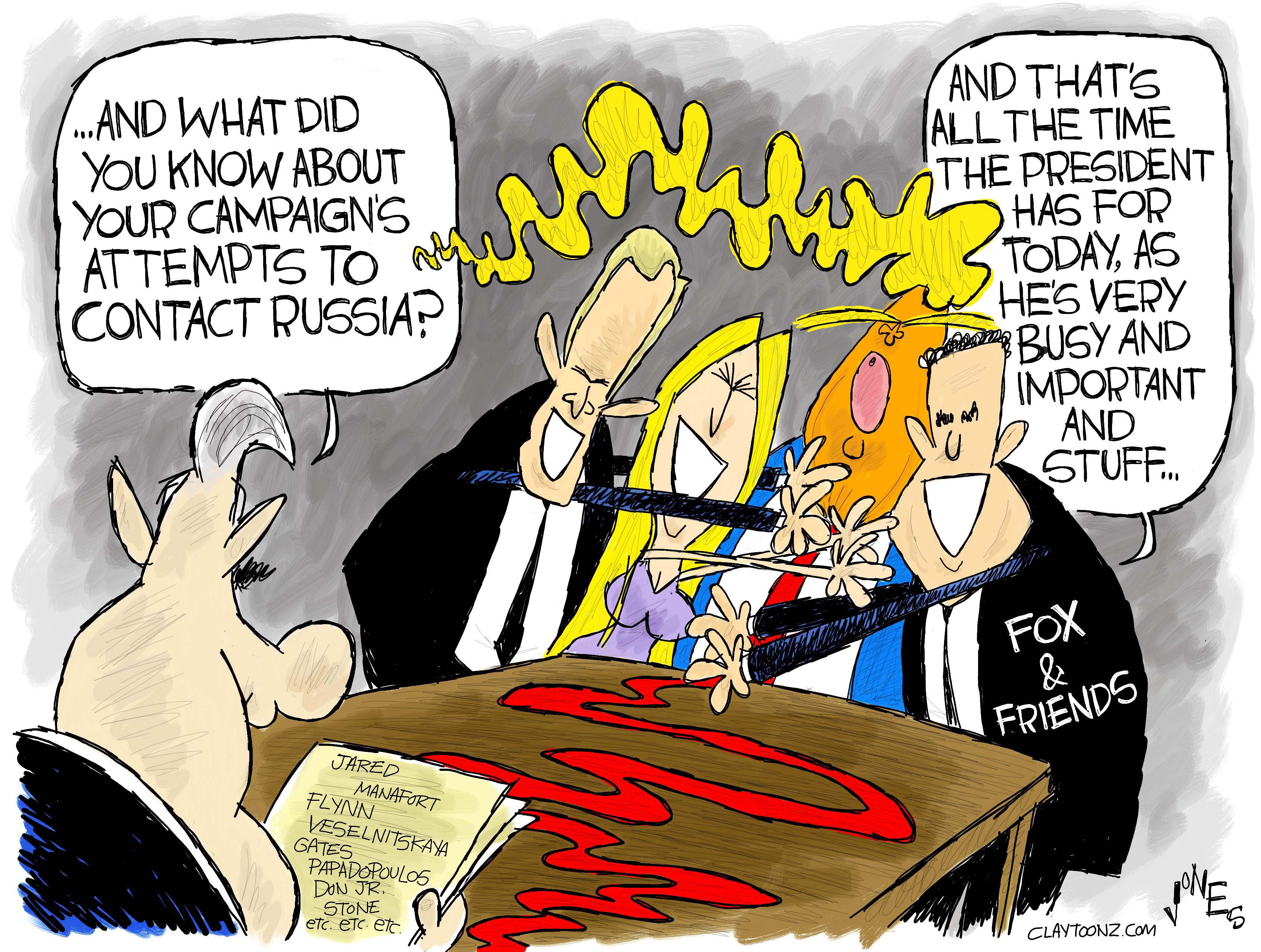 Trump’s lawyers are afraid to let him talk to Special Counsel Robert Mueller. In fact, they actually received a list of questions Mueller wants to ask, and they still don’t want him to testify. They’re afraid of a perjury trap, but how is it a perjury trap when you have the questions beforehand allowing you to practice your lies?

There are no perjury traps. There’s just perjury. You couldn’t ask Trump for his favorite snow cone flavor without him lying.

And, that’s the thing. Donald Trump is a walking, bleeding case of a bunch of perjuries. They’re afraid of him talking to the FBI, the Justice Department, and Mueller? Donald Trump can’t talk to Fox & Friends without destroying his presidency.

The good thing for Trump is that Fox & Friends are actually Fox & Flunkies. They practically hung up on Trump so he’d stop talking and cutting his own throat.

Former Secretary of State Rex Tillerson called Trump a “fucking moron,” and according to reports that rely on eight current and former White House sources, Chief of Staff John Kelly has referred to Trump as an idiot. If you can watch Fox & Friends, or read Trump’s tweets, or listen to him speak on any subject, and not believe he’s an idiot or a fucking moron, you have successfully been gas-lighted.

Trump complained about the “idiot” comment, calling it “fake news.” Yet, in the two tweets he sent complaining about it, he didn’t mention Kelly. He also complained about the leak of Mueller’s questions. The real question is; who leaked it? The White House leaked it which is the same place where NBC got the sources for Kelly’s comments. The White House is a sieve. Did new Trump lawyer Rudy Giuliani do the leaking?

Mueller’s list contains dozens of questions that he probably already has the answers to. The lies Trump gives for each of these questions will more than likely create new questions. One interesting question concerns Manafort attempting to contact Russia for help in the election. Previously, we were led to believe that Russia was the one attempting contact. Trump and his sycophants say there’s no evidence of collusion with Russia. The problem with that argument is that they don’t know what Mueller knows. Another problem is it may not be as much of a collusion as it is a conspiracy.

Trump would rather be a Chatty Cathy in the friendly environs of Fox & Friends instead of talking to Mueller’s team. The gang of stupids over at Fox aren’t as much journalists as they are Trump enablers and defenders. When Trump’s rant started to destroy his legal defense the Fox team hurriedly got him off the air, even though Trump was still ranting. As a Slate headline read; Old Man Yells At Country.

The old man is about to yell himself out of the presidency and potentially into prison. I agree with Stormy Daniels’ lawyer and wish that Trump would call Fox & Friends everyday. I’m sure Robert Mueller will be watching. 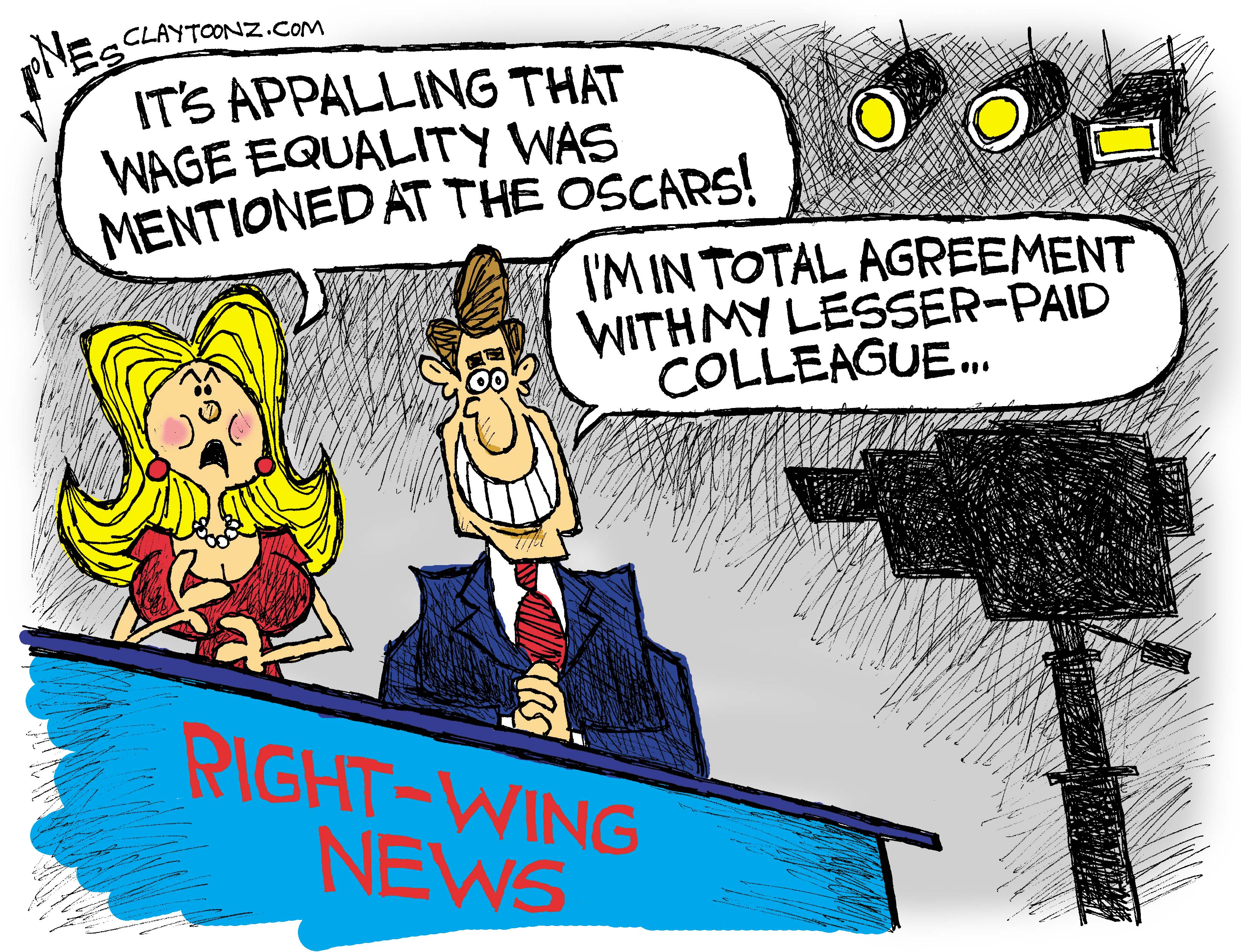