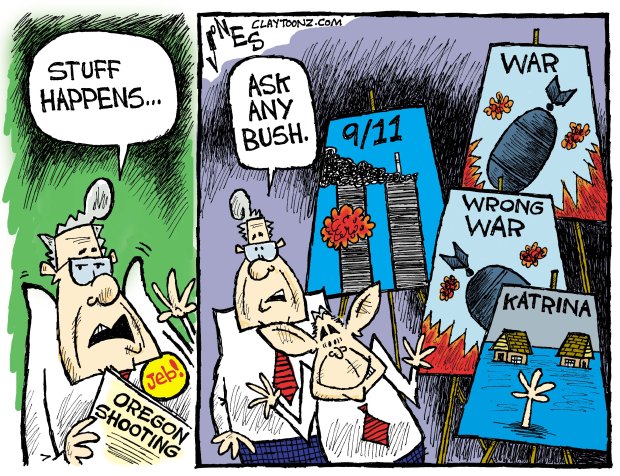 Jeb Bush’s reaction to the mass shooting in Oregon was “stuff happens.” Afterward he said his quote was taken out of context. The presidential candidate’s actual quote is: “We’re in a difficult time in our country and I don’t think that more government is necessarily the answer to this. I think we need to reconnect ourselves with everybody else. It’s just, it’s very sad to see. But I resist the notion — and I did, I had this, this challenge as governor, because we have, look, stuff happens, there’s always a crisis and the impulse is always to do something and it’s not necessarily the right thing to do.” So doing something is not necessarily the right thing to do. I’m glad we set the context straight here. He’s playing to the gun lobby and conservative voters. Those who believe there should not be anymore regulations on firearms and that we probably need more guns in society (because that’s been working out so well so far). Do nothing. Shrug shoulders. What exactly does this guy plan to do if elected? I know if he becomes president a lot of people will be saying something “happens.” It will start with an “S” but it won’t be “stuff.”

This was my second idea. I had my first idea all day Tuesday but I held of drawing it because I was afraid it might be obvious and another cartoonist would draw it. Actually I felt one particular cartoonist would draw it. I’m not psychic. Maybe it’s because I’ve been a fan of his for over 25 years and we both think weird. Yes, he drew a variation on it and I think it was better than my original idea. Here it is. 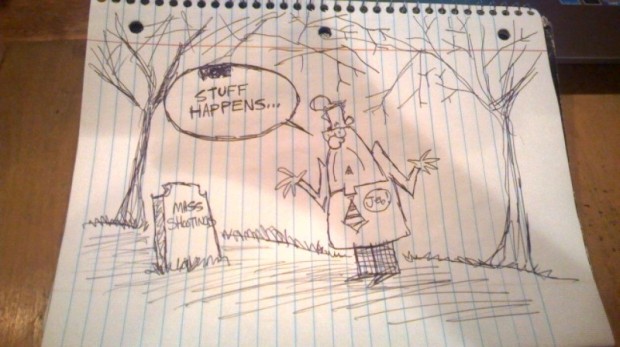 Another mass shooting at another school. The president is tired of making speeches about these things. I’m getting tired of drawing cartoons about it but I’m not a politician who will ignore it, or offer condolences and not action.

An editor at one my client newspapers graduated from Umpqua Community College in Oregon, where the latest shooting took place Thursday. I know he’s having a hard time this week. These shootings have come close to home in Virginia for me. Someone mentioned that people may have to know someone affected by gun violence before they’ll make any efforts to end this insanity. At this rate, everyone will be touched soon enough.