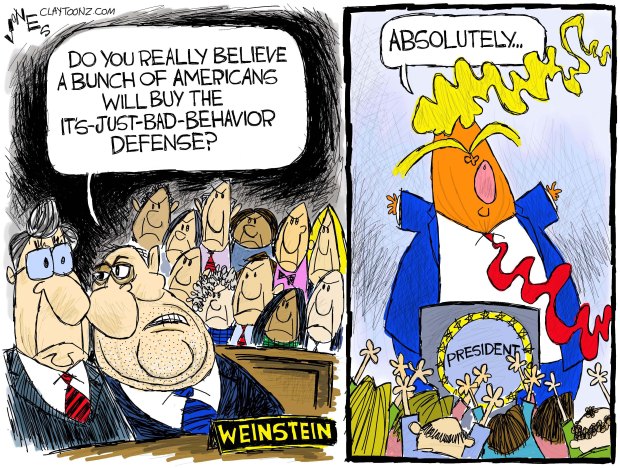 Hollywood mogul Harvey Weinstein did not get the Hollywood red-carpet treatment when he entered a New York City courthouse to face charges of raping one woman and forcing another to perform oral sex. Instead, he entered wearing handcuffs. Three pairs in fact, because he’s kind of a big guy.

It was being a big guy that allowed Weinstein to get away with harassing, assaulting, and intimidating women for decades. Decades of using his wealth and power to force women to submit to him, and destroyed the careers of those who wouldn’t. He’d often coerce or buy silence, and even employed an Israeli security firm to collect information on his accusers. Over 90 women have accused him of harassment and assault. While a few of his accusers are famous, many are not, and maybe it’s because of Weinstein why they’re not.

But it was the famous that finally brought the accusations out from being just rumors and whispers in Hollywood, to public exposure, to eventual criminal charges. It spawned the #MeToo movement which has brought to light harassment and assaults from other famous men.

Other famous men like Bill Cosby, who will now be going to prison. I’m sure Weinstein has Cosby in mind as he prepares his defense.

Weinstein is out on $1 million bail and has been extended the luxury of traveling between his homes in New York City and Connecticut, although with an ankle monitoring bracelet. He’s also surrendered his passport, so he won’t be able to flee the country.

Weinstein may not ever see the inside of a prison, even if all the criminal accusations are true. His legal team is preparing a defense admitting his bad behavior, which they say is not criminal or on trial. Will it work? Ask Donald Trump.

This is a nation that disregarded numerous horrible traits of Trump while putting him in the White House. Trump has been accused by nearly 20 women and has bought the silence of others. The number of those paid off is only known by Trump and his lawyer/fixer, Michael Cohen. Weinstein’s lawyers will be seeking people to put on a jury who will disregard bad behavior.

Perhaps his lawyer’s first question to potential jurors will be, “did you vote for Donald Trump?”

Thank you for your support. Reader contributions, small and large, really do help and are appreciated in a time of dwindling revenue for political cartoonists. You will also be supporting free speech and the First Amendment, and independent journalism while those in power are doing all they can to suppress it. You can also support by purchasing a signed print for $40.00. Just look at the right of this page and click the PayPal button, or you can email and make other arrangements. Thank you!

Rob Porter is the staff secretary for the White House, a title that downplays the significance of the position.

The staff secretary is really the assistant to the chief of staff, which makes him a gatekeeper to the Oval Office, who gets to see the president, and what information gets to the president. Porter even had a hand in crafting the State of the Union address, which might explain why it was so slappy.

Porter resigned Wednesday after a British tabloid, the Daily Mail, brought to light accusations that he was emotionally and physically abusive to his ex-wives. That’s not a typo. Wives. Plural. He gave one a black eye and the other obtained an emergency protective order against him after he broke into her home.

Par for the course for this White House, they didn’t care and tried to downplay it. They knew about the accusations for over year, as both of his exes told the FBI in January 2017 of the allegations while they were being interviewed for Porter’s security clearance. Porter has not had a security clearance in all this time, much like Jared Kushner and Sebastian Gorka (before he resigned and is an international fugitive).

Trump himself has been accused of violence by his first wife who later retracted her claim. This in addition to over a dozen accusations of him sexually assaulting women along with his boasting about groping women without asking and barging into dressing rooms full of naked teenage girls.

Kelly even tried to talk Porter into staying, telling him these accusations shouldn’t be taken seriously. Kelly, once thought of as a moderating presence who was cheered by many when he took the job, has turned into one big disappointment. It worked for a day as Porter decided not to leave until a photo emerged of one of his exes’ black eye.

Typical for Republicans, Utah Senator Orrin Hatch defended Porter until the photo showed up. Hatch didn’t have all the details before he commented, much like the entire party was with the FISA memo. Orrin went from “It’s incredibly discouraging to see such a vile attack on such a decent man,” to “I am heartbroken by today’s allegations.” Heartbroken, I’m sure, that it got out.

Porter is also dating Hope Hicks, who went from being a fashion model to helping Ivanka sell clothing made by children in third-world countries, to doing whatever the hell her job is for Donald Trump. It’s not surprising that a woman will help a vulgar man like Donald Trump push his agenda would get all dreamy eyed for the likes of a Rob Porter.

Why any woman would want to advocate and vote for the Trump agenda is befuddling. You would think anyone who voted for Trump would see through the lies and broken promises as “clean” coal is not coming back and Mexico is not paying for the wall. You’re paying for the wall and Trump is willing to shut down the government until you do.

White women, in particular, got it bad when it comes to Trump. White women in Alabama even supported Roy Moore. It’s puzzling that these women don’t believe the numerous sexual allegations against these men despite very convincing evidence and Trump’s own admittance to assaulting women. It continues to baffle me how anyone, especially women, can believe Hillary Clinton is dishonest while they support Trump.

I will never understand why a woman will stay in an abusive relationship. The one you’re in now, white women, will never treat you right.

Ivanka Trump has such grace, such beauty, such poise. Why she could be a model…for nepotism.

Her presence in the White House was reasoned by her being a rational and sobering influence upon her father, which is an admittance that he’s freaking insane. She has openly discussed how she would be an advocate for women’s issues, especially pay equity. HAHAHAHAHA!!!!

Ivanka’s promise of being an advocate for women has gone the way of Melania’s anti-online bullying campaign. It would be like Michelle Obama promoting eating vegetables while sitting in bed eating cheeseburgers every night.

Ivanka and Melania were both silent over accusations from 19 women of Trump’s sexual harassment, and his boasting of “grabbing pussy,” except when they have defended Trump for it. Ivanka was silent when Trump went after Mika Brzezinski’s looks and criticizing her for cosmetic surgery, which I’m sure, is totally foreign to the Trump family. She was silent when Trump tweeted that New York Senator Kirsten Gillibrand would do anything for money. She has been silent every time Trump has racially thumped Massachusetts Senator Elizabeth Warren by calling her “Pocahontas.” She was silent when Trump went after Carmen Yulin Cruz, the female mayor of San Juan, or the Congresswoman Frederica Wilson and a war widow. She’s also made no remarks on reports that Trump requires women in the White House to “dress like women,” whatever that means.

She has not promoted equal pay or taken her father to task for taking healthcare away from women and threatening reproductive rights. He likes to grab ’em and legislate ’em.

Maybe, the very worst of this is her silence after Daddy Dumbass endorsed Roy Moore. Ivanka tweeted that there’s a special place in Hell for people who prey on children, but her strong position evaporated after the cheeseburger-loving Cheeto endorsed the pedophile.

After Oprah Winfrey drew praise for her speech at the Golden Globes, standing up for women and denouncing sexual harassment and assaults, Ivanka decided to jump on the bandwagon.

Straight from the department of Are You Freaking Kidding Me, Ivanka tweeted, “Just saw @Oprah‘s empowering & inspiring speech at last night’s #GoldenGlobes. Let’s all come together, women & men, & say #TIMESUP.”

Time’s up? You’re late to the party. You don’t have a freaking clue what time it is. “Let’s all come together?” Come together and do what? Sit silently when Daddy attacks another woman?

Ivanka standing up for empowering women has as much credibility as Sebastian Gorka in a pussy hat. She has more “togetherness” with the propaganda ministers, Sarah Huckabee Sanders and Stephen Baby Goebbels Miller. The only hashtag President Daddy’s little million dollar princess should be sending out is #complicit.

Ivanka needs to leave the White House and end the ruse she’s perpetuating that she’s actually serving a purpose. With that, we can say “time’s up.”