If you’re out there defending Donald Trump from accusations that he’s a racist, and you really believe he’s not racist, the feelings are not mutual because Donald Trump believes you’re a racist.

Donald Trump believes that you are so racist, that throwing out racist dog whistles so loud that cats can hear them, will strengthen your support of him. In fact, he’s counting on it. Trump’s 2020 election strategy is to win by receiving the white vote and only the white vote. With this strategy, he’s counting on white America to be as racist as he is.

Yesterday, a Trump supporter mocked the media for figuring out the “code” he uses when he attacks people of color. The code is using the word “infest.” But with a simpleton like Trump, it wasn’t a difficult code to crack.

Another code you don’t need the Enigma crackers for is his response to massacres. His response to the mass shooting in Gilroy, California that left three dead (two of them minors) and injured 12 is a perfect example. While he tweeted out condolences and “we must stop evil,” he didn’t identify the incident as terrorism or the shooter as a white supremacist (I took artistic license with that detail in the cartoon). He never does that when the shooter is white or a racist. He’s afraid of offending his base of white supremacists. Hell, the guy couldn’t even disavow David Duke. Trump has argued in the past that he didn’t identify the shooter’s beliefs and motivations because he doesn’t have all the information. It’s hard to “stop evil” when you refuse to identify it.

When MS-13 murders someone, Trump quickly identifies them as such and uses it for his stupid, racist vanity project in the form of a border wall argument.

When a gunman killed 50 worshippers in two mosques in New Zealand, it took days for Trump to issue any comment, with his first tweet casting himself as the victim. He tweeted that the media was “working overtime to blame me for the horrible attack in New Zealand.” What Trump failed to do was express condolences to the Muslim community or acknowledge the gunman was a fan of his. The shooter used Trump’s term “invader” to describe immigrants and wrote that Trump was a “symbol of renewed white identity and common purpose.”

Trump supporters would rather be lackeys for their dear leader than to have any independence or dignity. And, don’t expect any of them to speak out against Trump for assuming they’re as racist as he is, even if they were smart enough to detect it.

On Sunday evening, Trump was attacking black Americans through Twitter, even accusing Congressman Elijah Cummings of being a racist. He paused to comment on the shooting at Gilroy. Shortly afterward, he resumed attacking black Americans, this time calling Al Sharpton a “troublemaker” (there’s another racist codeword against blacks), a “con man” and that he “hates whites and cops.”

Al Sharpton may have issued the best retort to Trump we’ve seen all year. Sharpton said, “If he really thought I was a con man he would want me in his cabinet.”

If Trump was presidential, he would have taken at least one day off from being divisive, attacking fellow Americans, and telling his white supporters that black leaders hate them. A real president would respond to the need of unifying the nation, not engage in further divisiveness. But, it’s hard to be presidential when you’re a racist. For his supporters, it’s hard to spot racism when you’re racist.

Donald Trump is fostering hate in this nation and hoping the divisiveness wins him a second term. He says, “We must stop evil.” If he really wanted to stop evil, he’d submit his resignation and leave the White House. 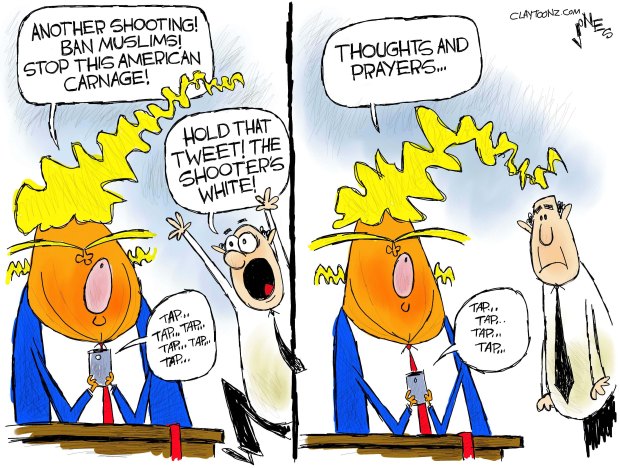 I’m too exasperated over this happening again and again to columnize about it today. What else is there to say about it anyway? You know the drill. Brown guy, we gotta change policy with something racist. White guy, thoughts and prayers.

The thoughts-and-prayers people are totally thoughtless.