One aspect of the Olympics I always enjoy are the individual issues. Fiji won their first medal ever in their history of competing at the Olympics and the country was excited that even banks were closed during the event. An Egyptian lost to an Israeli in judo and refused to bow or shake his hand. The U.S. women’s soccer team was upset by Sweden and Hope Solo called their opponents “cowards.” Officials had to reschedule an event because the water in a pool was too nasty (I don’t think that was a Baby Ruth). That’s fun stuff.

Here in the U.S. everyone is talking about Michael Phelps and his history-making medal grab.

These are his fifth Olympics and even editorial cartoonists are drawing positive celebratory cartoons honoring him. I don’t play that. I wouldn’t be able to stomach drawing cartoons of jealous fish and a jealous Aquaman. Ugh!

The media has been so gaga over Phelps that the San Jose Mercury News stepped all over itself in reporting the accomplishments of another athlete.

Simone Manuel became the first African-American woman to win an individual swimming event at the games when she took joint first place  in the 100-meter freestyle at Rio 2016. The Mercury News placed a headline on their website which read: Michael Phelps shares historic night with African-American.

Yikes! Forget shes’ a person, has a name, earned a little praise all her own, and let’s just lament how Phelps has to share a little glory with a black girl.

Women have been kinda trampled on with the sexism at these games.

Gymnast Simone Biles (who has been incredible) was complimented by an NBC commentator with “I think she might even go higher than some of the men.” Apparently you can’t appreciate a female athlete’s ability without it being compared to men for perspective. This was heaped on top after one commentator said her adoptive parents are not her parents. That’s some serious stupidity.

The Chicago Tribune labeled two-time bronze medal-winning Corey Cogdell as “wife of a Chicago Bear’s lineman.” The paper had to refer to her as a wife, and didn’t matter which particular lineman’s wife….just that she was a wife. You haven’t seen Phelp’s girlfriend mentioned in any headlines.

Katy Ledecky broke a world record in the 400-meter freestyle and was given praise with: “Some people say she swims like a man.” That was once again given by someone at NBC. Maybe the network should have sent Rachel Maddow or Chris Hayes to cover the games. Sheesh!

Hungary’s Katinka Hosszu broke a world record in 400-meter individual medley (whatever that is) and the credit was given to her husband/coach. Again…NBC.

NBC, who is on a roll by at this point, referenced the cycling teams as “mens” and “girls.” Do I have to point it out?

While the U.S. gymnastics team was talking on the sidelines, NBC again, said “They might as well be standing around at the mall.” When the men are talking to each other where might as well could they be standing? A bar? Garage? Pool hall? A crotch scratching contest?

NBC explained their tape delay by saying it’s OK because most of their audience is women and they’re more into the reality TV aspect than the results.

A lot of people will say I’m being too politically correct over this. I don’t think so. I try to keep this stuff in mind and I’m sure I’ll stumble in this area in the future. We have a very sexist society to the point that most people aren’t even aware they’re doing it.

For example: Hillary Clinton shouts but you don’t hear anyone talk about Donald Trump shouting. Conservatives make jokes about Clinton’s physical appearance, yet for a man to be insulted for his looks he has to have a serious weight issue or extremely ridiculous hair that defies physics. I was out last week and heard two guys talk about Clinton’s age without being aware that Donald Trump is older. A lot of people are asking to see a report on Clinton’s health but not Trump’s (and there’s one person who could use a brain scan it’s Trump). I’m surprised we haven’t started about menopause yet.

We have another week of the Olympics and at some point I hope to start watching. Maybe the rest of the media should pay closer attention also…or just let Roger Ailes produce the event. 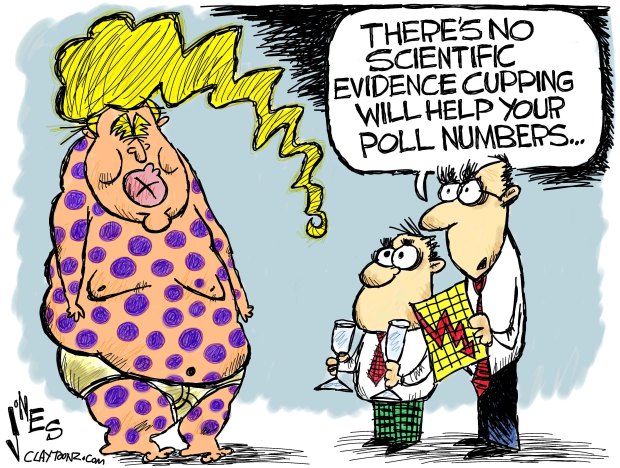 Until yesterday I had never heard of the term “cupping.” At least not in this context. Then 19-times Olympic gold medalist Michael Phelps showed up at the Rio Olympics with purple dots all over his body. The entire universe started wondering what was up.

The purple dots are the result of cupping which is Chinese therapy that’s been around for thousands of years. The purpose is to relieve sore muscles. The process involves heated cups placed on the skin, often attached to a sucking machine. It pulls the skin inside the cup and leaves a great big bruise. Basically it’s giving yourself a hickey with a vacuum cleaner.

There’s no scientific evidence that it actually provides any benefit, but if it’s in a user’s head, they’ll swear by it. No word yet on if any of the athletes have resorted to using leeches. That’s been around thousands of years too.

Donald Trump is falling further behind in the polls. Apparently being stupid, insane, and insulting war mothers doesn’t inspire people to want to vote for you. Go figure. I’m sure the entire system is rigged against out of touch billionaires who make stupid and racist comments.

Trump released an economic plan on Monday that will probably have less of an effect on lifting his polls than cupping.

There are dumber things than cupping. Voting for Trump is one of them.

A lot of people don’t really understand irony. Alanis Morissette didn’t understand it when she released that stupid song “Ironic” back in the 1990s as most of the examples of irony weren’t ironic at all. But I forgive her to a certain extent because a song titled “coincidence” probably wouldn’t have captured the angst of the 90s. So when the United States won its very first Gold medal of the 2016 Olympics a lot of people pointed out the irony of it since it was for shooting and the U.S. is the most gun crazy nation on the planet. Coincidence. Not irony.

What would be ironic would be if Australia had won their first gold for shooting since they enacted very stiff gun control measures which ended gun deaths across their entire nation. Or would that be a coincidence too? Dammit, now I’m confused. Damn you, Alanis!

But anwyay, for the U.S. to win gold for shooting a gun it’s more of a duh. Of course we won for shooting. We love guns. We have more of them than anyone and we lead the modern world in shooting each other.

We don’t really lead the world in gun deaths per capita. There are nations in Africa, the Middle East, Southeast Asia, and Central and South America that beat us. To be fair, if the U.S. had tarantulas the size of those in Central America I’d buy a gun too. But none of those nations are wealthy, industrial or modernized. We lead the world among nations that have healthcare, factories, roads, streets, sidewalks, education systems, showers, and governments that aren’t constantly overthrowing themselves.

If you compare us to Japan, Canada, or any nation in Western Europe, we give the impression that we’re a bunch of gun yahoos who are extremely stupid for guns. That’s a terrible image to have but unfortunately it’s true. Despite every fact, statistic and evidence right before our very eyes that more guns equals more mass shootings, gun suicides, and accidental gun deaths, we keep pumping more guns into our nation. So yeah, we’re stupid about guns.

I don’t really get proud of our nation’s Olympic prowess. I feel pride for certain athletes, sometimes those of other nations. But the U.S. send the most athletes to the Olympics so of course we win the most medals. We sent 554 athletes to Brazil. Brazil didn’t send that many athletes to Brazil. And who can blame them? It’s dangerous down there. What with Zika, sewage, muggings, topless women on the beach. It sounds terrible.

I am proud for our first gold medal as it was won by a Virginian, 19-year-old Ginny Thrasher, which we can all agree is an awesome name. And Ginny couldn’t have picked a better week to give our state something to brag about because the only other thing to happen for us last week was a monkey attack in Virginia Beach (that might be ironic since it didn’t happen in Brazil…or Florida). Thrasher took gold for shooting an air rifle in 10 millimeter shooting. So no, she wasn’t using an Uzi.

As I was writing this I had my television on one of those channels that plays music and sure enough, “Ironic” came on. Now that was a coincidence.