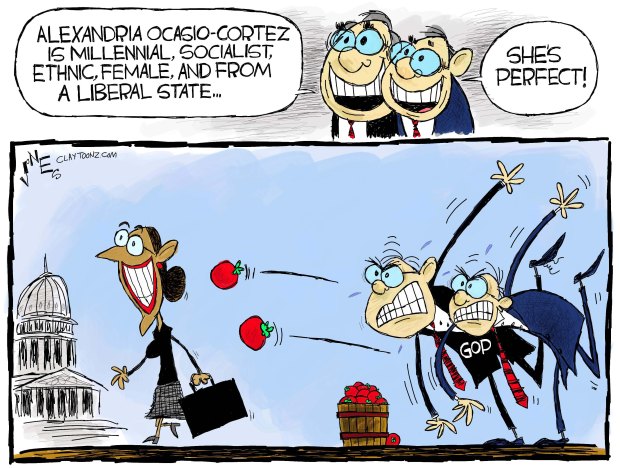 The only thing Republicans fear and hate more than a liberal old white woman is a young brown one.

The GOP has been bashing Hillary Clinton since 1992. They’ve gaslighted the nation to the point that most people who hate Clinton can’t state anything factual to hate her over. They’ve been at Nancy Pelosi since the Bush 43 era and argue she’s too old to be Speaker of the House, despite the fact their Senate Majority leader is only two years younger. Elizabeth Warren is a fairly new target for them, but they can’t go at her without exhibiting racism. I’ll give you one guess why they hate Maxine Waters.

Maybe they’re getting bored with the women listed above because they’ve recently taken to attacking Alexandria Ocasio-Cortez, who will be the youngest member in the history of the House of Representatives when she assumes office in January. Ocasio-Cortez defeated Democratic Caucus Chair Joe Crowley in a primary and will represent a district that covers parts of Queens and the Bronx.

Ocasio-Cortez has everything Republicans need to hate. First off, she’s a she. We know how Republicans feel about women. She’s a self-described Democratic-Socialist, which really freaks out people who equate that with Venezuela instead of Norway. She’s a millennial, and they hate people who resemble their constituency. Finally, she’s a minority, and…yeah. The future of America is going to be a lot browner than white and that scares the living daylights out of the GOP. They can’t gerrymander fast enough to prevent it.

With the way the GOP is trying to destroy her, you would think she was a major presidential contender or possessed the Donald Trump pee tape. A day doesn’t seem to go by without some GOP flunky going after her on Twitter or Fox News.

Ocasio-Cortez revealed her plight of being unemployed for three months before she takes office and being unable to afford an apartment in Washington. Fox News, which is made up of millionaires, mocked and derided her for lacking affordable housing options. They failed to notice that this problem truly makes her a representative of America. They also failed to mention that around 50 Republican congressmen sleep in their offices because they claim they can’t afford a D.C. apartment.

There was a scandal over her wearing nice clothes to her orientation at the capital, which was a brouhaha Washington hadn’t seen since Obama put mustard on a cheeseburger.

An editor for Daily Caller, Virginia Kruta, attended an Ocasio-Cortez rally and was petrified that the crowd was eager for healthcare, an education, and a living wage being a human right and accepting that the government has a responsibility to provide them. She wrote, “They talk about things that everybody wants, especially, like, if you are a parent.”

The Right isn’t sure how to handle her because she’s good with social media, and she fights back. A Washington Examiner columnist deleted his tweet after attacking her wardrobe.

Sean Hannity ran a segment, trying to scare his audience, listing her agenda of Medicare for all, housing as a human right, federal jobs guarantee, gun control, criminal justice reform, and end to private prisons, abolishing ICE, immigration justice, solidarity with Puerto Rico, fighting Climate Change, clean up campaign finance, higher education for all, women’s rights, and support of LGBTQ. Is Hannity bashing her or creating her campaign ads?

What they’re really afraid of is that she understands struggling in this nation and that giving more of our money to billionaires isn’t going to help the majority. She has a voice, and she knows how to use it.

When Mike Huckabee falsely accused her in a tweet of comparing her election victory to the moon landing, she hit back with, “Leave the false statements to Sarah Huckabee. She’s much better at it.”

That’s the voice of reason and understanding that scares Republicans. Hopefully, in their fear and hysteria, they’ll keep pointing it out. If she’s kicking their asses at 29, imagine what she’s going to do after she gains some experience.

What should scare them most of all is that Alexandria Ocasio-Cortez is the future, and she’s not alone.

Johnson, who previously impersonated a deer in headlights when asked about Aleppo, was asked to name a current foreign leader he admires. He couldn’t name one. Not because he doesn’t admire one but because he can’t name any foreign leaders. He said he liked the guy who used to run Mexico but couldn’t name him. His running mate William Weld threw him a lifeline and said Angela Merkel.

Hillary Clinton is struggling with the youth vote. Millennials overwhelmingly wanted Bernie Sanders and now many of them are throwing in with Gary Johnson. They may be feeling the Johnson right now but if Trump wins they’re not going to like where they’re feeling it.

The Libertarian platform has zero interest in Civil Rights. No plan regarding government regulations of large, unsustainable financial institutions that have nearly destroyed the economy. Anything on Global Warming or Climate Change? Nope. Libertarians are OK with abortion but their ideology dictates that employers should be able to control whether or not their employees’ insurance polices cover contraceptive healthcare. Johnson believe in Gay Rights but doesn’t think the government should protect victims of wrongful employment termination.

Libertarians are in favor of small government. They think it’s OK if you smoke weed, pay for sex, get married, or how you control your own body and the federal government should stay out of it. But they’re just fine if the state government tells you to put out the blunt, who you can’t marry, or if you can dangle your goodies for cash. That’s their vision of State’s Rights. So if a state wants to discriminate they’re fine with it as long as it’s not the federal government.

In 2010 when Arizona passed a law authorizing the discrimination of brown people Mr. Johnson argued that the federal government should stay out of it. Racism and xenophobia isn’t good on a federal level but as a state issue it rocks according to the Libertarians.

Johnson also wants to abolish income and corporate taxes. He’s against gun regulations. He opposes unions. He believes Medicare and Medicaid funds should be distributed to states as block grants. He wants to privatize social security. He also wants to abolish the department of education. He’d name more if he knew what they were.

Bernie Sanders attracted youth voters who support Civil Rights and believ in Black Lives Matter. His supporters are Pro Choice. They want the government to fight Climate Change. They want to regulate Wall Street. Bernie was a big proponent of raising the minimum wage, as is Hillary which most millennials also strongly support. Johnson wants to eliminate the minimum wage. Most of all the young want free college. Gary Johnson doesn’t even have a tuition plan, which kinda makes sense when you ask him a question.

Johnson doesn’t really know much. He doesn’t have any interest in foreign policy. He doesn’t know where Aleppo is, what it is, or what it’s about. He can’t name a foreign leader but he knows the guy he used to be able to name doesn’t run Mexico anymore.  Maybe it’s Santa Anna. His latest gaffe won’t make much of a difference to his supporters as they haven’t looked into his positions yet. At least Trump supporters are aware their candidate is a racist. Most Gary Johnson supporters couldn’t pick him out of a bong party.

Bernie and Gary both believe weed should be legal. But outside of that what exactly do all those millennials believe in if they’re going from Sanders to Johnson? For months they amassed in huge rallies to support Sanders and their issues and now they’re telling us they don’t have principles. Were they were faking it?

I understand the outsider thing. I understand not being crazy about either major party or Hillary Clinton. But you dislike Clinton so much, despite her supporting most of your issues, that you’ll give us an oligarchy under a President Trump? The man who wants to be America’s Saddam Hussein? With all due respect, you are all idiots.

Gary Johnson is basically a Tea Party guy with a full set of teeth and without the racism, but will turn a blind eye to it, and who supports weed. I’d also make a pitch here to Jill Stein’s supporters but they’re probably not on the internet since they believe Wi-Fi causes brain damage.

So how does Clinton get the youth vote back? How does she make them like her? Does she have to play Pokemon Go? Get a selfie stick and start posting to Intagram? Start playing EDM at her rallies (look it up. I had to)? Get one of those god-awful chest tattoos girls think are attractive? Pierce a nipple (you’re welcome)? Nope. She should Propose making weed legal.