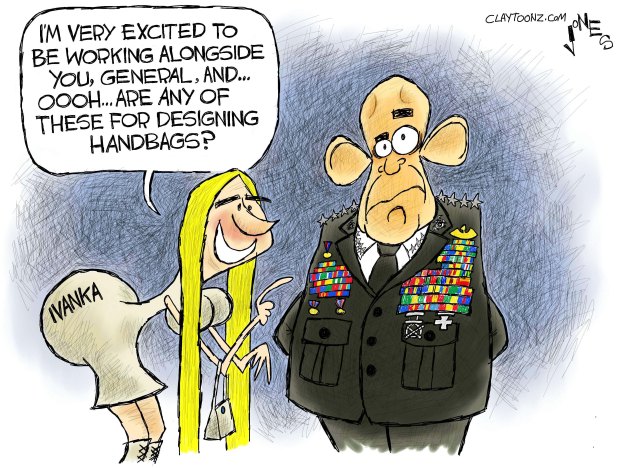 Occasionally I’ll make a sarcastic post on social media, and last week I wrote, “Ivanka Trump is excited to work “alongside” Kelly. I’m sure the GENERAL is excited to be working alongside a mediocre fashion designer.”

I also posted, “If anyone looked at me the way Mike Pence looks at Donald Trump, I’d get a restraining order.” Seriously, the guy has an expression of warm satisfaction as though he just made a boom-boom. But that’s an issue for another day.

My comment about Ivanka got a lot of responses, and it gave me this idea. I usually don’t make a post on social media that I’ll use later for a cartoon, but I thought of the cartoon after I mouthed off.

Maybe we are making too much out of Ivanka’s tweet about working “alongside” the general, but it illustrates just how absurd and ridiculous this administration conducts itself. The people Donald Trump has placed in his administration are ludicrous. The rapper Ludacris couldn’t create a more ludicrous staff than Trump.

During the campaign, I heard people say they would vote for Trump because they were pro-military. Trump often states how much he respects the military. Trump doesn’t respect anything, and his actions prove he doesn’t respect the office he holds. The man insulted a former P.O.W. and Gold Star parents. Placing his inexperienced daughter “alongside” a general is further disrespect. A highly-decorated and accomplished general supposedly shares the same status and access to the president as a fashion designer, or in Ivanka’s case, someone who pilfers designs from other designers and then has the products made by eight-year-old children in China.

President John F. Kennedy practiced nepotism when he made his brother the Attorney General, but at least in that case, you could believe Robert Kennedy could actually do the job. Other than Trump sycophants, who believes Ivanka Trump can shape or even understand policy? We can’t expect her influence to be positive as her silence after Trump’s sexist attack on Mika Brzezinski makes her complicit.

Her husband and Trump’s son-in-law is further nepotism you can’t have any faith in. The “kid” has a larger staff than the Secretary of State. Trump has placed him in charge of finding peace in the Middle East (because he’s Jewish), advising the president, reinventing government (The Office of American Innovation), being a “shadow” diplomat, solving the opioid epidemic, handling diplomacy with Mexico and China, “reimagining” Veteran Affairs, reforming the criminal justice system, and laying out the president’s clothes in the morning.

Our confidence that 36-year-old Jared can accomplish any of the above duties is undermined by his defense of meeting Russians which was, “I’m a novice to politics and I don’t have a clue what I’m doing.” How can the guy be expected to do any of those duties when he’s too busy rewriting his security clearance on a daily basis?

Even Don Jr. is in on the nepotism action, even though he’s supposed to be running the Trump Corporation and separated from what’s going on in the White House.

Everyone’s excited about General John Kelly taking over as Chief of Staff. He’s cleaning house a little by getting rid of Anthony Scaramucci and a few other people that the adults didn’t want on the National Security Council. According to reports, all briefs and information has to go through him before it reaches Trump (maybe no more breaking Breitbart news), he’s shutting the door to the Oval Office so “stragglers” won’t enter to put stupid ideas into the president’s head (though he’s capable of doing that on his own), he’s cutting off people in mid-sentence when they’re rambling, and more importantly, everyone has to go through him before meeting with the president, even Ivanka and Jared. I don’t buy that last one. Where will the General be at 8:37 PM when little princess goes up to see daddy? Can the General get Trump to stop watching Fox And Friends?

Kelly has brought structure and discipline to the Oval Office. Trump has never practiced structure, discipline, or sense in his professional or private life. He’s going to hate it and Kelly won’t last beyond six months. Besides, how much structure is he really bringing with the ilk of Steve Bannon, Stephen Miller, and Kellyanne Conway still hanging about?

You can’t shine a turd. Kelly would have more success in getting “presidential” out of a nutless monkey than he will from Donald Trump.

Creative notes: I was supposedly taking yesterday off, but I drew a cartoon in the morning. This cartoon is kind of a bonus cartoon, because I’m drawing another tonight. While I wanted to do this, I think there are a few more pressing issues I want to cover. I haven’t decided which one yet (so much fuckery).  I’m hoping between now and drawing tonight that I eat something and take a nap. 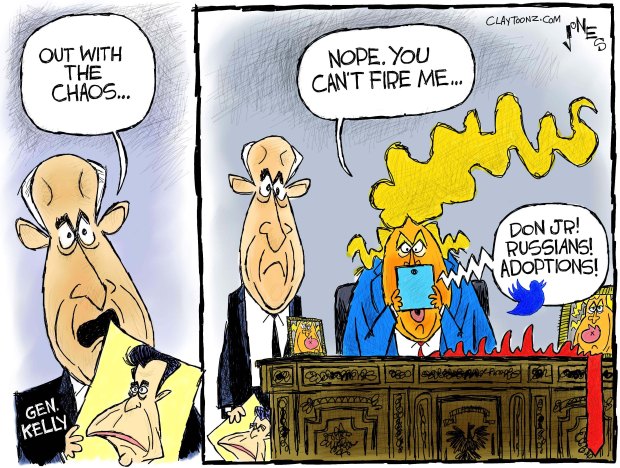 Not every individual in the Trump administration is regarded as an incompetent loon, like Rick Perry, Betsy Devos, Ben Carson, Kellyanne Conway, etc. Rex Tillerson, General James “Mad Dog” Mattis, and H.R. McMaster have entered with respect and dignity in Washington only to see it all erode under the presidency of Trump.

Tillerson has a smaller staff than Jared Kushner and the man has stood by Trump’s side when he cuddled up to Putin. Mattis has trouble explaining an administration’s policies on defense when that administration dictates those policies by tweets. H.R. McMaster has gone before the press assuring the nation that Trump didn’t spill secrets to Russians in the Oval Office, only to have Trump undercut him by confirming that he gave secrets to the Russians.

Now General John Kelly is leaving his position as Secretary of Homeland Security to replace Reince Priebus as Chief of Staff. The idea here is that the White House staff will now actually report to the Chief of Staff. What a novel concept.

Kelly’s first act on his very first day on the job was to cut out one of the many cancers in the White House and fire Anthony Scaramucci. The Mooch was shit-canned ten days after being hired for a job he had not technically even started yet.

Trump loved The Mooch’s bombastic style as it resembles Trump’s own art of fuckery and self-destruction. Trump even endorsed the chaos and infighting Moochy brought to the team and told the guy that he wouldn’t report to the Chief of Staff, and would be supervised only by Trump. With the hiring of Mooch, out went Sean Spicer and a few days later, Priebus.

According to anonymous sources within the White House, one of Kelly’s terms of taking the job was to get rid of Scaramucci. The general did not want to run an organization full of infighting and backstabbing. The White House says Trump, the “pussy grabber,” couldn’t condone the language The Mooch used in a New Yorker interview. It probably didn’t help The Mooch’s standing with Trump that he was getting more attention.

Within the last ten days, Scaramucci was hired, attacked colleagues publicly, his wife filed for divorce and then gave birth while Scaramucci was traveling with Trump. That was just a little too much Page Six for The Donald.

Now Kelly is controlling the White House staff and everyone will report to him instead of having direct access to the president….except Ivanka, Jared, probably Stephen Bannon, Stephen Miller, and Putin.

But how will Kelly control the chaos when the commander and chief of chaos is in the Oval Office? Will he uninstall the Twitter app from Trump’s phone, explain to Trump the Nuclear Triad, prevent him from endorsing police brutality, make him stop lying about crowd sizes and wiretaps, or get him to cease from obstructing justice? How will Kelly help Trump stop obsessing over Barack Obama and Hillary Clinton? What sort of shiny objects will he use to distract Trump from Robert Mueller? Can he prevent Trump from writing press releases for Don Jr. that lie about his meetings with Russians? How will Kelly reply when asked to substantiate typical Donald Trump bullshit? Will the general refuse to back up lies or will he become less prestigious than that cartoon general who sells car insurance?

General Kelly commanded troops in Iraq, which is less of a quagmire than Trump’s hair or the chaotic gunk he sprays on his face.

Now The Mooch is out and the general can conduct a White House of substance and rationality…until Kellyanne Conway takes over as Communications Director. Good luck, General!