First person to leave a comment about a little girl getting a big wiener is banned for life.

I had two ideas on Jim Comey. One was on his hit on Clinton’s campaign but then I thought that aspect wouldn’t be important after Tuesday. His negligence and fumbling will remain an issue so I went in that direction. I don’t think it matters who becomes president. Jim Comey’s career at the FBI doesn’t have a bright future. He’s managed to anger both presidential campaigns.

I had to do a lot of Googling for images while drawing this cartoon. I haven’t been inside a mall in years. I think the last time I went was when my album came out and I couldn’t talk my drummer out of buying ridiculous $200 Ray-Bans. He did get a lot of compliments that day for his Mohawk.

Reminder: I am live blogging the election tomorrow night. If you follow me on social media you know I’m prone to making a lot of snarky posts. Tomorrow expect me to spend the entire night drawing those. We’ll start around 7:00-ish  and go until whenever. Just refresh the page all night.

You know you want to want to do it. Between me and Wolf Blitzer who would you rather spend the night with? 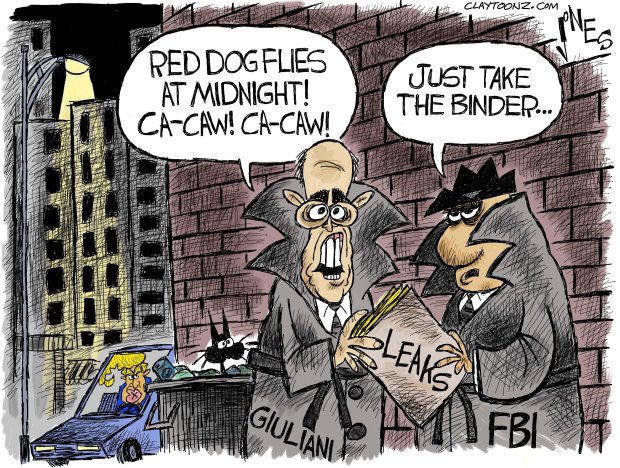 Sinister forces are attempting to manipulate this election in favor of Donald Trump and not enough people care. What’s worse is that too many people are falling for it.

While many people can’t vote for Hillary Clinton because they believe she exposed U.S. intelligence to our nation’s enemies, they’re perfectly fine with Russia supporting the Trump campaign.

While Trump and his cronies complain about a rigged system and election process, Republicans are still trying to prevent minorities from voting by limiting polling places, purging voter rolls, closing DMV’s in poorer communities where they can register to vote, and even posting fake ads on social media aimed at Democrats telling them they can vote by phone. They forget the poorly educated are Trump’s demographic.

On Thursday Eddie Munster’s lost twin Bret Baier reported on Fox News that an indictment was about to land on Clinton. By the time he apologized for his faulty reporting the Trump campaign was already off and running with the erroneous report.

Right when you think you’re still sane and the FBI aren’t going to become involved, the FBI becomes involved. Maybe they don’t want the remnants of the KGB having all the fun.

When FBI director Jim Comey sent a letter to Congress that they were looking into Clinton’s emails again because of content on Anthony Weiner’s computer many people accused the agency of trying to foil the Clinton campaign. Now it appears more complicated.

Sources are saying Comey was trying to beat a leak from within his own agency. Even though they don’t have any new information on Clinton’s emails the director felt he needed to save face. Apparently some within the FBI really don’t like Clinton and leaked the information to the Trump campaign. Comey knew it was coming. Who did they leak it to in the campaign? Mr. 9/11 himself Rudy Giuliani.

Two days before Comey sent his little tainted letter to Congress Giuliani went on Fox News, proving he can expose himself to sunlight, and with great creepy glee said the Trump campaign had “a surprise or two that you’re going to hear about in the next few days.” It took all of Rudy’s willpower not to cap the sentence off with a “bwahaha.”

Early Friday Rudy was on Fox And Friends and bragged that he knew the information was coming and said “Did I hear about it? Darn right I heard about it.” Later in the day he went on CNN, where it’s not as much of a Trump pep rally, and told Wolf Blitzer that the information was a complete surprise. Rudy hasn’t done that much twisting since that time he tried to explain to his wife why his mistress moved into Gracie Mansion.

If Clinton gave explanations like that, then retracted, there would be indictments. There’s a lot of talk about future Congressional investigations designed to harass Clinton after she’s elected president, and there will be. The investigations we really need are to look into the FBI’s attempt to meddle with an election.

And while they’re at it they need to look into Trump’s campaign coordinating with Russia.

Republicans love to chant “lock her up.” I’m really hoping for some great irony in the near future.