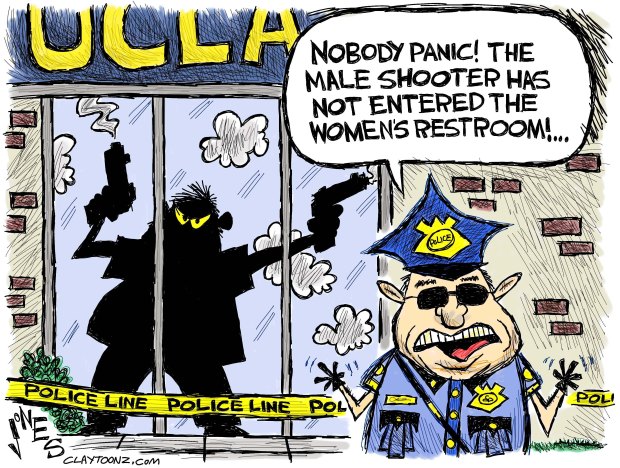 One guy attempts to smuggle a bomb in his shoe aboard an airplane and now we all have to remove our shoes for sniffing before we’re allowed to board. In 1982 seven people were killed because some psycho laced Tylenol with Cyanide and that led to changes in over-the-counter substances and reforms to anti-tampering laws. Twisted Sister dropped an F-bomb on an album full of really bad music and now we have Parental Advisory labels to tell kids which albums they want to purchase (if they still purchased albums). I bet zoos even construct larger moats around Gorilla pits now.

Even perverted imaginations are changing laws. Right wing nut jobs who can’t stop thinking about gay sex imagines an adult males posing as a transgender female so they can commit rape in a public restroom. It hasn’t happened but they’re still creating hate laws to prevent it.

Back in the early 1990’s Republicans attempted to create a federal law to protect the American flag. They were all upset about people burning and desecrating the flag. Never mind that burning the flag is federally protected free speech. But during all this outrage and rush to protect the flag from filthy hippies and unpatriotic pyromaniacs from burning it, nobody was actually firing them up. The law was never created. Our flag is still there. Zippo sales have remained steady.

Laws concerning the flag and bathrooms are designed to distract and to get people to the polls. Republicans in swing states would even put anti-gay marriage proposals on ballots during presidential years so more conservatives would come out and vote, and while protecting us from gay marriage they’d also put the dullest bulb from Texas into the White House. They’re also designed to create divisiveness. Republicans love being divisive while accusing others of being divisive. It’s kinda like them accusing people of playing the race card while they’re the ones doing and saying racist stuff.

Guns are made to kill. People buy them for protection but they’re made to protect yourself by killing someone else. People love to point out that cars kill more people, but cars aren’t designed to kill. An automobiles sole purpose is not to destroy a life. That is a gun’s purpose. Did you actually believe it’s created to shoot a piece of paper with a circle drawn on it? People don’t wage war with feather dusters. 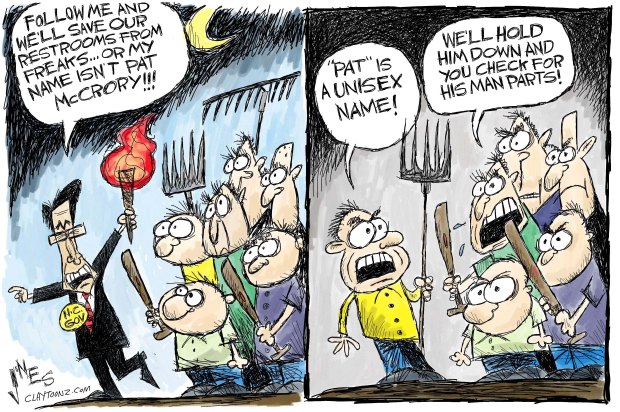 I got this idea a couple days ago but I held off on drawing it as I had already done a bathroom cartoon this week. I stored the idea in a folder I have for concepts I need to hold off on. Some of the ideas come to life while most wither away into obscurity. Some of the ideas get trashed as I have second thoughts on their quality or maybe for another reason. The folder is full of Trump ideas most of which I’ll never draw.

On Friday the Obama administration told public schools across the U.S. to let transgender students use the bathrooms and locker rooms that match their gender identity. Several states, such as North Carolina, Arkansas, Mississippi, Kentucky, and Texas are promptly freaking out.

The bullies say the measure is needed to protect women and children from sexual predators. The Justice Department and others argue the threat is practically nonexistent and the law discriminatory. This has become the Civil Rights issue of the day. Once again the conservatives are on the wrong side.

These conservatives would rather bully, intimidate, and punish kids and others over a nonexistent threat. This is a perfect example of the politics of fear. It’s easier to stoke the fears of the lower informed than to solve actual problems. It works as the more conservative voters are too distracted by the fear of men in dresses entering the little girls room than to ask politicians about funding for education and transportation.

The irony here is that the states are complaining about federal government overreach while the state of North Carolina tells local municipalities that they can’t enact tolerant laws. Conservatives are deaf to irony.

It seems the only jobs Republicans will create are for bathroom police. It’s funny they never lobbied for surveillance of churches where pedophilia has actually taken place. 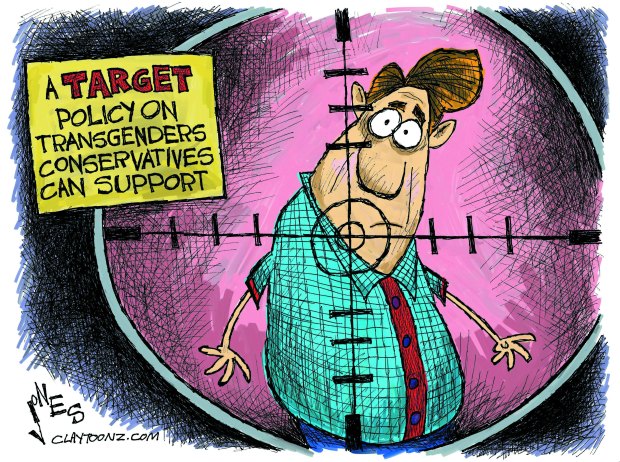 You know there’s gonna be that one person who sees this cartoon and believes it’s encouraging conservatives to hate on Target, transgenders, and that I’m some ultra-creepy-conservative. People like that never look at your body of work.

Target, the department store, will not monitor their restrooms. They will not scapegoat transgenders or really anyone. Basically there will not be any toilet Nazis at Target. In response to this conservatives have mounted a massive boycott on Target. The likes of this boycott hasn’t been seen since these same groups boycotted the Catholic church, where children were actually molested. I made that last part up. They never boycotted anyplace where children were actually molested.

Your child stands a greater chance of being molested in school, church, in your own home, than in a public restroom.

It’s also bizarre that these same conservatives who want laws and signs barring one gender from the other genders’ restroom, argue that gun laws and signs don’t work. If a gun owner sees a sign at Chipotle barring guns, he’s just going to ignore it and walk in there anyway. If a pervert wakes up with the idea of going to Target and enter the wrong bathroom just to go perverting around will, stop upon seeing the sign and say “dammit. I really wanted to go in the women’s restroom with my penis but there’s a sign prohibiting it. Damn again!”?

I’m going to repeat an argument I made last time I covered this issue: Don’t let your small child enter a public restroom alone. But guess what. North Carolina might have made that bit of parenting illegal. If you’re a father and your small, very young, daughter needs to use a public restroom then you would typically take her into a stall in the men’s room. According to North Carolina, that’s illegal now. Good job, North Carolina.

I have a suggestion for conservatives and liberals alike. Stop worrying about public restrooms. Transgenders have been using whichever restroom they felt suited them ever since public restrooms came into existence. You’ve shared them before and didn’t realize it. Stop making laws about it. Stop making policies about it. Have a men’s room. Have a women’s room. Let people go about and do their business without being scapegoated for a problem that doesn’t exist.

Stop being a bully and worrying about things that never happen. 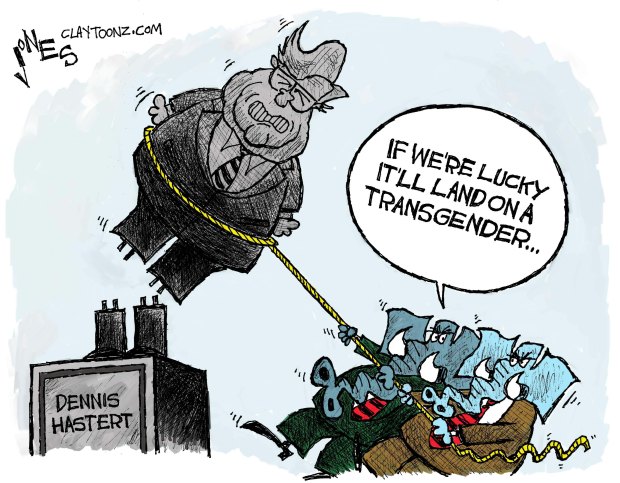 Back in the late 90’s during the Clinton administration Republicans spent over $70 million investigating a land transaction the president was involved with while he was governor of Arkansas. Republicans, who are always champions of limited government spending, only uncovered a consensual sex act between Clinton and an intern, so they impeached him and slut shamed her.

Unfortunately for them their Speaker of the House at the time was Newt Gingrich, who had his own sexual infractions, so he resigned to be replaced by Bob Livingston, who also had sexual transgressions. How are uptight Republicans supposed to impeach a guy for sex when their leaders are also bedroom bad guys? They figured it out by making a pedophile their Speaker.

Dennis Hastert was a high school wrestling coach before he went to Congress. During that time he was a pedophile. I’m supposed to write “accused” but screw that. He’s a pedophile. He put a Lazyboy recliner in the boys shower. That’s some serious commitment to watching young boys get naked and lathered up. You would think the barcalounger in the shower would have raised suspicions and concerns. Hell, a stool should have raised awareness or how about the coach even hanging out in the shower with the boys?

Hastert is accused of molesting five boys while he was a coach. His defense team says all he did was a “groin rub” to one of the boys. OK yeah, all is forgiven because rubbing a young boy’s groin regions is perfectly understandable, right? After that Denny massaged the young boy’s back and slept in the same bed. What? The claim is the teen had a groin pull so Hastert massaged it. Sounds like his groin was pulled alright.

So Republicans, those champions of saving us from sex freaks, are writing legislation bullying and shaming transgenders over what bathrooms they use in public. These Republicans are about as good with government staying out of our private lives as they are with fiscal matters.

Republicans lead Democrats 10-1 when it comes to sex scandals. Maybe they should stop worrying about what other people are doing in their private lives. They could spend the free time studying rape and understanding that definition.