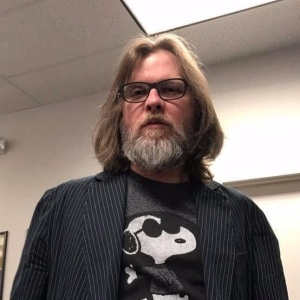 Clay Jones was often sent to the principal’s office as a child for making fun of his classmates and teachers with his drawings. He discovered at a young age he had a knack for making fun of people and he decided later to make it a career and focus on those more deserving of his sarcastic rage, politicians…mostly, Republicans. He went from drawing simple Crayola caricatures of his friends in elementary school to full-sized comic books by the time he was in high school to being in the pages of Newsweek in his 20s.

His sharp satire first earned him freelance work at The Panolian in Batesville, Mississippi, where he eventually became their editorial cartoonist. Jones spent the next seven years in Mississippi working for The Panolian (1990-1995), the Daily Leader in Brookhaven (1995), and freelancing for the Mississippi Business Journal, all while self-syndicating his work across the nation from Jackson. In 1997, he accepted an offer to join the Honolulu Star-Bulletin temporarily to fill in for their staff cartoonist, Corky Trinidad, while he took a year-long sabbatical in Asia. While at the Star-Bulletin, he produced two cartoons each day, six days a week, which included one on the front page on a local issue produced in full color, while the second was in black-and-white on the editorial page. In 1998, he joined The Free Lance-Star in Fredericksburg, Virginia where he drew cartoons and produced a daily blog. He was laid off in 2012 with hundreds of other journalists at his paper and thousands of others throughout the country due to the economic downfall of the entire industry.

Jones was with Creators Syndicate from 2000 to 2013 when he decided to create his own syndication, which distributes his cartoons to daily newspapers, weeklies, alt-weeklies, and online news sites throughout the country.

Jones is currently drawing one cartoon each week for the CNN Opinion Newsletter.

He has also recently created commissioned cartoons and covers for Orlando Weekly, the City Pulse (Lansing, Michigan), The Seattle Times, The Daily Dot, The Independent (St. George, Utah), the Longview News Journal in Texas, The Herald Dispatch in Huntington (West Virginia), the News-Enterprise in Elizabethtown (Kentucky), the Dorchester Reporter (Massachusetts), and the Emmitsburg News-Journal (Maryland). He’s also done special projects for The Barbara Bush Foundation For Family Literacy and the New Labor Forum. His work has also been seen on the Rachel Maddow Show and Velshi and Ruhle on MSNBC.

Jones was a finalist for the Herblock Prize in 2019 and a finalist for the National Headliner Award in 2020. Sometimes, he wins too, and has been the recipient of numerous awards in Hawaii and Virginia, and three consecutive first-place awards from the Mississippi Press Association. In 2018, a cartoon drawn for The Highlands Current in New York  placed in the New York Press Association’s Better Newspaper Contest, and won Best Cartoon in the National Newspaper Association’s Better Newspaper Contest.

He cartoons have entertained readers in The Washington Post, The Los Angeles Times, The New York Times, The Chicago Sun-Times, The St. Louis Post-Dispatch, USA Today and Newsweek magazine.

A collection of his work and professional papers has been archived at the Mitchell Memorial Library at Mississippi State University. He has published two books, “Knee-Deep In Mississippi,” published in 1997 by Pelican Publishing, and “Tales from the Trumpster Fire,” published in 2019 by Mr. Media Publishing.

Jones considered himself a moderate conservative at the beginning of the career but his views shifted over the years to the point that today, he is a far-left liberal and proud of it. He has never been a member of a political party, and never will be. He believes it is his daily goal to lampoon authority and make it look as ridiculous as possible. “My cartoons do not tell readers what they should believe. I hope they simply challenge people to think.” He still believes in journalism ethics and refuses to participate with political campaigns or work with political activists. He does vote.

Jones was born in Fort Hood, Texas, and was raised in Louisiana, Illinois, California and Georgia. He attended Belhaven College in Jackson, Miss. He has a son from his first and only marriage. Jones is single (hello, ladies) and is currently living in an apartment in Fredericksburg with a lot of guitars.

Occasionally, he is still sent to the principal’s office.