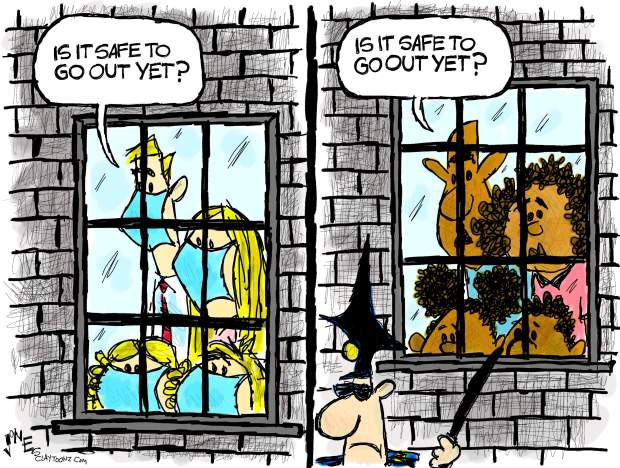 It’s not enough for white people to not be racist. White people now have to, need to be anti-racist. You need to speak out. It’s not enough that you “don’t see race,” and you’re probably lying when you say that. It’s OK to see race. But what you and I need to do is to join the fight against racism.

George Floyd was killed by police. Before they killed him, the police tortured him. They tortured him for 9 minutes in public, in broad daylight and in front of a crowd. The police believed they could get away with it. So far, they kinda-sorta have gotten away with it. While the cop who killed George Floyd and the three others who stood by and watched were all fired, none has been arrested or charged for any crimes. That is white privilege. It’s also police privilege.

While Donald Trump, as president (sic) has said he didn’t like what he saw, he has refused to say the police should be arrested or charged. Keep in mind, he’s screamed for President Barack Obama, Hillary Clinton, Congressman Adam Schiff, and even MSNBC Morning Joe host Joe Scarborough to be charged and arrested. That is white privilege along with moronic privilege.

When white people see what’s going on and they have more to say about a riot and burning businesses than they do about the killing of George Floyd, that is white privilege. That is also racism.

It’s white privilege to look at burning buildings and to just pass it off as not having anything to do with the killing of George Floyd.

It’s white privilege to scream having to wear a mask in public is a violation of your liberty and civil rights while not fighting for other people when their right to vote has been taken away.

It’s white privilege to look out your window and look forward to the day that we can socialize with friends, go to a bar or a restaurant, and return to normal.

When a black American looks out their window and see police killing another black man, they see we are returning to normal.

And when we can all go back outside, it will be back to normal for them because they don’t have our privilege.

White people, you have white privilege. You couldn’t get rid of it if you wanted to. But you can use it to help our fellow Americans get that same privilege. The racist dog lady weaponized race. Weaponize your white privilege for our fellow citizens because it’s just as much their country as it yours.

It’s not enough to not be racist. Be anti-racist. 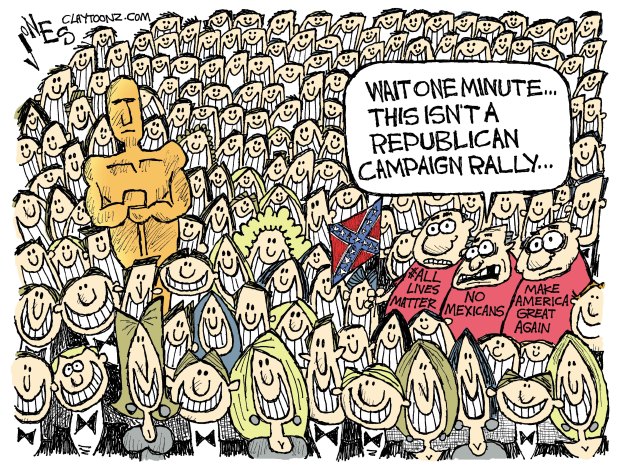 I don’t know who would be offended more with this comparison. Liberal Hollywood or Republicans. Republican friends of mine attempt to claim that their party attracts blacks. They’ll point out a black candidate as if that’s an indication. It’s kinda like the Green Bay Packers. Just because there are black guys playing on the team doesn’t mean there’s any in the stands at Lambeau Field. If there’s one African American attending a GOP event, the camera will zoom in on them repeatedly.

I really don’t care that much about the Academy Awards. I never watch though I will root for someone. Usually I hope someone who’s never been recognized will win a statue, even if I haven’t seen the movie they’re nominated for. Last year I was rooting for Michael Keaton for best actor for his part in Birdman, though I hadn’t seen the movie yet. He didn’t win and I eventually saw the movie and he was excellent.

Though I don’t care about which individual wins an award, especially the Grammys (that’s just a glorified popularity contest that once gave the heavy metal Grammy to Jethro Tull, a flute blowing folkish band), I do care about exclusion. While individuals don’t have a right to be upset when they’re not nominated, or they don’t win (they can be disappointed), everyone should be angry when recognition eludes an entire race that has actually made an impact in the industry that’s serving out the awards. This is the second year in a row where they have failed to nominate one black actor. That’s 20 nominations (I just looked that up), 40 if you add both years. This “academy” gave one of their awards to Matthew McConaughey. While I did not see the movie he won the award for (because Matthew McConaughey was in it) I do know who he is and that he is the suck of all sucks. If they could give one to that ass clown then couldn’t they find one black actor worthy of a nomination?

I won’t be watching the Oscars this year. Is it boycotting since I never watch the Oscars?

I had this concept for a cartoon several days ago. I mention when I think I’m the first one to cover a subject. With this one I might be the last.