I am very happy CNN chose this cartoon out of the ten or so ideas I had sent them. In fact, it may be the last idea I sent their way. I think the story progressed throughout the day on Friday, making the cartoon even more relevant.

I spent Thursday sitting in a hotel in Raleigh sending ideas to CNN. I had an event that night, which I was two hours late for. But, that’s OK because I like being fashionably late. After it was approved, I went to join several of my cartoonist colleagues in paying our respects to a departed cartoonist. The next morning, I drew this on the train but you probably already read that horror story in the previous blog.

I like bringing back “stable genius.” If you have to tell people you’re smart, you’re probably not. If you ask people to tell others how smart you are, people who work for you, you’re not smart. Donald Trump is neither smart, stable or a genius.

A genius doesn’t negotiate himself into a deal where he receives nothing, which is what Trump did with Nancy Pelosi. Pelosi has Trump’s number and she proved it during the government shutdown Trump created. Now, he’s having tantrums and saying he won’t work with Congress on anything as long as there are investigations into his corruption. What he’s saying is, he won’t work with a Congress that invokes oversight.

Trump is upset that Pelosi accused him of a coverup, something his own Justice Department has accused him of. Trump says he doesn’t do coverups, yet he’s lied about paying off pornstars and Playmates, lied and hid his negotiations to erect a Trump Tower in Moscow, lied and hid his attempt to bribe Vladimir Putin, lied about Trump University and his fake charity which he stole from, and is preventing people from testifying to Congress about a report that he claims exonerates him. On top of all this, he won’t release his taxes. But other than all that, he doesn’t do coverups.

The best Trump can do to convince people he’s stable or smart is to have other people say it, even if those people are those he pays to say it. 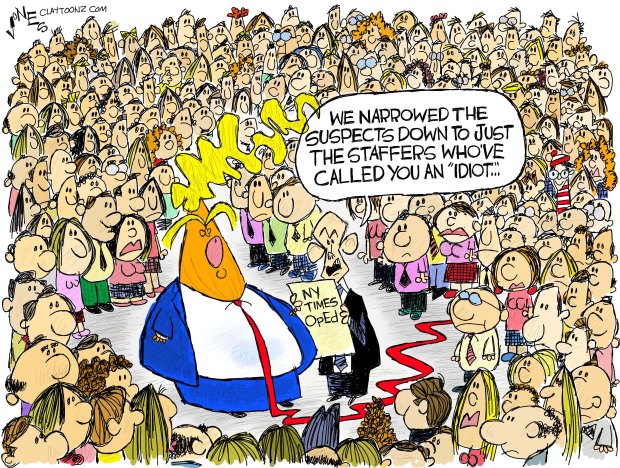 I honestly thought the identity of “Anonymous,” the White House staffer who wrote an op-ed published by The New York Times Wednesday night, would have been discovered by noon on Thursday, and by 6:00 P.M., there would have been a very public firing. But, I forgot who we’re dealing with here?

I made a joke on social media that if they conduct their search among the more literate members of the White House staff, then it’d be a very short search. But in reality, they gotta search through everyone working for Trump who believes he’s an idiot. In case you haven’t noticed the consistent theme coming from each book and reports in news outlets covering the White House, there’s a lot of people working there who believe Donald Trump is a world-class idiot, mentally incompetent, and without any idea or ability to do the job of president. The only people who don’t believe Donald Trump is an idiot are his fellow idiots who still support him. You can spot them at rallies and on Fox News.

While all of D.C. is playing a parlor game of trying to figure out the identity of Anonymous, the White House is turning the place upside down. Over thirty officials have publicly stated “not me,” just as Mark Felt swore during Watergate that he wasn’t Deep Throat.

Senator Rand Paul has suggested that the White House start forcing employees to take polygraph tests, which would probably explode by being in the same building as Donald Trump. Trump, has called the writer a traitor and demanded that the Times report his identity in the interest of national security. He’s even floating the idea of the Justice Department going after the Times for the identity.

The anonymous op-ed hasn’t proved anything we don’t already know. It’s also proving that Trump wants to be a dictator, use the Justice Department to go after his enemies, and turn our nation into a banana republic. Trump’s statements on going after “Anonymous” proves he should be removed from office.

Senator Elizabeth Warren believes the 25th Amendment should be implemented. I agree. Staffers from previous administrations weren’t writing anonymous op-eds claiming the president was an idiot, and they were working to thwart the damage he was seeking to inflict upon the nation. Senior members of other administrations didn’t have to deny they called the president an “idiot,” a “fucking moron,” or “retarded.” No one had to deny calling him “childish” and a “baby.” The reason all this is happening now isn’t because there’s a “deep state.” It’s because Donald Trump is a vile and horrible human being who is the worst president in American history. He needs to be removed.

Trump warns us that if he’s impeached, then the blame lies squarely on those who didn’t vote for Republicans in the upcoming midterms. When it comes to taking that blame, I won’t be anonymous.