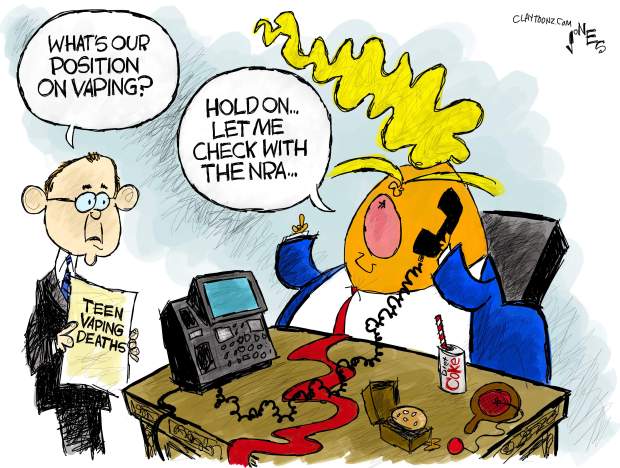 Vaping has been promoted as safer than cigarettes. Now, with six deaths and hundreds of previously healthy teens and adults suddenly stricken with respiratory damage, all blamed on vaping, there’s talk of banning the battery-powered e-cigarettes in the United States.

Vaping has become very popular. It’s a way to smoke without the smoke. Some kids even sneak the devices and puff on them in classrooms. They come in all sorts of flavors, like mango, tangerine, creme, bubble gum, and even Fruity Pebbles. Now, with a push by Melania out of fear her son, Barron (who Trump referred to as “her son”), Donald Trump is proposing a ban on flavored e-cigarettes.

Vaping is not healthy. Granted, health professionals who tell you vaping is bad do acknowledge it’s safer than cigarettes. But, banning the flavors isn’t a solution. The health risk is not in the flavors. According to doctors who have studied the issue, the real risk appears to be vitamin E acetate, which is a derivative of THC-containing e-cigarettes, and other contaminants found in black market products. Banning the flavors is an effort to make us feel good that we’re doing something. By the way, we still haven’t banned actual cigarettes which kills 480,000 Americans a year. Vaping has been accused of killing six. Back in the 1980s, we banned lawn darts after they killed three children.

The thing is, like cigarettes, there are already bans on selling e-cigarettes to minors. That didn’t stop the tobacco companies from targeting minors with cartoon characters until all the states banned together and sued them in the 1990s.

The worldwide market for vaping products was estimated at about $11.5 billion in 2018. Sales of Juul, one of the top brands, rose more than 600% in a year to $16.2 million in 2017. While vaping is marketed to help people quit smoking actual cigarettes, it’s now being blamed for creating nicotine habits among young people. There was a decline in tobacco use among young people for several years until e-cigarettes came along. Now, the use of tobacco among kids has risen 38% in recent years.

So, with a feel-good ban coming, what are vaping companies to do? For starters, they should take about $30 million of that $11 billion or so they made in 2018 and put it into the Trump campaign. Maybe while lobbying in Washington they can stay at the Trump Hotel.

The National Rifle Association spent $30 million on the Trump campaign in 2016 (with some of that money coming from Russia). When Trump starts talking about restricting sales and background checks on guns, he’s mouthing off before Wayne LaPierre, the chief executive of the NRA has gotten to him. He’s talked big about background checks twice before backing off after the NRA has grabbed his ears. The Republican U.S. Senate is refusing to do anything about guns because they actually don’t know where Trump stands. It depends on what time it is.

Between 1999 and 2017, over 38,000 children died from gun violence. In 2018 alone, 73 children under the age of 12 were accidentally killed by guns. We banned lawn darts after three kids died. The lawn dart lobby sucks. Now, after six deaths that may not even be the fault of vaping is going to lead to the ban of flavored vaping. Why isn’t it “too soon” to talk about banning vaping? Where are the thoughts and prayers?

Donald Trump doesn’t care about vaping. He doesn’t even care about guns. He cares about the dollars and his ego. If for some reason the NRA decided to defend vaping and called Trump, he’d backtrack on his previous comments against vaping. His wife would never mention it again. It’d be like that time Ivanka tweeted criticism about Roy Moore then shut up after her daddy endorsed the pedophile.

Trump is owned by whoever spends money on him. It’s why Saudi Arabia can kill journalists without consequences. Hopefully, someday we’ll get to see his taxes and find out exactly how much Russia has invested in him. Trump is the most corrupt president in American history.

Don’t be surprised if in the future you see an overabundance of orange vape flavors. Just don’t inhale.