James Holzhauer is on a 22-game winning streak on Jeopardy (in case you’re a Republican, that’s a game show). Holzhauer has accumulated $1.7 million in winnings and has given the game show higher ratings than, get this, The Big Bang Theory and hold on to your lugnuts, Game of Thrones. No shit.

Holzhauer owns the 10 highest single-day winnings in the show’s history, but he doesn’t own the record for most Jeopardy money…yet. That honor belongs to Ken Jennings.

James Holzhauer and Ken Jennings are smart. They have big brains. Let’s talk about someone who does not.

After being subpoenaed to testify before the Senate Intelligence Committee, Donald Trump Jr has agreed to limited questioning from the senators. Wait. How the hell did that happen? He gets a subpoena and agrees to limited questions? Have you ever been called to court and refused or negotiated your terms on testifying? Even Marisa Tomei didn’t get that deal in My Cousin Vinny. Is this a nation built to serve rich douchebags or what?

The deal is, Trumpy Jr will testify if the topics are limited to a half dozen to maybe a dozen (depending on which source you use), and he only has to stay two to four hours. He’s a busy guy who doesn’t have time for accountability. He has a shyster corporation to run, big game animals to shoot, and conspiracy theories and Nazis to retweet.

Trump Jr. refused to be questioned by Special Counsel Robert Mueller’s team. For some reason, Mueller didn’t subpoena him. He testified once before the Senate in a private session and later agreed to return, which he reneged on.

Daddy Trump has wailed that his son is being mistreated and that he had already testified in private for hours upon hours. Yeah, that’s why he’s gotta come back. It’s that testimony that’s raised questions. The Mueller Report contains testimony from more than one witness that contradicts Jr. If you tell the cops you didn’t do something and then ten people contradict you, the cops are probably going to want to talk to you again.

Like his father, Junior has a history of lying. Before news of the Trump Tower meeting came out, he was on Fox News denying there was ever ANY contacts with Russia, and how dare anyone ask if there were.

Senators want to question Junior about the Trump Tower meeting where he was seeking dirt on Hillary Clinton from Russians, and on the secretive Trump Tower Moscow project. Daddy Trump and Junior have both claimed no Moscow deal was in progress, yet Michael Cohen claims there was, they were working on a bribe to Vladimir Putin, and Junior was briefed on the development at least ten times. I wonder if he ever replied, “I love it?”

Lindsey Graham, who once screamed that Bill Clinton and his people had to comply with congressional subpoenas and who also chairs a committee that issues them, said Junior should refuse to testify and ignore the subpoena. No cognitive dissonance there, right? Lindsey Graham has sold his soul for a bag of orange jelly beans, or are they skittles?

I understand the chairman of the committee, Richard Burr, was under intense pressure from his fellow Republicans to comply with Junior. I mean, Junior’s lawyer was threatening to send a letter. Ack! I suppose issuing contempt charges for a person being contemptible was out of the question.

This president needs oversight and that goes for his stupid children who have aided him in subverting democracy. Can someone please go to jail for breaking the law, selling out our nation to Russians, and lying to Congress?

Greg Kihn is a one-hit wonder with the song “Jeopardy” (but check out “The Breakup Song”), which Weird Al Yankovic covered with “I Lost On Jeopardy.” I’m hoping Weird Junior loses on legal jeopardy. 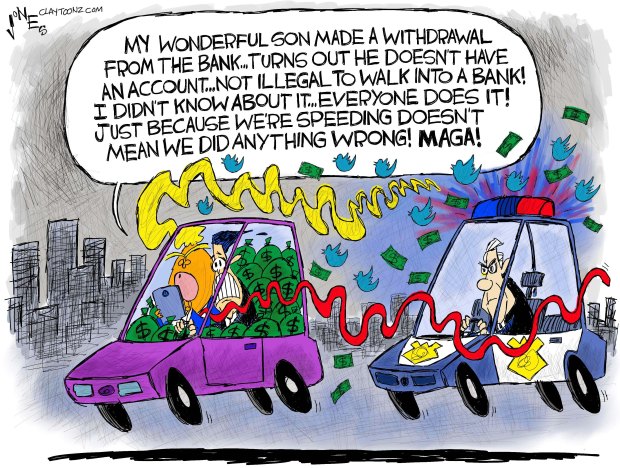 The Donald Trump presidential campaign did not have any contacts with anyone from the Russian government. OK, they did but it wasn’t anything significant. Except, it was in Trump Tower which was the campaign headquarters for the Trump campaign. Oh, and the meeting was attended by Donald Trump Jr., Jared Kushner, and then-campaign manager Paul Manafort. But, it was a total waste of everyone’s time as it was about Russian adoptions. Though, the Russian was promising dirt on Hillary Clinton and Jr. replied in an email before the meeting “I love it.” But, here’s a statement that definitely wasn’t written by the president that the meeting was only about adoptions. OK, the statement was written by the president, but he didn’t know anything about the meeting and it was still only about adoptions. OK, it wasn’t about adoptions and was totally to gain dirt on Clinton, which they didn’t get. Now, it wasn’t illegal and everybody does it.

Did I miss anything? Probably. At this point, even Nixon would be confused with the explanations.

Donald Trump is reportedly very concerned that his “wonderful” son, Donald Trump Jr., may be in legal peril over that Russian meeting in Trump Tower. He should be concerned. Jr. most likely broke the law, he can’t keep his mouth shut, neither can his old man, and they’re both idiots. They should be very concerned.

They argue that collusion isn’t a crime. That depends on a lot of factors. What is a crime is engaging in a conspiracy with a foreign power to benefit your American election. Even if it’s not illegal, it’s treasonous. You don’t even have to get anything out of it to break the law. You just have to try. It’s like arguing that you failed to kill someone, so it’s only attempted murder. No big deal. Everyone does it.

You wonder how concerned Trump is for his son since his latest tweet about the meeting suggests his son committed perjury before Congress.

Trump tweeted, “Fake News reporting, a complete fabrication, that I am concerned about the meeting my wonderful son, Donald, had in Trump Tower. This was a meeting to get information on an opponent, totally legal and done all the time in politics – and it went nowhere. I did not know about it!”

He’s so concerned for his son that he threw him under the bus while making it clear that he himself had no involvement or knowledge about the meeting. Thanks, Dad!

The thing is, it’s not done all the time in politics. Yes, campaigns get dirt on political opponents. Was the Clinton campaign colluding with Russia by paying a former British agent to investigate Trump? No. They did not work or seek help from a foreign government. The Trump campaign did. Trump and his sycophants don’t understand the difference. But, maybe they’ll have a lot of time to think about it.

I have a not-so-bold prediction. This long national nightmare of Watergate with stupid people won’t end without someone named Trump receiving a presidential pardon. A much bolder prediction would be; who and how many?