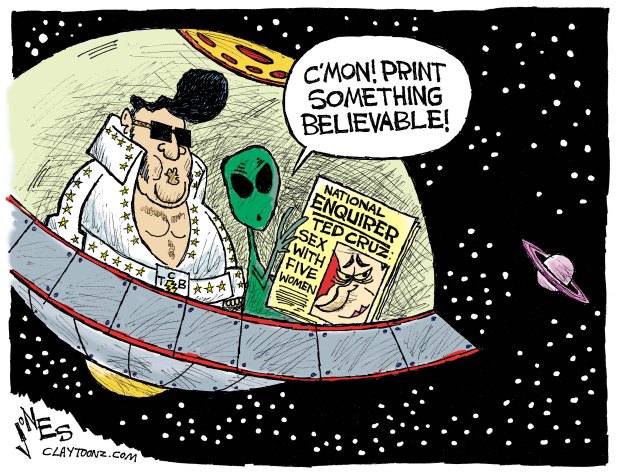 I don’t know what’s less believable. Five women slept with Ted Cruz or that you can find five women who would admit it.

Yeah, I know. I already drew a cartoon this week on the icky bed lovin’ of Ted Cruz but that was before the National Enquirer came out with their story that Teddy Bear has been getting a whole bunch of action on the side. Did you just raise one eyebrow in disbelief or did you get all gleeful at the prospect of dirt on Ted Cruz?

I could join in on that glee business at the expense of Cruz’s political career. It would be awesome. But two things: I don’t care about his sex life and I’m much more concerned about the disaster he wants to inflict upon this nation. Four years of a Cruz administration would force the entire nation to do a walk of shame. I’m just not really interested in living in a theocracy led by Ted Cruz, whose wife and father believe is a divine messenger from God. Yeeks! That is a bigger concern than where he’s been putting Little Ted.

The second thing is, I don’t believe the Enquirer story. You’ll bring up the argument that the National Enquirer has been proven right on John Edwards, Gary Hart, Tiger Woods and a few others. OK so they’ve been right maybe three or four times…throughout their entire history.

The National Enquirer has a silent policy of no criticism of Donald Trump. They have also endorsed Trump which seems fair since their publication is probably his only news source, and odd that the National Enquirer is endorsing. That might be a reason not to vote for someone. The guy who provided this salacious information on Cruz has a history of playing dirty political tricks and he’s a good friend of The Donald, something Ted doesn’t have, friends.

The only thing that actually makes it somewhat believable is Ted Cruz’s denial. He came out strong, angry and blamed Trump. He even gave Trump a nickname, “Sleazy Donald,” which is fair since Trump keeps calling him “Lyin’ Ted.” I think these two should meet at the bike racks after school and fight it out. Trump blamed Cruz for the super pac ad of his wife, so I guess they’re even there. Trump attacks Heidi Cruz. Super pac attacks Melania Trump. Poor attention starved John Kasich is probably wondering why nobody ever calls his wife a “ho.”

None of the alleged paramours are named. Their photos are pixilated which has everyone guessing. Names are being tossed around. Normal journalism ethics are tossed out in the tabloid’s reporting, which is standard to the National Enquirer.

Sure I could be wrong on this but I’m not going to convict on such shoddy evidence.

How long until Trump brags that his mistresses are better looking than Cruz’s booty calls?

If other cartoonists read my blog they’d probably get six or seven cartoon ideas from each post.