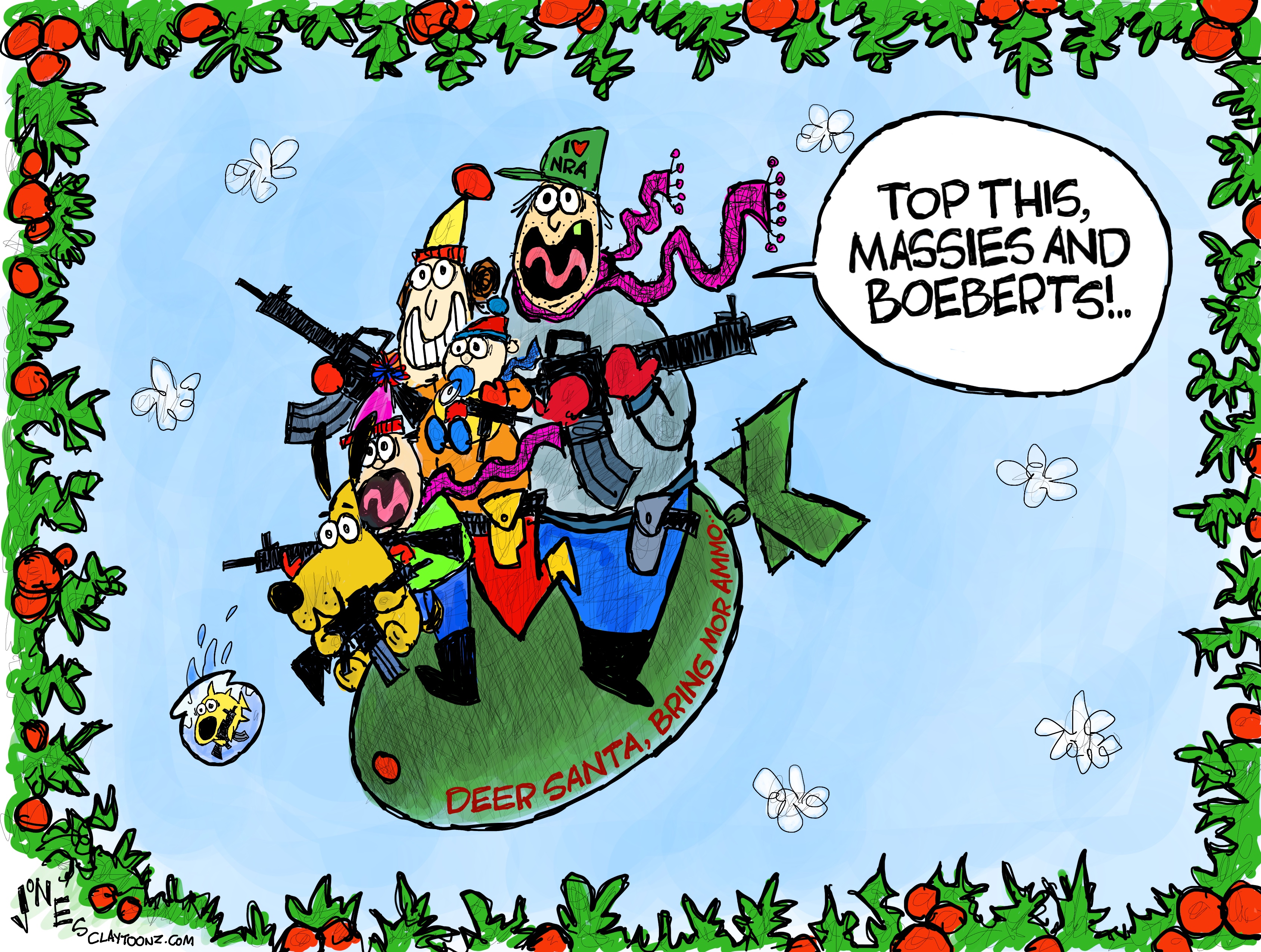 But for people like Massie and Boebert, it’s now to express their Christmas spirits as much as it’s to express how vile they are. These people lost their humanity a long time ago, so how can anyone expect them to understand the spirit of Christmas?

A Trump cultist colleague of mine posted the Massie photo with the text, “Because of a horrible tragedy that takes place in the country, there’s a grace period one has to wait for which to express support for a Constitutional right? Bull!”

First off, if editors tell me “too soon” about doing a cartoon against gun violence after a horrible tragedy, then it should be too soon for fucknut dingleberry MAGAts to be posting photos of them and their children pretending to be gun fluffers.

It’s never too soon for your gun fetish, right MAGAts? If guns came with vaginas, these people would be sticking their thingies in them. In fact, I just gave the assault industry a billion-dollar idea. Fully-armed sex dolls. I demand a cut so I can donate to charities against gun violence.

The other part of my “friend’s” statement I take issues with is his claim they’re expressing support for a Constitutional right. Uh, why did they pick that right out of the many rights in the Constitution? But let me point out once again, you don’t support the Constitution. You can’t make that claim after you tried to overturn an election you lost, committed a terrorist attack against the nation, and tried to install a fascist dictator. You suck when it comes to the Constitution.

Even if you love guns, why can’t you see those Christmas cards for what they are? Can’t you support the Second Amendment while also agreeing that maybe the assault weapons should be in a locked closet during the holidays? Instead of assault weapons, wouldn’t it be nicer if your children were holding kittens?

If your idea of Christmas is to own the libs and trigger people, you’re not really getting it. This is the holiday celebrating the birth of your Lord and Savior Jesus Christ. Sure, I’m agnostic and more of a humanist, but I do believe in the Christmas spirit. There’s nothing wrong with it, which is basically…be nice. Love each other…even your enemies. Even though I don’t believe, I return a “merry Christmas” when one is given to me. I’m not a total dick. Instead of being a gun-fluffing dick, volunteer at a soup kitchen. Donate to Toys for Tots. Maybe adopt a rescue animal. It should not be about having your children coddling a weapon of death to fa-la-la-la about mass murders.

These are weapons of death. These assault weapons were made for just one purpose, which is to kill people. And when your weapon is made to hold rounds and rounds of ammunition that can shoot as quickly as possible in order to kill as many people as possible, it’s a weapon of death. It’s a weapon of mass murder. They’re not toys for you to give your children, even if it’s only for a photo-op to trigger liberals right after a similar weapon was used to kill four children.

This vile behavior from Republicans, at least openly, started with Trump. It’s like how Nazis didn’t start marching in public until they had a friend in the White House. But after Trump made it OK for Republicans to be a bunch of shit-asses by tweeting stuff like, “Happy Thanksgiving…even to Democrat losers” and “Happy Memorial Day, even to skanky Hillary and fat Stacey Abrams,” all bets were off with his base.

I expect there to be a lot of tweets saying, “Merry Christmas, and let’s go Brandon.”

Because they were killed at Oxford High School by a weapon very similar to the one your children are posing with.