To sum up, Washington state had charter schools. Nine across the state to be exact. Then the Supreme Court said they couldn’t be funded from the state education budget. This week the state legislature, the House and Senate, passed a funding bill that supports the charter schools. Democrats joined Republicans to push the bill through. It’s not a done deal yet as it now goes to governor Jay Inslee’s desk.

As you can imagine the teachers’ union in the state opposes state funded charter schools. I don’t always support charter schools or oppose teachers unions. I support teachers, but not just public teachers. I also support education, especially when it gives opportunity to the less fortunate which the charter schools in Washington do.

Friday morning my editor at The Seattle Times emailed wanting a cartoon on this. I sent her my first idea, which was on the schools being funded through the state lottery. 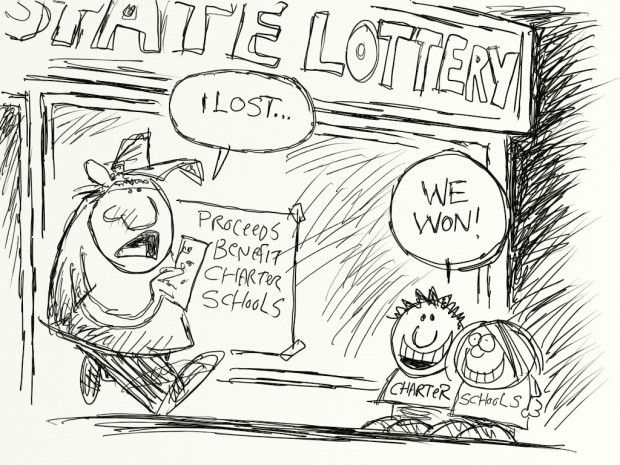 Kate, my editor approved it. But as she approved it she wrote about the number of students from the charter schools who were in attendance for the hearings on the matter at the legislate in the state capitol in Olympia (yes, the capitol of Washington is in Olympia for those keeping score at home).

Even though she approved the idea I thought I could come up with something she would like better. And I did. She liked the first idea, loved the second. I like that. I thought we were going to publish early next week but Kate then said she wanted to run it tomorrow. Yowzah, I really had to get to work. I told her I’d have it to her in two hours and three hours later she got it.

I drew both roughs on my brand new tablet, which is the biggest reason I bought the tablet. This was the first time I drew a rough on it, sent it to an editor, and had it approved for publication.

Here’s the rough that rough.