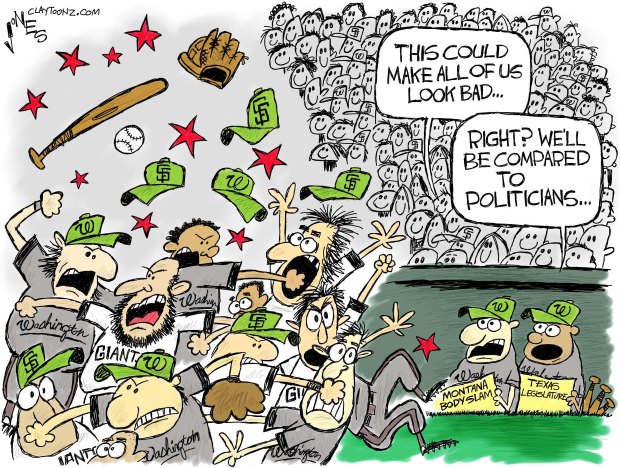 It’s been an interesting, and really odd week for fisticuffs.

First, it got weird in Montana when Republican Greg Gianforte body-slammed a reporter for daring to ask him a question about the Congressional Budget Office report. The next day Gianforte won a seat in Congress. Weird.

Then it got even weirder in Texas where things are usually weird enough. The state legislature started the last day of their session on Monday surrounded by protesters. They were trying to stop the state from banning sanctuary cities.

One Republican House member, Matt Rinaldi, was so unhappy hearing the people’s voices, that he called ICE, (U.S. Immigration and Customs Enforcement) because some of the protesters were brown. That made Democratic House member Poncho Nevarez very unhappy. Poncho almost got punchy with Rinaldi. There was pushing and shoving on the House floor that nearly turned into a brawl. Rinaldi told Nevarez to meet him outside. Then being a big man who invites someone to come outside to fight, he threatened to shoot Nevarez if he touched him. According to some reports, Rinaldi cursed at several Democrats, spit on them, and used a lot of F-bombs. Weird.

On the same day, which was Memorial day, things got weird in….wait for it….San Francisco. I know, right? Yeah, things got weird….er, in San Fran. This time it wasn’t politicians. It didn’t happen in the Castro District. It was baseball players during a game.

Giants pitcher Hunter Strickland pitched a 98-mph fastball right into Nationals batter Bryce Harper’s butt. Owie. Harper stormed the mound and threw his helmet at Strickland, which totally went in the opposite direction. Benches cleared. Punches were thrown. When all was said and done Harper was suspended for four games and Strickland six.

The funny thing is, nobody is defending Strickland. You can’t even find anyone on his own team who will defend what he did. Harper’s not the most loved guy by his colleagues, but you can’t blame a guy for charging the mound after someone pegs him in the ass with a tiny sphere thrown by a major league arm.

Why did Strickland do it? He claims the pitch got away from him but nobody believes him. The Nationals believe it was because Harper hit two home runs off him….three seasons ago. What? You mean during that series the Giants won, then went on to win the World Series? Strickland waited three long seasons to get his revenge?

Strickland might just be an idiot who’s really good at starting a fight but not finishing it. He may have a future as a Republican politician.

Creative Notes and other stuff:

Here are the creative notes: The reason the caps are green in this cartoon is because both teams were wearing green camouflage caps in honor of our troops. Actually, all 30 teams were donning these caps. That has actually created a little controversy.

Major League Baseball is selling the caps. They do that with holidays when they make special gear and schwag for the teams. Usually just seeing the players in the gear is enough to sell the merch. But this time MLB got every team to tweet out a plug for the stuff.

“Today is about honor and respect. Tip your @neweracap to those who’ve sacrificed to keep us safe,” is how most of the tweets were worded.  Yeah, that’ll make the war dead feel better. I bought a fugly $40 cap to thank you for dying. Dodgers pitcher Brandon McCarthy mocked the league with his own tweet which read “generations of soldiers died protecting our country and its freedoms- don’t forget to buy an official baseball hat to say thank you.”

Brandon McCarthy sounds like a real smart ass. I can hang out with a guy like that.